Don't worry, the "penis snake" is totally safe for work. Even though it looks exactly as you'd think.

The unusual species gained its NSFW nickname because of its appearance -- a broad, rounded head atop a thick, cylindrical fleshy body. "But this phallic squirmer isn't a snake at all but an extremely rare, limbless amphibian," notes io9's Lauren Davis.

The "penis snake" was first discovered in Brazil last November where engineers were building a dam in the Madeira River in Rondonia, according to Mongabay. Six of the unusual creatures were found at the time.

Biologist Julian Tupan identified the species as Atretochoana eiselti, a type of caecilian. Legless and lungless, this aquatic animal is thought to breathe through its skin. Tupan, who is working with the company building the dam, disclosed what little is known about the "penis snake" to Brazil's Estadao website, according to the U.K.'s The Sun.

“Of the six we collected, one died, three were released back into the wild and another two were kept for studies," Tupan reportedly told Estadao. “Despite looking like snakes, they aren’t reptiles and are more closely related to salamanders and frogs. We think the animal breathes through its skin, and probably feeds on small fish and worms, but there is still nothing proven. The Amazon is a box of surprises when it comes to reptiles and amphibians. There are still much more to be discovered.”

Previously, the U.K.'s National History Museum stated that no living populations of the A. eiselti had been found and only two preserved specimens were known.

This is not the first animal to be likened to the male genitalia and it will likely not be the last.

LOOK: The A. eiselti found in Brazil. 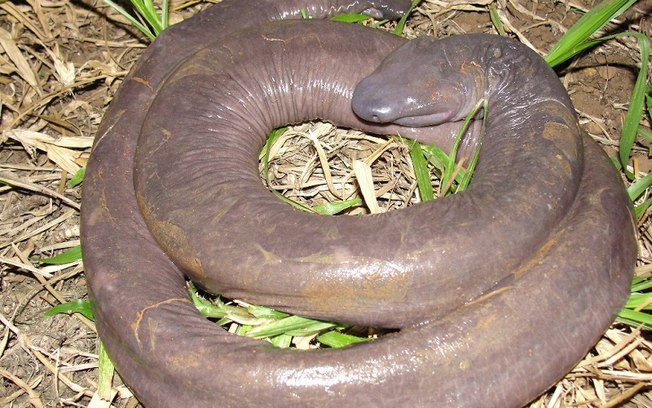