UnderTheButton, a student-run blog at the University of Pennsylvania, got a hold of some emails from underground fraternities at the Ivy League school this week.

We've learned two things from the emails: these guys buy a lot of vodka and are worried about which underground frat that girls like the most. Thanks, UTB!

First, a little primer on these fraternities: they are actually not recognized by the university. The university has a giant, bold warning on the Penn Greek life website telling students to "Beware the Renegades":

A number of organizations exist at Penn that claim to be fraternities or sororities. The may think of themselves in that way, but they are not legitimate general social fraternities or sororities recognized or sanctioned by the University of Pennsylvania. Many of them rose out of the remnants of chapters that were closed down for serious disciplinary action, and the dangerous culture that existed then continues to be perpetuated.

Houses like OZ, Theos, Owls and Apes are some of these "nuisance houses," as the university refers to them. And just because they are underground doesn't mean they don't still have rush and house rivalries, as the emails UnderTheButton captured from the Theos listserv show.

Pledges to Theos were apparently instructed to call one brother's girlfriend, mother and father:

UnderTheButton also got some emails from Oz, another underground house, which show these guys apparently spend a lot on vodka: 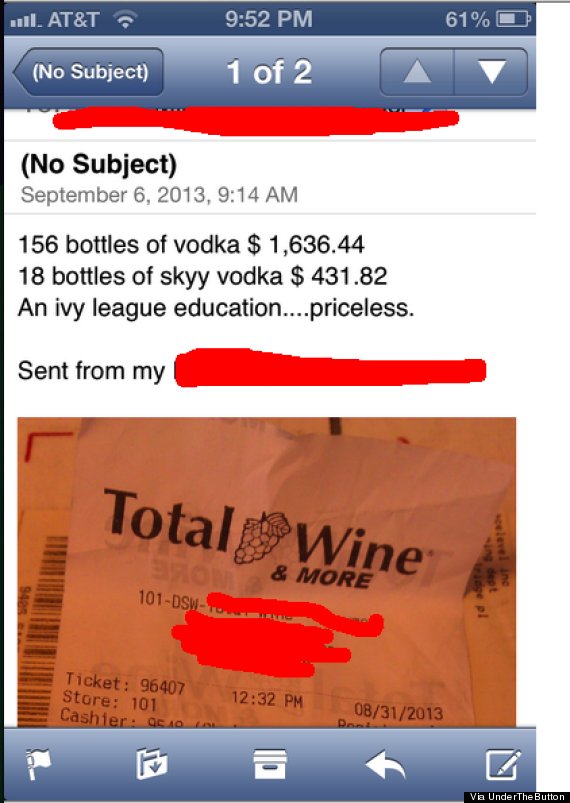 You can read all of the emails over at UTB's website.

Again, since these are underground fraternities, the emails probably won't lead to any punishment. Not to mention, the emails are mostly void of any big, scandalous behavior, much like the recent leak of the listserv from Beta Alpha Omega, an actual fraternity at Dartmouth College that was punished for what members discussed in those emails. The lesson here is fraternities probably shouldn't make their listservs public.