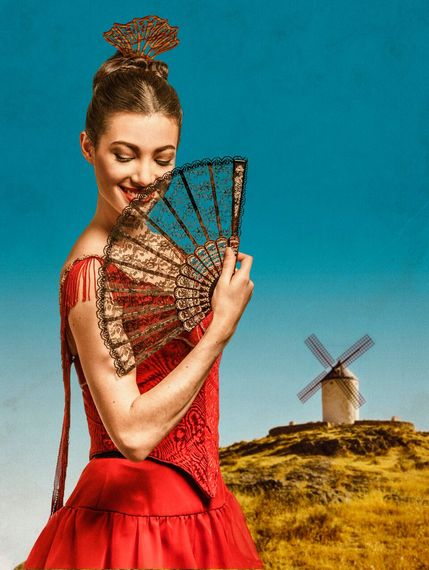 At my first Pennsylvania Ballet rehearsal, I expected to see some of the savagery of the ballet world that defined the Oscar nominated "Black Swan" or the Starz mini-series "Flesh and Bones." Instead the Pennsylvania Ballet's artistic director Angel Corella, who was a principal dancer with the American Ballet Theater for 17 years, calmly put the dancers through their paces without ever raising his voice even though the 50 dancers only had 3 weeks to learn and practice for the world premiere of "Don Quixote". He promises the audience that this production, which will run March 3-13 at the Academy of Music in Philadelphia, "will be like watching a movie."

His preternatural serenity may be a result of being forced to stand up for his art at an early age. Corella,who the New York Times described as a dancer that is capable of turning a performance into a sensation, initially started out taking karate classes, but dropped out after one of the kids in his class got a broken nose. He then began hanging out at his sisters' dance classes. A teacher watching him dance and jump in an empty room immediately took him under her wing at the tender age of six. Unfortunately, the students at his elementary school did not react well to having a budding dancer in their midst.. He recalled, "I did have problems at school. When kids at school found out I was a dancer, they would wait for me after school and beat me up."

You can call this production of Marius Petipa's "Don Quixote," one of the first to be staged by a Spanish dancer, as his coming out party in Philadelphia. Corella, born near Madrid in a small mountain town, sees this ballet as a way of introducing himself and his culture to the audience. He said, "The ballet Don Quioxote highlights the passion that the two main characters have for each other. Even though the father of the girl wants her to marry the rich man across the street, everyone in the town conspires to help the young couple achieve their love. It's a representation of my character, who I am, and our vision of life. I don't know so much now but the Spanish used to think that love and laughter was the way to go. Money was only for the older people that have already gone through life and seen how hard it was. It's a very Spanish thing that we think more with our hearts than our heads and that love conquers all."

Corella has striven to make his "Don Quixote" as genuine as possible. He said, "Barcelona wants to be separated from Spain therefore some of the shops that sell typical Spanish flamenco stuff are not doing very well. I rode my scooter all over Barcelona to those shops and just took everything-beautiful, incredible shawls, castanets, and mother of pearl headpieces- for the ballet. We had the shops that create the actual bullfighter's costumes make similar costumes out of lighter material for the male dancers in the ballet. My mother, who still lives in Barcelona, did all the embroidery for all the bullfighter costumes."

While most ballet sets are spare to give the dancers room to dance, the San Diego Opera Company has lent their lavish scenery for this production. Corella is satisfied that the set reminds him of his towns in Spain that he used to visit with his sister.

The Spanish native has added authentic Spanish dance and musical flourishes to the ballet that make it a must see. He said, "One of the dancers playing the lead Kitri, Spanish born Ana Calderon, learned how to play the castanets at school in Spain. She is going to play a castanet solo. The Flamenco solo at the beginning of the second act has never been done before. I created it having learned how to flamenco in dance school. In the third act, there is a fandango- the female dancers dance with scarves instead of just with their arms."

Run or rather plie to the Pennsylvania Ballet's production of "Don Quixote". More Information about the performances is found here.