Playwright Arden Kass doesn't just want you to know the statistics regarding school funding disparities in Pennsylvania -- that the state's poorest schools receive 33 percent less in state and local funding per pupil than the richest schools. She wants you to feel them.

"When you are presented with news reporting and statistics and graphics, it's very easy to distance yourself from the problems in the public schools if you happen to be a Pennsylvania resident who doesn’t have kids exactly in a public school," said Kass, who currently has one child in the Philadelphia public school system and another who recently graduated. “But what theater can do is humanize things and intellectualize things and get to people’s hearts.”

Kass is the co-creator of “School Play,” which showcases a series of monologues from characters who have been hurt by the slashing of school budgets. Their stories are based on interviews with more than 100 individuals, including teachers, students and parents

The production -- which Kass developed with fellow playwright Seth Bauer and director Edward Sobel -- made its debut in a Philadelphia theater in early April. “School Play” ran for only a few nights in Philly, but it is the hope of Kass and her collaborators that people around the country will use the script to promote school funding in their own communities. The goal is 20 performances of the play between now and June.

Scroll down to listen to audio from “School Play.”

The idea for the play grew out of Kass' volunteer work in 2013 with Public Citizens for Children and Youth, an advocacy group that ultimately funded the development of the show. Kass was helping PCCY in its effort to deliver letters from schoolchildren to state lawmakers. The letters contained pleas to increase school funding. 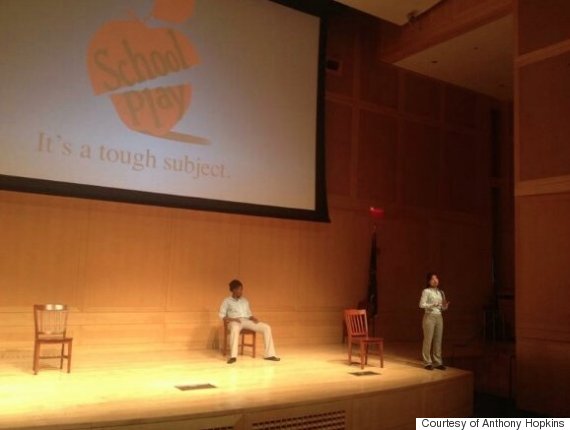 “I found the kids' voices so powerful. I really couldn’t stop thinking about them,” said Kass.

When she mentioned her idea for the play, PCCY jumped at the opportunity to get involved.

“We were looking for a way to bring the school funding crisis happening in Pennsylvania and also across the country into the homes and communities in every part of this state,” said Donna Cooper, executive director of PCCY. “We expose problems, but I was looking for a vehicle that would get out of people’s heads and get into their hearts.”

Below are "School Play" monologues recorded by two of the actresses for The Huffington Post. In the first, actress Jaylene Clark Owens speaks as character Marlene Goebich, a drama teacher.

Do I feel appreciated by the kids? Yes. By the larger district? Not at all, no. I'm a cog in the machine. If I fell over, then some other cog would replace me. Like, I can't imagine that the superintendent wakes up at night and worries that I have paper or I have to run off a test. I'm sure he doesn't worry. Or he doesn't worry like, like -- we're in a costume room, I could walk around the costume room, and what I've paid for, most of what is in this room because that's where it comes from. And did we make enough money to reimburse me? Well, if we do, we do, and if we don't, whatever, it's what it is.

I have three jobs. My other job is I'm a waitress/bartender for private party service and -- I'm embarrassed. And the other one is I do taxes in the offseason. And oh, and then my fourth job I guess like -- in the summer it depends, some years I'm, um, a delivery driver for Primo's Hoagies. Sometimes I'm a waitress. Depends.

I have a doctorate in education. Education and with a specialty in creativity and theater. And I have four jobs to support my job. So I'm single. I spend five, six thousand dollars a year, that's like cash for supplies. Yeah. Can you imagine telling a lawyer, "Bring your own paper?"

A family came to me last year. They were new to the area. From New York. And when I met with them, as we meet with all the new students, something just told me to ask them what was bringing them here. So I started to ask questions, and they started telling me that basically they came here with nothing. And when some people say we have nothing, it's interpreted like they might not have everything they need. And sometimes it literally means nothing.

So I asked where they were staying, and they were staying in one of our housing projects. And I told them, I said, well, I'll gather some stuff up and I can drop it off, I live five minutes away. And when I got there that night, they were sitting on the linoleum floor in the projects. You know, there are a lot of times people think they have it rough or they think that they're poor, but that, in fact, is poor -- when you're sitting on a bare floor waiting for your counselor to come with a pot so you can cook the food that you just got off your food stamps. So I went into panic mode and gathered up a bunch of stuff from people. At least got them some bedding and pillows and things like that.

It's, it's discouraging sometimes whenever people will criticize or critique how we do on standardized testing versus some of the other districts. But our demographics are very different. But we're making gains, we're always making gains. Sometimes it's just not portrayed in such a way where we're at the level that we need to be, but we are getting there. We're making positive ... We’re taking steps to, to improve upon that, and we do, you know, make gains.

There was one student -- he was in 10th grade at the time. He really struggled, like connecting with his peers. He didn’t know how to just be a kid, and it was because of the experiences he was having outside of school. He was living a very rough life. There were some moments when he felt like he was kinda homeless. Other times he just witnessed stuff -- in his real day-to-day life, where people that he cared about got killed, and then he’d come to school and it really wasn’t a safe place. There were a couple of places it was safe. He’d come to my classroom, we’d have lunch.

One day he came to talk to me on a Friday -- we always had a staff meeting on Friday afternoons -- he came to me right at the end of the school day. And I was like, “Hey, man, I gotta go to the meeting.” And then I heard all this chaos out in the hallway -- like stuff like smashing and breaking. And I found him like just losing his mind. I tried to calm him down and he turned on me. Like, he started to attack me. He was just in a blind rage, and I calmed him down, I got him to relax.

But then I recognized that we were about to go into a long weekend. And he was now going to have like three or four days of not having this safe place to go to and not knowing where he was going to sleep and if he was going to have food -- and so he had this like really crazy moment where he just lost his cool completely. And there was something in me that was like, We Need To Put This Kid On The Stage. I saw -- the emotions that I saw coming out of that child in this moment, I was like, if we can channel that and show him how to use that.

We started a drama program. And by the end of the year, he went from that kid who everyone avoided, and he became like the star of the school. He was amazing on stage. He graduated, he went to college, he went into acting. He still looks back with kind eyes. He knew if he didn’t have that after-school program and that summer program, that he envisioned a very different future. He just thought he was going to jail.