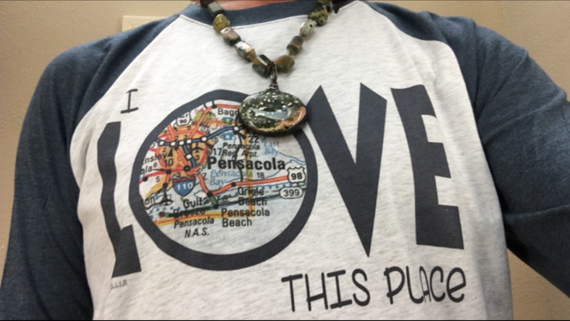 It has been a little over a week since Donald Trump flew into town and campaigned at our local convention center. During that time I have been watching to see what impact his visit would have on local culture and there really has not been a significant buzz. I watched his speech twice on Youtube (3 hours of my life lost forever) and found that for all the general talking points there was no real depth that reached into the community. Yes, there were rally cries for the military and retired but that is just low hanging fruit when you consider what is happening in Pensacola. He spoke of his love of Florida but Pensacola is very, very far from Palm Beach both geographically and socially. If someone in his camp reads this and can pass it on up to the gilded penthouse there are a few more things he should know.

Where is Pensacola? We have been nicknamed "Redneck Riviera", "L.A. - lower Alabama", "The City of Five Flags", "The First Settlement", "Pepsicola", and "The Emerald Coast". We are 300 miles southwest of Atlanta, 200 miles east of New Orleans and minutes to Alabama with some of the most beautiful beaches in the world. The area is rich in military history and we have a stunning naval airbase that is the home of the "Blue Angels". Pensacola is just south enough to have a mild winter but still north enough to avoid that "snow bird" phenomenon that happens down in Naples. There are palmetto fields and old oaks draped with Spanish moss... the is the deep South.

What kind of community activism is building? There was no name dropping of Studer, Levin or any of the other bold figures shaping the landscape. There was no mention of all the giving that occurs in this coastal town. We also have a pretty awesome, youngish Mayor that has made an impact. People are returning to Pensacola pre retirement and itching to make a difference.

What about production of goods? Pensacola has a wealth of skilled retirees and 70 is the new 40 so why not make something of this resource. There are vacancies at strip malls and real estate is cheap so what kind of factories could be created in this area? There is a growing art movement and people looking to express themselves in ways they could not while raising families and paying off mortgages. "Made in Pensacola" can be a real thing.

If Trump is worried about his broad appeal then this is a great place to discuss diversity. Pensacola is multi cultured and everyone lives in relative harmony although there is room for discussion on racism and ageism. There is a huge Christian college but also a huge Memorial Day gay gathering and even though there have been some rough spots along the road; the communities coexist. Trump might have used this opportunity to address the Mexican population. This is going to sound terribly racist but years ago, I noticed there were a lot of Mexican restaurants opening in Pensacola (where as I lived in NYC and there was a Thai restaurant opening on every corner). More than one person informed me that after Hurricane Ivan, the area needed to rebuild but that effort was undermined by the devastation of Hurricane Katrina. It was the Mexican work force that came in and filled the void in reconstruction while their families took the opportunity to open restaurants. And I just have to say this, if Trump gets elected his first family will be the closest thing we have seen to a Mexican soap opera and that is not a bad thing. Ivanka, I love you.

So, Mr. Trump thank you for coming to town but next time come a few days earlier.

-You can invest in local development while enjoying a sunset.
-Gain wisdom from our community elders over a game of golf.
-Add to your art collection while encouraging people to make things.
-Eat fresh seafood while contemplating the BP spill.
-Send your son north to a hunting camp while you visit the zoo.
-Ivanka can open a store on Palafox Street while you catch a boat ride with Melania from downtown.
-You can give your make up artist the day off and rock a real tan.