There may be those who hope that because this tiny U.S. territory is way, way offshore -- situated as it is somewhere between Japan and Papua New Guinea -- events there cannot be a harbinger of things to come here on the mainland. But just two weeks later, much closer to home, Mayor Angel Taveras of Providence, R.I., approved a plan to sharply curtail pension benefits to current workers and retirees in an effort to keep that city out of bankruptcy. Faced with a pension fund that is 32 percent funded, Taveras' pension reforms ended cost of living increases for retiree benefits until the City pension system's funded ratio increases to 70 percent and capped the annual pension payable to any one individual at 150 percent of the median state household income.

Problems with public employee pension plans have been brewing for some time. These plans promise retirees a "defined benefit" that is generally calculated as a percentage of an employee's average compensation over the last few years on the job. The cost of the future benefits are supposed to be budgeted and funded each year by a combination of employer and employee contributions in an amount calculated by the system actuary to be sufficient to fund -- together with projected earnings rate on those contributions -- the future benefits earned in that year. That way, as long as these "normal costs" are budgeted and paid over to the pension trust fund each year, and the assumed earnings rate on the pension fund deposits are achieved, the pension system will be fully funded and future taxpayers will not be required to fund benefits earned by employees in prior years.

As recently as a decade ago, in the wake of the stock market boom of the late 1980s and 1990s, municipal pension plans were in good shape, with many boasting funded ratios in excess of 100 percent. But over the past decade, equity markets have not fared well and pension fund investment returns have fallen short of actuarial targets, averaging less than 6.00 percent over the course of the decade and 1.00 percent over the last year.

As 2010, according to a a study by Barclays, state pension funds on average were just over 60 percent funded, and underperformance relative to actuarial earnings targets has led to new "unfunded actuarial pension liabilities" that are now the responsibility of the sponsoring governments in the same manner as a communities general obligation bonds. The impact of pension problems at the local level has been dramatic, as pension system actuaries have required significant, long-term increases in pension contributions to fund theses new, unfunded pension liabilities.

For example, based on data from the California State Controller, in my city of Berkeley, the employer contribution rate for police -- the largest area of municipal spending -- has grown from 3.6 percent of salaries 10 years ago to 40.4 percent, usurping much needed funds from other purposes to meet these new pension costs. The same issue is affecting funding for government services across the County, according to data from the Stanford Institute for Economic Policy Research. The following graphic illustrates dramatic impact of the growing cost of these new pension liabilities, which will soon consume 10 percent of the entire County operating budget. This translates into a diversion of approximately $200 million that would otherwise be available for spending on public safety, public assistance, healthcare and other critical public programs. 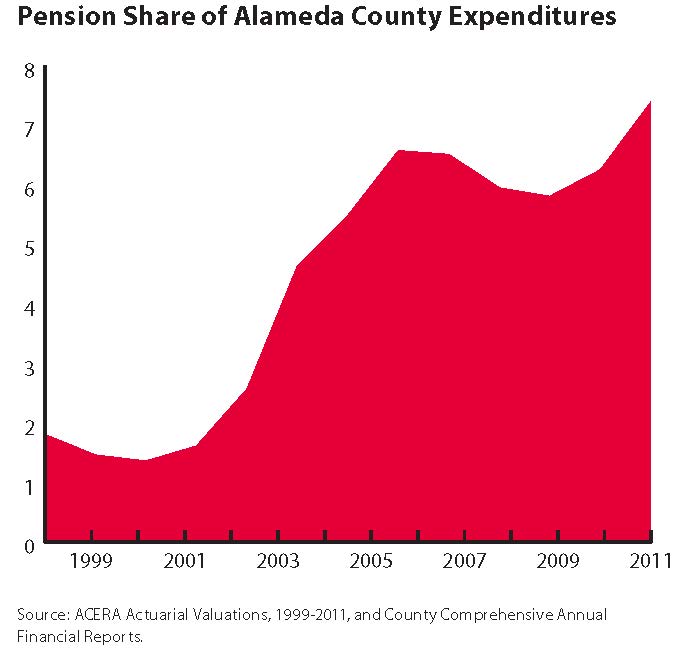 This is not the way it was meant to be. Beginning around the 1840s -- in the wake of defaults by a number of states in the nascent United States -- new state constitutions were established across the country that placed severe restrictions on the ability of states to take on debts or other liabilities that would place a burden on subsequent generations. For example, the California constitution that provides that "The Legislature shall not, in any manner create any debt or debts, liability or liabilities" without a two-thirds vote of the legislature and subsequent approval by popular referendum. However, at the same time, that constitution and the federal constitution prohibit the impairment of contracts, which has been presumed to protect public employee pensions.

The moral dilemma presented by the pension issue is embodied in the apparent conflict between two first principles of governance: Limitations on the creation of debt and the sanctity of contracts. On the one hand, the constitutional framework established in the 1840s placed severe hurdles on the ability of elected officials of one generation to place burdens on future generations. On the other hand, sanctity of contract provisions of both state and federal constitutions provides both the moral and legal basis for non-impairment of vested pension rights.

As defined benefit pension plans have evolved -- by taking on greater investment risk as they increased benefit payouts -- the effect has been to shift 100 percent of that investment risk to the taxpayers. When pension fund investment returns fell short of the actuarial earnings target, new liabilities were created. Essentially, the labor agreements that embodied the pension commitments became a source of new public liabilities, bypassing what in many states are long-standing rules constraining the creation of new liabilities.

Moral indignation lies at the heart of the pension crisis. For their part, workers have for decades paid into their pension plans based upon contractual commitments. Pensioners reasonably believe that they are entitled to what the rules say they are entitled to, that they obtained their benefits openly and legally and properly, and that the benefits are owed to them as a matter of rights.

On the other side are communities that are being forced to cut essential services as the cost of unfunded pension liabilities -- liabilities that appeared as out of thin air -- grab an increasing share of current budgets. Public support for public pensions has been further eroded by stories about abuses of pension rules -- pension "spiking" schemes and double dipping -- that game the system to increase individual payouts.

Although early on the pension crisis seemed destined to play out as a one more Democrat vs. Republican spat, it has migrated beyond party boundaries. It was a Democrat mayor in Providence that approved new, draconian pension reforms, and a Democrat governor in California that is proposing pension reforms that so far have only received Republican endorsement. And last year, San Francisco's elected Public Defender Jeff Adachi -- an unabashed progressive -- ran for mayor specifically to confront the pension question and the huge diversion of funds from core social services that is undermining that city's social service infrastructure.

The pension issue is not going to go away. The financial impacts of pension deficits are going to be felt at the state and local level for years, and will continue to influence the political landscape as politicians are forced to confront that which is manifestly broken. And lying in the background will be the experience of the Northern Mariana Islands, a harbinger of things to come if communities and public workers fail to confront, and ultimately fix, the problem.