Divestment has emerged as a major issue in the past three years, with everyone from universities like Stanford and Syracuse to national denominations like the United Church of Christ and the Episcopalian Church to foundations like Wallace Global Fund and the Rockefeller Brothers Fund (yes, those Rockefellers) divesting in full or in part from fossil fuels that are the foremost cause of climate change. 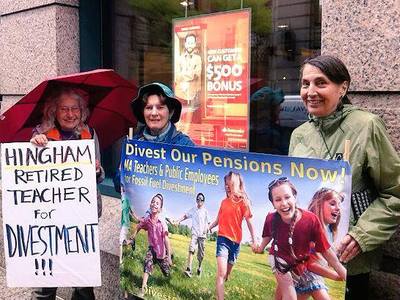 Taking inspiration from past campaigns to divest from South Africa and tobacco, advocates argue that it is immoral to invest in an industry that fuels climate change and exacerbates health problems such as asthma, cancer, and lung disease, causing hundreds of thousands of deaths each year. Advocates also argue -- backed by financial experts -- that divestment is the right thing to do from a business perspective. As we have already seen with coal, with 26 coal companies going bankrupt in the past three years, fossil fuels become dramatically less valuable as governments take action on climate change, and those holding investments in fossil fuels when this carbon bubble bursts will suffer significant losses if they do not take preemptive action.

A race is on to see which state in the country will be the first to do just that, with fossil fuel divestment bills before legislatures in Massachusetts, California, New York, and other states.

In Massachusetts, the first state to divest from apartheid South Africa, a variety of groups that represent public pensioners, including two public sector unions, have submitted a letter to the Massachusetts pension board to inquire how they are evaluating climate risk and what they are doing to protect pensioners against the coming carbon bubble.

While the letter signers -- which include the president of the Massachusetts Nurses Association and the president of Service Employees International Union (SEIU) Local 509, among others -- celebrate some recent steps the pension board has taken, they also make clear that further action is direly needed to protect the pension fund and the broader public from climate risk.

The letter writers are connected to a broader campaign pushing Massachusetts to be the first state to divest from fossil fuels, spearheaded by the 350 Massachusetts for a Better Future network.

The letter was delivered on the morning of July 21, 2015 to the PRIM Board. The text of the full letter appears, below:

On behalf of the member organizations listed below and as participants in the Massachusetts state pension system, we are writing with urgent questions that pertain to the Pension Reserves Investment Trust's (PRIT) investments in fossil fuel companies. Our questions have been informed by the May 9 vote of the Massachusetts Teachers Association asking PRIM to identify fossil fuel holdings and to study the advisability of fossil fuel divestment. Recent pronouncements from authoritative quarters have elevated our concerns:

While we appreciate that you have endorsed new proxy voting guidelines regarding renewable energy and energy efficiency, as well as signing on to the Ceres letter to the SEC, we believe the Board has a fiduciary duty to incorporate climate change concerns into its investment policy decisions in the interest of not only pension beneficiaries, but in the interest of the taxpayers that indirectly contribute to the pension system. We respectfully request a public response, in writing, to the following questions:

Thank you in advance for your attention to this important matter. We look forward to your response.