What exactly is "transgender surgery" anyway? If I had to guess at a definition, I'd say it's any medical procedure done for the purpose of presenting oneself as the sex that matches one's identity.

Talking about any surgery related to my gender identity would get me an eager audience, yet when someone asks if I've had "the surgery," they usually have no idea -- beyond the obvious -- what such a surgery would involve and the thought and preparations that have gone into it.

I'm a transgender male, who happened to transition while I was making my first feature film (Transitioning in Plain Sight). For an FTM like myself, having gender-affirming surgery can mean any one of a number of options: top surgery (some form of mastectomy); hysterectomy; oophorectomy; and/or any of the following bottom surgeries: metoidioplasty, phalloplasty and scrotoplasty. For an MTF, there are a number of options including penectomy, orchiectomy, vaginoplasty, labiaplasty, breast and buttock augmentation, tracheal shaving, facial feminization surgeries and more.

Does any of these sound remotely like a topic that someone outside of a medical conference would want to discuss? So when you ask a transgender person about surgery, I don't think it's any surprise that we don't want to talk about it.

I actually think if you aren't transgender or a partner or parent of, you really don't need to think about transgender surgery at all. There's a fantastic "made-for-a-t-shirt" adage attributable to @emopreteen:

If you're out in public and you can't figure out a stranger's gender, follow these steps: 1. don't worry about it.

It's really that simple.

The same goes for asking whether a person has had "the surgery." I had bunion surgery, and unremarkably, no one seems interested in that. I had surgeries to repair a tibial plateau fracture -- slightly more interesting, but not reality show material.

The more interesting question is why does having or not having "transgender surgery" matter? Would you talk differently to me? Would you not consider me a real man and even subconsciously, insist that I'm a she? It's not where I would catalog myself, and I've been in this body for as long as I can remember and then some. 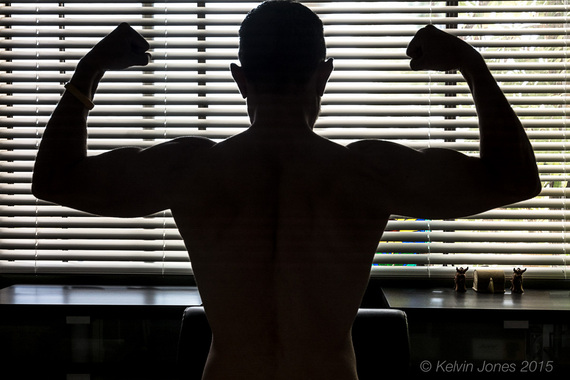 I'm not a specimen. I'm someone who spent years in a body that didn't fit me. I lost the childhood and the adolescence I wanted to have. I sacrificed years of feeling comfortable because I thought if I ignored my discomfort, it would go away. It didn't. Waiting this long to transition has cost me. Even testosterone doesn't affect me the same because I'm deep into adulthood. I've paid the price for distrusting and disrespecting myself. This body is mine and because I've had to fight for it, it means that much more to me. It is also one hundred percent my own business.

When you focus on a transgender person's body, you miss the chance to ask about that person's life, and it is our stories that humanize us, not just transgender people but everyone. You also miss the primary point: my transition is only partly external. The years of struggle happened inside. They weren't about who I knew myself to be but how to move forward with my life considering the years I spent being misperceived by others.

I want connection, and when you ask whether I've had surgery, even if you call it gender-affirming surgery, I feel put on display. The GLAAD Media Reference Guide calls these sorts of questions "prurient curiosity," voyeuristic and distracting, but I don't blame people for curiosity. As activist Janet Mock wrote in an article for Elle, "Curiosity is vital to the growth of our society." I'm definitely a curious person; it's a helpful human trait, especially for someone who makes full-time use of creativity, but hopefully, we remember that we're asking something of another human being, not Siri.

Last year, The Wall Street Journal published commentary by a former psychiatrist-in-chief at Johns Hopkins Hospital who claimed that "'Sex change' is biologically impossible," and that

...policy makers and the media are doing no favors either to the public or the transgendered by treating their confusions as a right in need of defending...

Claiming that this is a civil-rights matter and encouraging surgical intervention is in reality to collaborate with and promote a mental disorder.

This is a professional from a highly respected institution, but the fact that he uses "the transgendered" to identify us -- hint: this is an insulting phrase meant to engender pity and otherness -- shows that any transgender person who decides to have surgery has fought a battle against widely held beliefs equating gender with genitalia and chromosomes. Consider, too, that for as much as society and the medical profession have changed -- and they have -- the number of transgender women murdered this year in the U.S. is at an historic high and nearly half of all transgender individuals attempt suicide. Nearly half.

I want to pay attention to what's important, and I ask that anyone talking to me do the same. I know that even after reading this, some people will still wonder if I've had "transgender surgery" and use that to define me, but do me a favor. Don't ask.