We take our work home with us. Perhaps no field of work better illustrates that saying than animal welfare. Figuratively, of course, but also literally. Those of us who work at humane organizations, almost all of us, share our homes with more animals than anyone outside the field would think sane.

For my home, this not only means dogs and cats and other indoor critters, but also a special squirrel habitat with frequent guests. The Peninsula Humane Society & SPCA takes care of the injured and orphaned native wildlife of San Francisco, San Mateo, and the northern half of Santa Clara Counties in a truly regional program. And since Carolyn started volunteering for that program several years ago, we built (to rigorous standards, I might add, and annually inspected) our own bedroom-sized backyard Squirrel-landia to care for the annual overflow of baby squirrels, animals close but just not quite ready for life on their own.

With two litters each year, the first in the spring and the second late summer to autumn, squirrels are both the annual harbingers of baby wildlife season, and they also are the ones that hear "don't let the door slam you in the butt." This year, our last guest came home just before Christmas and stayed with us until a few days into the new year. 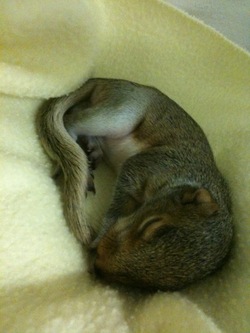 This little girl squirrel was the last of the season, and she came with quite a story. She arrived at PHS/SPCA early October, found alone on the Palo Alto High School football field at about three weeks of age. She fell from her nest and broke her lower right incisor, had a swollen nose and was breathing very heavily/congested from the fall. She had her fair share of fleas and mites and still had not yet opened her eyes.

Once she was stable and breathing better, we sent her home with one of our neonate squirrel foster volunteers who managed her five-times-a-day feeding schedule, a schedule which starts at 6 a.m. and ends 10:30 p.m. 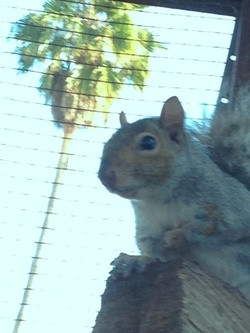 Her eyes opened 10 days later and then back to PHS/SPCA's Wildlife Nursery she came. Sadly, many of this year's baby squirrels were struck with a flu-type virus, a potentially deadly pandemic which caused debilitating diarrhea and other awful stresses on these little bodies. She held on with aggressive supportive care from staff (daily subcutaneous fluids, meds, etc.), and grew up in our nursery -- starting out in an incubator and eventually moving onto a larger wire cage -- for the next month. Eventually she graduated to an outdoor enclosure on the roof of our Burlingame Center for Compassion to acclimate to life outdoors.

Steady progress forward took a big step backwards when, now six weeks after her arrival, she somehow managed to squeeze out of a volunteer's hand and took a serious fall. Landing on her face, she required pain medication and anti-inflammatory drugs for several days. As those more obvious symptoms subsided, it became obvious that the fall had also resulted in ligament and tendon damage (but fortunately no breaks, as x-rays showed) to her right rear leg.

So then came more heavy duty pain meds and more cage rest (where she enjoyed playing with empty toilet paper rolls that had a peanut hidden inside), with additional antibiotics for swelling. Three weeks later, she was finally using the leg normally and was ready for a larger outdoor enclosure to again build up her muscles and demonstrate her ability to live without the intervention of those pesky humans.

Squirrel-landia gave her that opportunity, with its swings and ladders and the company of other squirrels chattering away just on the other side of the screening. It's a lot of work for one squirrel, perhaps, but it is the right thing to do. With a slightly off-key version of "Born Free" sung quietly in the background, Carolyn opened the enclosure doors as we bid farewell and best wishes for a happy and healthy first year of the rest of her life.