The morning after this month's election - as the nation rejoiced and wept - I wearily boarded an early flight to West Virginia. My destination was a whisper of a town in the southern part of the state called Welch. It's the center of "coal country" but that term is a dying one. Nearly all of the coal jobs are gone. Most of the mines have closed as regulations have been tightened and alternate sources of energy have become cheaper and healthier. Drug use is crippling the community and filling the local cellblocks. 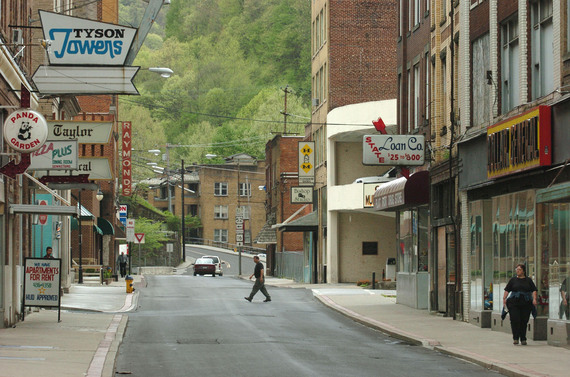 Downtown buildings are abandoned, like a time capsule of days gone by. Modest houses built into the side of the mountains are in ruins. In the Mountain State, down the windy roads from Charleston, souls are crushed; hope is gone.

McDowell County, where Welch is located, used to be booming place, with about 100,000 people. 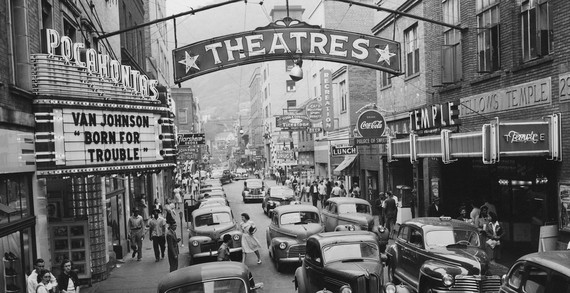 Today, it's one of the poorest counties in the country, with the population cratering to less than 19,000. 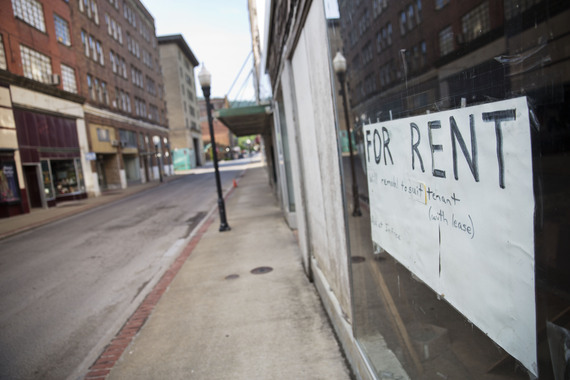 It's a place where only one in three residents work. Where the median household income is just over $20,000. Where more than 40 percent of kids don't live with their parents. Where life expectancy is the second worst in the country and declining. Where less than six percent of adults over the age of 25 have a college degree. Where obesity is the highest in West Virginia.

In her 2005 bestselling memoir, The Glass Castle, Jeanette Walls writes, "Welch was surrounded on all sides by such steep mountains that you felt like you were looking up from the bottom of a bowl." The town's geography leaves people trapped both figuratively and literally. "People got stuck in Welch," she remembers. 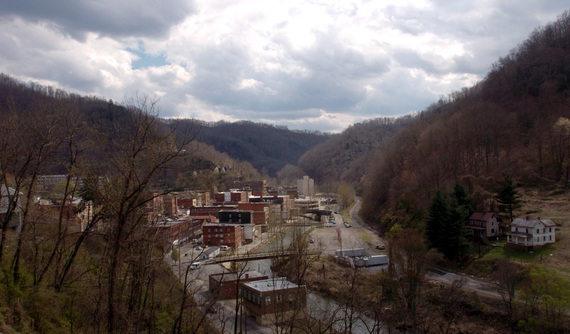 So on Election Day, many folks in Welch and McDowell County, left with nowhere to go but up - saw hope in one candidate: Donald Trump. They overwhelming voted for the populist billionaire, who's promised to bring back coal jobs, nearly four to one. To them, in a region that used to vote Democratic, he's a last grasp at a better life.

I was meeting up with legendary newsman, Ted Koppel, another CBS Sunday Morning producer and two camera crews, as we set out to craft a story for our broadcast giving those in Welch something they have been screaming for - a voice. We were there to find out why they believed - and believed in - Donald Trump. 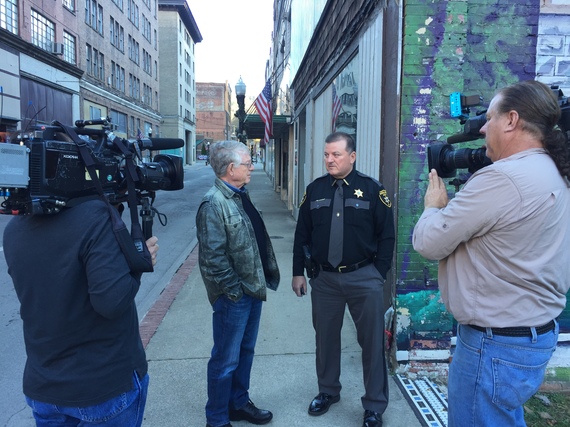 Before leaving New York, we asked around for insight into where we were headed. "Don't go. It sounds like a horrible idea," was one piece of advice, continuing, ''Drugs are rampant down there, and the locals lack external contact with people from other areas. They're not bad people, but they can be socially inept...these people just don't open up to outsiders. They're quite skeptical and they have reasons to be so." All of us working on this story have been in iffy situations but this seemed especially problematic, considering we were outsiders...and the media. We prepared ourselves for an icy reception. 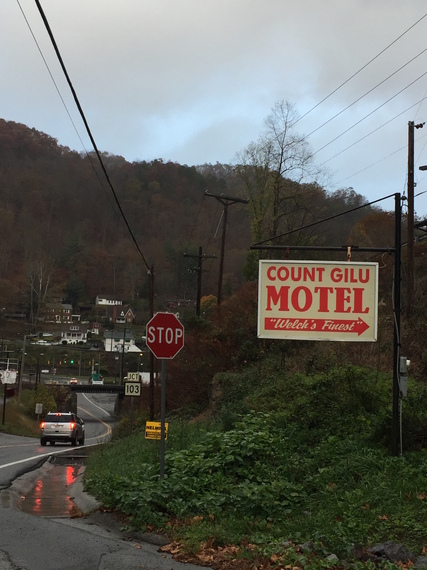 When we arrived in town we checked into the Count Gilu Motel. Welch's finest, it claims. Welch's only, may be more like it. Still, it was a warm bed and a warm welcome. Mona, who runs the place, took us in like we were family. I had no idea that meeting her would come to prove so valuable. Everywhere we went - the only sit down restaurant, town hall, the sheriff's office - we were greeted by a friendly face and an 'anything you need, just ask.' Admittedly, we didn't travel down too many mountainous back roads that may have proven more precarious. Still, what we discovered is that people down in West Virginia may live more simply and their accents may sound a little different from ours but at the core, we are all the same.

And that's the point. Traveling the world as a TV producer and journalist, I've discovered that overwhelmingly most people have good hearts, best intentions and are incredibly kind.

Author Homer Hickham, born and raised in McDowell County in the fittingly named town of Coalwood, wrote the book that was turned into the film, October Sky. He describes his people this way, "We are proud of who we are. We stand up for what we believe. We keep our families together. We trust in God but rely on ourselves."

As we reported out the story of Welch, interviewing characters from both sides of the political spectrum - in a community desperate for a savior - we came across some of the folks Hickham was talking about. A coalmine owner who believes Trump will be coal country's champion. A young jail guard who jumped at the position because jobs in McDowell County are like winning lottery tickets. A teacher turned local politician who was just elected last Tuesday to his first post and believes coal can make a meager comeback. An older Democratic couple - he a retired miner, she a town employee - who don't agree with Trump but hope he can do something - anything.

And then there was Kristen. That's where Mona - the kind face at the motel - reenters the story. Early one morning I went down to see her and chat. We talked about how so many people were looking for work in a place where there isn't any. I told her we wanted to talk to someone in desperate need of a job. Did she know anyone? "My neighbor Kristen," she said. "I'll call her and see if she'll talk to you." Surprisingly, she agreed right away. 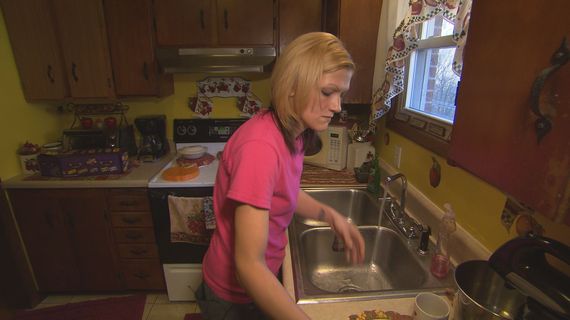 Kristen is 24. She's an unemployed single mother of three children - 5, 3 and 2, with two different fathers. She's thin, blond with dyed black tips and polite to a fault. She dropped out of high school in 9th grade before eventually getting her GED. She and her kids live with her parents in a small, brick house in Welch. Her old broken down red Chevy Camaro sits out front - struts, shocks and breaks shot. It can't pass inspection. There's no way she can afford the few thousand dollars it would cost to fix it, so she and the kids ask people for rides.

Kristen's been laid off from one minimum wage job after another, as cutbacks are made. That's when she can find a work. She's been out of work for six months now, applying to dozens of jobs. But she's out of luck. She cleans the odd house when people take pity on her and hire her for a couple hours. So many people are out of work that her GED can't compete, even for minimum wage jobs. She collects food stamps and child support - about 1,000 bucks a month. She gives part of it to her parents to help pay the rent and keep the lights on. Kristen's father - a miner - lost his well-paying job a while back and with few prospects of finding work, suffers from depression. Her mother supports the family working as a bank teller. She had been working at Wal-Mart but when it closed earlier this year, it took that job, along with about 140 others, and a critical shopping lifeline for McDowell County with it. 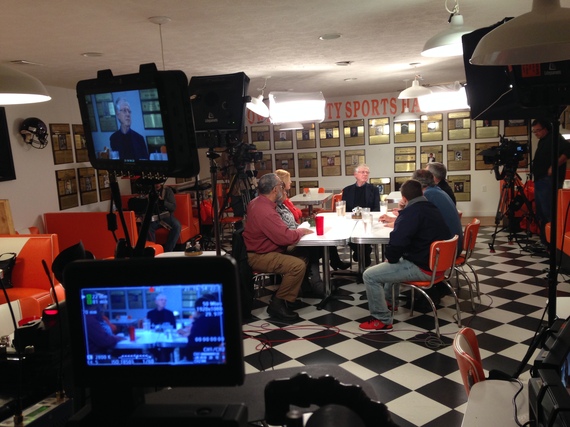 We asked Kristen to come to the local restaurant to join the five other folks we met for a talk with Ted about what's next now that the election is over. She arrived early, nervous, chain smoking and ready to talk. Over and over she thanked us for giving her a voice. That's all anybody wanted around Welch, she said. Someone to listen. She spilled her story, her desperation. What was she supposed to do? She didn't have the means to pick up and leave. She didn't want to leave the only place she'd ever called home but people were being forced to leave to find a better life. As she told this story to Ted, tears streamed down her face, pain pouring from her heart. 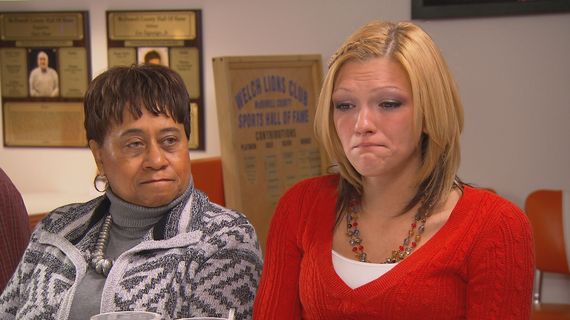 Giving her kids a chance in life was the only thing that mattered to her. And she didn't feel she couldn't give them that chance. At the end of the night, we packed up a couple of boxes of food for her to take for the three little ones sleeping soundly at home. We didn't know if they had much to eat. She refused and refused, too proud to take the food, until she finally caved. Her eyes welled-up as she hugged every person in the room.

The next morning, we went to Kristen's house to shoot a few pictures of her and her kids. As they ate the pancakes we had sent home the night before, she apologized over and over for the house being messy. She does that a lot. Apologizes over and over. Like she has something to apologize for. She has plenty of regrets...but don't we all. Again, she talked of how thankful she was to just have her voice heard. That people in West Virginia are screaming for help.

Then she said something heartbreaking. As we stood there with her father, she asked us why we were being so nice to her. "I've known ya'll one day and you've been nicer to me than anyone has ever been in my life except for my family." It was a profound statement having met the people in the community around her but then again, everyone down there is just trying to survive. My answer was this: "We may be from different places, and live different lives, but at the end of the day people are people. We're all in this together." Everyone just nodded their heads.

The truth is, I saw those three little kids, unknowing of the difficulties around them, and my heart hurt. I saw a dedicated and compassionate mother whose love for her children is as real as the love my extraordinary wife, Lauren, gives our two children and me. 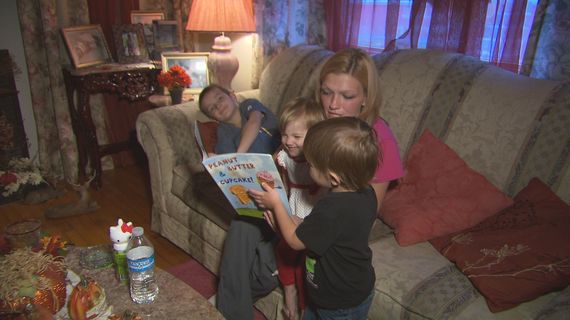 I got a lump in my throat as I watched Kristen snuggle on the couch with her kids and read the book, Peanut Butter & Cupcake. It's a favorite in our house as well. Lauren and I must have read it to our kids, George and Annie, hundreds of times. New Jersey (where we live) and West Virginia - two different lives, two different families, one common goal: teaching our children kindness, acceptance and engulfing them in love. We're both doing the same thing but dire circumstances, life choices and frankly, the luck of the draw, make it infinitely harder for Kristen. At the end of the day, folks like her - and all of those devastated in Welch - regardless of what anyone believes politically, religiously or whatever else, are no different from anyone else.

People are people. Plain and simple.