I remember when Newt Gingrich took a swipe at the Clintons after the1992 election, famously saying that 1600 Pennsylvania Avenue was now occupied by a bunch of "counter-culture McGoverniks."

Within a week I saw a cartoon (may have even been in the New Yorker) showing Bill and Hill sitting around the White House in tie-dye t-shirts, looking trippy, passing a bong. Very funny stuff, taking Newt's inane remark to the most absurd nth degree, showing what a buffoon he really is.

But somehow this latest image on the cover of the New Yorker is out of line? That's silly. It's making the same point as the old Clinton cartoon, using the same satirical technique.

Too many commentators on cable TV, who don't know what they're talking about, keep saying, "Well, I understand what the magazine intended, but the problem is that too many people out in the country believe these false things about Obama."

Whose "problem" is it? It's certainly not the New Yorker's problem, or fault. After all, they're the ones making fun of the right-wing claptrap being spread about Obama.

These commentators are in essence blaming the New Yorker: "Since there are people out there who may not realize it's a joke, a satire, the New Yorker shouldn't do it. They should only print stuff that will be understood by everybody, or else put a big warning label on the cover saying it's a satire."

HuffPost's usually reliable Bob Cesca writes that the message of the illustration is "complicated"...."tricky to accomplish"...."too abstract."

Say what? He adds that "the point is lost without the benefit of the 'it's about scare tactics' press release" from the magazine.

That would be embarrassing and insulting to any decent New Yorker reader worth our salt. We don't need training wheels.

It took me three seconds to get it, and I'm no Upper East Side smugster. The over-the-top caricature, the garb Michelle and Barack are wearing, the U.S. flag burning in the fireplace, the framed portrait of bin Laden on the wall. I pretty much instantly said to myself, "This is cute, an attack on the goofy bullet points coming from the right wing."

And of course, I immediately thought of the cartoon depicting what Newt Gingrich said about the Clinton clan.

Let's move on, there's nothing here to get exercised about.

Postscript: The Tuesday NY Times has a story about the quest of comics to find humor in the Obama candidacy. The New Yorker certainly isn't a comedy magazine, but does satire on occasion through its art and essays, and its July 21 cover illustration draws the following insight in the Times:

Stephen Colbert {of Comedy Central's The Colbert Report} said in a telephone interview that a running joke on his show has been that Mr. Obama is a "secret Muslim"; the New Yorker cover, he said, was consistent with that. "It's a completely valid satirical point to make -- and it's perfectly valid for Obama not to like it," he said.

Bill Maher, who is host of a politically oriented late-night show on HBO, said, "If you can't do irony on the cover of the New Yorker, where can you do it?"

Those guys are right. What happened to our sense of humor? 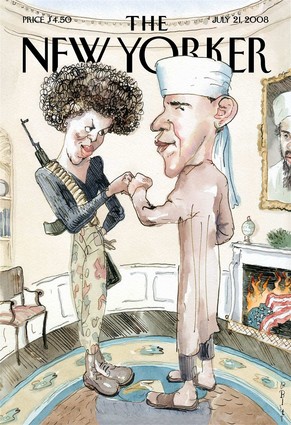