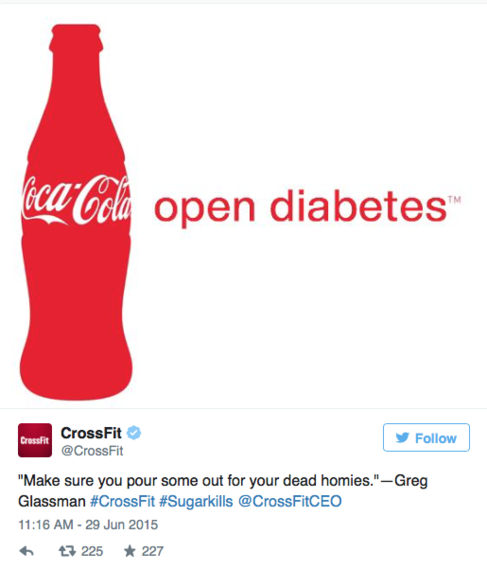 In a tweet Monday CrossFit's CEO Greg Glassman took credit for the above image. It created a backlash on social media. Mostly among people with Type 1 diabetes and parents of Type 1 kids.

Many parents were incensed that Mr. Glassman made it sound like their 2-year-old gave themselves diabetes by drinking too much Coke. Once again Type 1s have been scooped up in the shame-mongering diabetes net.

Many tweeted, "Know the difference between Type 1 and Type 2 diabetes!" Glassman responded that he did and that Type 1s can get Type 2 diabetes too. Which is true if you become overweight and insulin-resistant.

Yet the major fallacy here is that drinking soda causes diabetes. Once again the myth gods have been roused from their slumber. 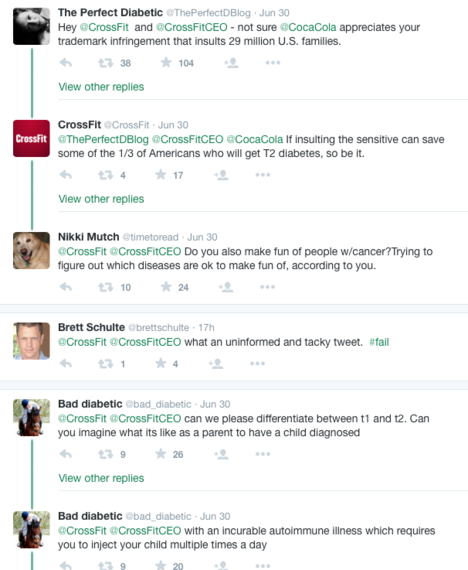 I don't like to see anyone judged for having diabetes or made to feel shame or guilt about it. And as a Type 1 it's so damn tiring to constantly tell people, as wrong as they are, if you mean Type 2 diabetes say Type 2 diabetes.

But as the voice of reason I am also curious. No one seemed to ask Mr. Glassman, "What did you mean to say with this image?" So I reached out to Glassman via Linkedin but got no response from him or CrossFit.

The upset and what diabetes is
So many things about this image riled people. First, it's wrong factually -- you don't get diabetes simply from eating or drinking sugar. Second, it's wrong to shame and blame people. Third, "homies" feels like a racial slur, and that's always wrong.

We may never know Glassman's intent, but I know by reputation he likes to provoke. So since Glassman started this, let's set the record straight, once again.

To make Type 2 diabetes and weight more complex, the jury is out whether being overweight causes insulin resistance (the major characteristic of Type 2 diabetes where you become resistant to the effectiveness of your own insulin) or insulin resistance causes being overweight. Eating too many refined carbohydrates (simple sugary and starchy foods) causes your pancreas to keep pumping out excess insulin. Since insulin is a fat storage hormone too much of it floating in your blood stream can cause weight gain.

To survive, people with Type 1 diabetes must take insulin every day either through an insulin pump or by giving themselves typically four to 10 injections a day. Every day, no vacations. We walk a tightrope 24/7 between life-threatening low blood sugar and complications from high blood sugar over time. As many people also tweeted, Coke can be life-saving if we're having low blood sugar.

Regardless of diabetes, I believe sugar in any quantity is toxic. TuftsNow reported this month that consumption of sugary drinks may lead to an estimated 184,000 adult deaths every year worldwide. Mexico has the highest death rate attributable to sugar-sweetened beverages and the U.S. comes in second. Not something to be proud of. Even more worrying is death attributed to sugary drinks is higher among young adults than older adults.

What we need to do
Sugar doesn't directly cause diabetes, but too much of it is unhealthy. Shocking ads don't motivate people to do better -- they do the opposite. Being clever has its place but not when it comes at the expense of others. And Mr. Glassman, whether you know the difference between Type 1 and Type 2 diabetes, you've taken us all a step back.

Back to the day when Coke's old jingle is now remarkably appropriate in a way I'm sure they never intended. I'd like to teach the world to sing in perfect harmony what's true about diabetes.

Riva's latest book, Diabetes Dos & How-Tos, is available in print and Kindle, along with her other books, 50 Diabetes Myths That Can Ruin Your Life and the 50 Diabetes Truths That Can Save It and The ABCs Of Loving Yourself With Diabetes. Riva speaks to patients and health care providers about flourishing with diabetes. Visit her websites DiabetesStories.com and DiabetesbyDesign.com.