Mrs. Thakur* went to a government hospital with an 8-centimeter cancerous lump in her breast. The doctor she saw told her the cancer was too advanced and sent her home with a prescription of Paracetamol (also known as acetaminophen), saying: "There is nothing more we can do." She was left to die in excruciating pain on the concrete floor of her home.

Her husband found out by chance about a palliative care clinic in the area. He visited the healthcare staff there, saying his wife could not come because she was in too much pain. The doctors gave Mr. Thakur some painkillers from the clinic, and arranged a home visit for the following week. 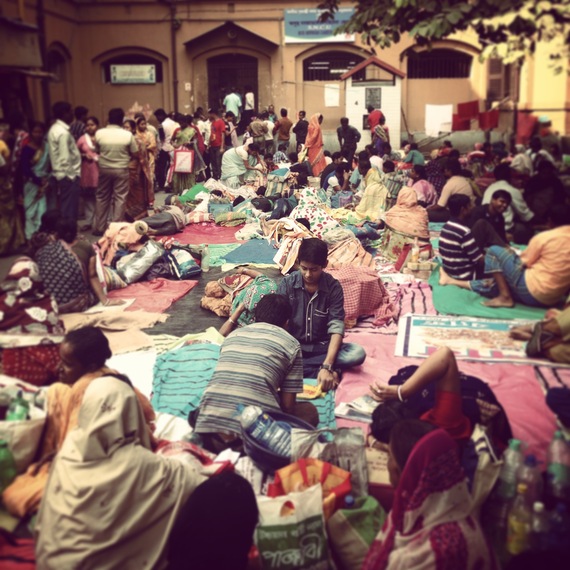 (The organization "Eastern India Palliative Care" has information kiosks at busy government hospitals such as this one in Kolkata to help people access the care they need - photo by Dr. Hannah Fox)

Palliative care is an approach which cares for people, and their families, with life threatening or life limiting illness. Palliative care teams address physical pain and symptoms, as well as offering social, psychological and spiritual assistance.

Mrs. Thakur was only 30 years old, suffering from advanced breast cancer. She was in so much pain that she could not sit up, sleep, eat, or drink. The palliative care doctor gave her an injection of a painkiller, an antiemetic (a drug that is effective against nausea and vomiting), and sedatives, which he uses as a substitute for morphine. 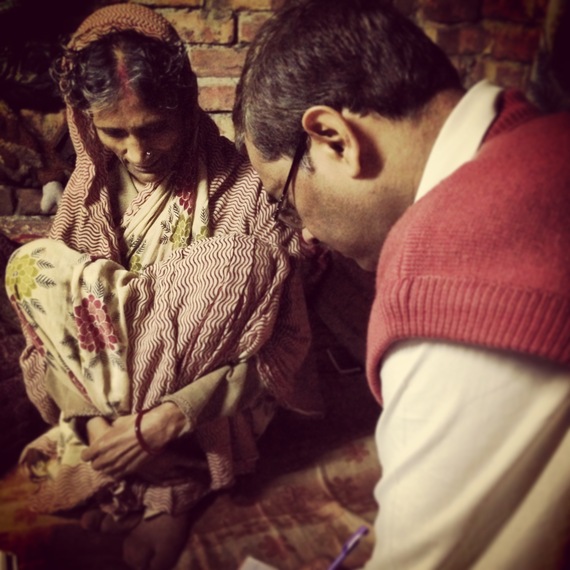 (A family doctor delivering care at home without the necessary medicines available. It is difficult for doctors to control a patients' pain - photo by Dr. Hannah Fox)

In Kolkata, India, where the Thakurs live, and in much of the rest of the world, morphine and other opioid pain medications are very difficult to obtain. This is because of regulatory barriers such as unduly restrictive laws, attitudinal factors such as concerns about addiction and reluctance to prescribe or stock these medicines, or insufficient training for health professionals (See WHO, 2011) .

As a result of these barriers, each year over 18 million people around the world die in agony without access to essential medicines (See WHPCA). Mrs. Thakur's doctor was not able to give her morphine to help relieve her pain, even though this medication is safe, cheap, and effective.

In India, certain major hospitals stock morphine, but often people with diseases such as cancer - sometimes advanced - have to travel many miles to get there, and if a doctor is practicing privately, the licensing is very complicated. Either way, people are left without proper pain management.

In a report released this year, the International Narcotics Control Board (INCB) recognized that approximately 5.5 billion people (see page 13 of International Narcotics Control Board's 2014 Report) still have limited or no access to medicines containing narcotic drugs, such as codeine or morphine, leaving 75% of the world population without access to proper treatment. 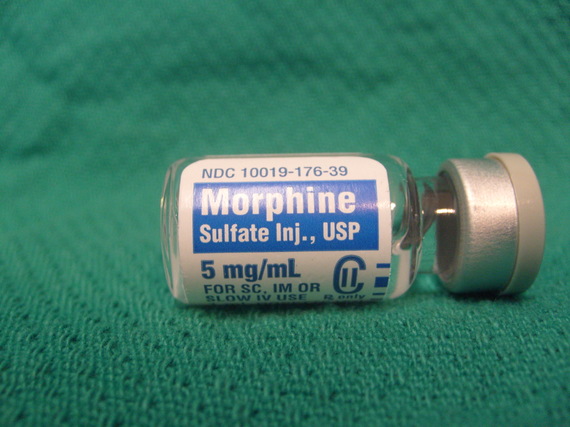 Around 92% of the morphine used worldwide (see page 13 of International Narcotics Control Board's 2014 Report) is consumed in countries in which only 17% of the world population lives - primarily the United States, Canada, Western Europe, Australia, and New Zealand.

Dr Hannah Fox, a visiting British doctor who attended the consultation with Mrs. Thakur, said: "These situations are incredibly sad. Before we arrived, Mrs. Thakur had not taken any pain relief. Seeing that level of suffering is really shocking. The United Kingdom has the National Health Service that is currently free to all and a network of charitable hospices. As a result, you would not see a young woman dying of cancer without any support. Cases such as this illustrate why palliative care and access to morphine are so important."

In April this year, the General Assembly of the United Nations will meet in a Special Session to discuss "the world drug problem." In the past, the issue of access to essential pain-relieving medications such as morphine has been overshadowed by a fervent campaign to stop the trade of illicit drugs through legal action.

The Single Convention on Narcotic Drugs was drawn up and signed by UN member states in 1961. This document calls for both the halting of trade in illicit substances and the need to ensure adequate access to these medicines for medical use. However, in the decades since the adoption of the Single Convention, the need for access to controlled substances for proper medical use has been sidelined as the infamous 'War on Drugs' has led to the creation of national laws and policies which restrict access to all narcotic substances - harmful drugs and helpful medications alike.

Inadequate access to pain-relieving medications contradicts the notion of article 25 of the Universal Declaration of Human Rights, including the right to medical care, which also encompasses palliative care.

Dr. Stephen Connor, Executive Director of the Worldwide Hospice Palliative Care Alliance, said: "We call upon the UN General Assembly to ensure that there is balance between the medical use of controlled substances and prevention of misuse. Lack of access to pain relief is a global crisis." 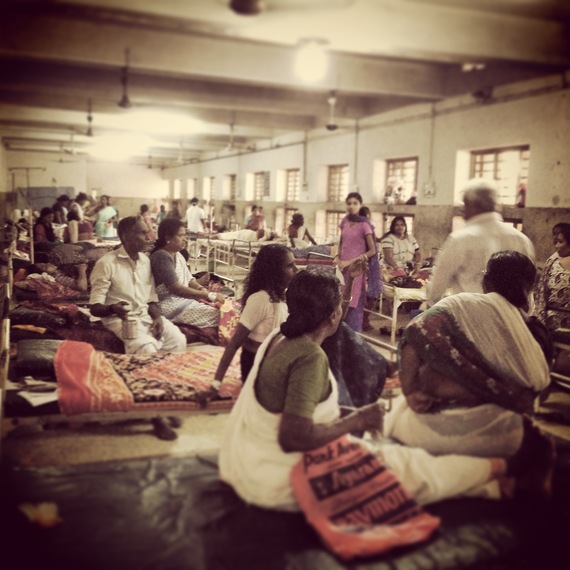 For people like Mrs. Thakur, hope rests on the decisions made and actions taken by the United Nations member states to improve access to essential pain-relieving medications. Health must be a central consideration in the global response to the world drug problem so that people in serious pain can access the medications they need, no matter where in the world they live.