Chris Pine should warm hearts in writer-director Alex Kurtzman's new film People Like Us (three stars out of four). The film, which also stars Elizabeth Banks and Michelle Pfeiffer opens this week. It's one of those rare big-screen outings that manages to effectively pull you into its universe -- and keep pulling you in deeper until you cannot help but care about the people who occupy it. While some critics may claim it's a bit too "Hollywood Cookie Cutter" in the way it was crafted, I warmed up to Kurtzman's writing style and execution. It's one of the most refreshing films of the season. (See also Your Sister's Sister and Safety Not Gauranteed.)

That may have something to do with the bit of serendipity that happened prior to creating the project. (I'm a sucker for serendipity.) The film is based on the director's own real-life experience of discovering that he had a half-sister he never knew about. In reality, it was many years ago, that Kurtzman was struck with a curious idea: what would it be like to find out a) you had a sibling of whom you were never aware, and b) what would would happen if you met that sibling? The very same day Kurtzman had those ideas, he discovered he had a half-sibling.

Some of Kurtzman's real-life, lighthearted magic fuels People. Well that, and Pine, too, which never hurts at the box office. In a recent interview, I asked Pine (and Kurtzman) if serendipity was something they often experience in their lives.

"I am very much a believer that you can manifest things," Pine told me. "And it's not like, 'I want money,' and then money shows up on your doorstep, it's more like... I mean, who knows the science and the chemistry and the explanation for it. But yeah, I definitely believe that if you put it out there into the Universe, in whatever way you think that means -- if it's praying or writing it down, or visualizing or whatever -- that it will come to fruition in some form or another. And if it doesn't, there is a reason why it doesn't, and it will lead you towards precisely that which you need to realize." 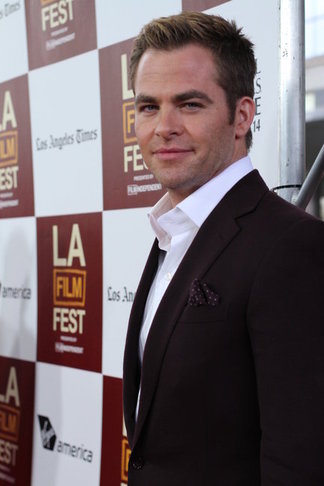 Chris Pine at the recent premiere of People Like Us. Photo: Courtesy of Dreamworks

Read the full Q&A with Pine and director Alex Kurtzman here. Take a peek at the trailer below: