Dog owners look like their dogs. Or so people say.

Take Huffington Post sports columnist Jordan Schultz (below), who says he and his wife, Breanna, are often told they're the spitting image of their pups Lexi and Zepplin. "People always say that," he said. "And I love it, huge compliment for sure." 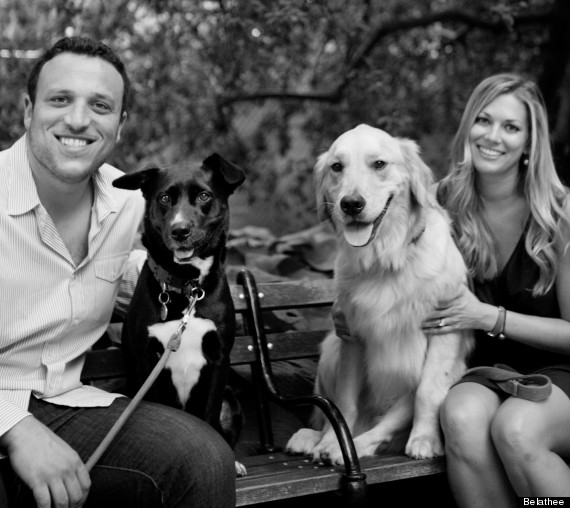 Whether or not you think the Schultzes look like their pets, it seems science is on their side on this one.

Sadahiko Nakajima is a psychologist whose research on dog-owner resemblance has enjoyed a resurgence of interest in recent weeks thanks to coverage in Slate, the U.K.'s Daily Mail and other news outlets. Nakajima, a researcher at Japan's Kwansei Gakuin University, says there's evidence to support not just the notion that humans and their pet dogs look alike, but also why that's so.

It's all in the eyes, he claims.

An experiment Nakajima conducted in 2009 showed that people were, at a rate significantly higher than chance, able to match dogs and their owners simply by looking at photographs of their faces. His findings were similar, he says, to those of previous studies. Taken together, he told The Huffington Post in an email, the evidence from his and other scientists' research shows that the popular belief in dog-owner physical resemblance is empirically valid.

But the question as to why this was the case spurred Nakajima to conduct another experiment -- the results of which were published last year in the journal Anthrozoös -- that sought to determine if the pet-human resemblance could be traced to a specific facial feature.

For the experiment, more than 500 people were shown two sets of photographs. One set showed pictures of real dog-owner pairs, while the other set had random pairings of people and dogs. The participants were randomly assigned to one of five different “masking” photo conditions, pictured below: no-mask (in which the human's and the dog's faces were unobstructed), eye-mask (the human's eyes were blacked out), mouth-mask (the human's mouth was blacked out), dog-eye-mask (the dog's eyes were blacked out), and eye-only (where just the eyes of the human and the dog could be seen).

The participants were then asked to select the dog-owner pairs that physically resembled each other. 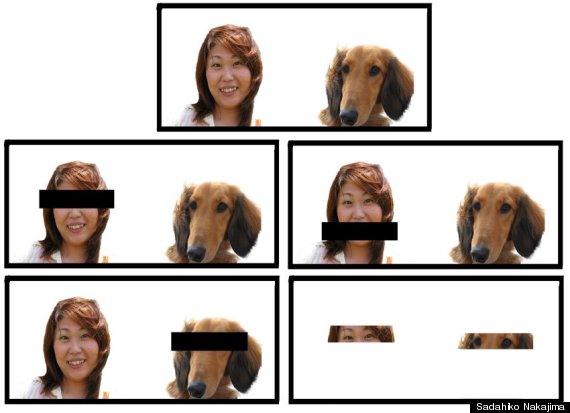 The results of the experiment were fascinating.

As in Nakajima's 2009 experiment, participants who were shown the unobstructed photos correctly identified the dog-owner pairs most of the time. (In this case, their accuracy rate was up to 80 percent.) When the owners' mouths were concealed, participants were correct 73 percent of the time.

When participants were shown only the eyes of the dog and the human, their accuracy rose to 74 percent.

It seems the eyes really do have it!

The results "clearly show that individuals make decisions on dog-owner resemblance primarily by comparing features of the eye region between dogs and owners," Nakajima concluded in his paper.

But why do people wind up looking like their dogs? Nakajima told HuffPost that "a major reason of the dog-owner facial resemblance is the so-called 'mere exposure effect,'" or the idea that a person might choose to get a dog who looks similar to themselves because of a preference for the familiar.

By submitting your image, you are agreeing to The Huffington Post's TOS: bit.ly/HuffPostTOS
Go To Homepage

HuffPost Editors With Their Pets