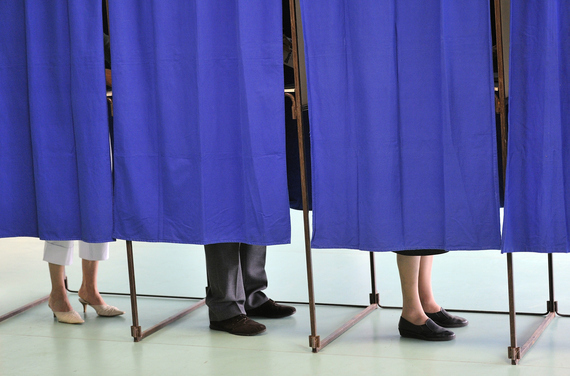 I swore to myself that I would resist the temptation.

I fought the pull and the desire.

But I can no longer resist...

How can I NOT comment on the U.S. presidential primaries!

Having just completed an around-the-world tour, I can report with accuracy and honesty that wherever I went, wherever I go, the topic of the U.S. elections raises its sometimes ugly, sometimes comic, sometimes tragic head as people, everywhere, perceive it as affecting them in one way or another.

And certainly the proliferation of channels and the exponential amplification effect of all the flowing 24/7 content makes it all seem up close and personal -- no matter where you are in the world.

But, lest I lead you on with false hopes of controversial political statements and nonpolitically correct commentary, full and open confession, I will not be opining about individual candidates or parties and my own personal preferences and choices...despite the fact that it is hard for me not to, particularly after this last weekend...

Rather, I ask you to guess my preferences and probable vote...as it seems that is about all the pollsters can do -- despite the countless amounts of data that is available for their analysis...and therein lies my Ramble this week...with what I believe are important and critical questions all of us should be asking about some of the basic business assumptions around data we are being saddled with as truths.

RED-FACED is the operative word in describing the state of political polling in the world today...and I say the world because the trend is clearly global:

Seems to me that the question that needs to be asked is obvious and clear -- in a world where we value companies at ridiculous amounts precisely because of the belief that they can predict the color of the shirt you are going to buy, and we arrive at that conclusion by the application of ever-evolving algorithms that crunch a never-ending and growing stream of data, how could I not be able to predict your vote?

Think about it -- the impulsiveness, the history and the preferences that go into the purchase of a shirt, for example, in a particular color and style seems to be far more complex than the simple are you voting for A or B when I know your affiliation and who you voted for before.

So what in the name of "who is going to win" is going on here?

Let me return the focus to North America and the US presidential primaries.

One issue seems to be the bucketing of people by assumed persona:

But one of the fundamental aspects of Trump's campaign -- which has confounded political pundits to no end -- has been his ability to find support across seemingly contradictory pockets of the American electorate. Since the start of this election, commentators have been obsessed with assigning each candidate to specific groups of voters based on their demographics, backgrounds and ideologies; Ted Cruz's base was supposed to be evangelical Christians concentrated in the south, while Jeb Bush and Marco Rubio were the "establishment" guys that would appeal to moderates in northeastern suburbs. But Trump smashed through this framework by proving he was able to pick up supporters across all kinds of voters. - VICE

Read it again and imagine they are reporting on targeting you for a travel offer or a new car or that shirt I keep obsessing over (frankly because one that I will never buy seems to be following me all over...you know what I mean)...we claim we know:

Ted Cruz's presidential campaign has ramped up its aggressive voter-targeting operation, paying out more than $3m to a company that is using detailed psychological profiles to sway voters. -- The Guardian

Guess that money went to waste...but some spending seemed to work.

VICE reports on "How Bernie Sanders Pulled Off a Huge Upset in Michigan and What It Means":

Polls from earlier this week showed [Hillary Clinton] with double-digit leads, some as high as 27 points, and yet she lost to Sanders on Tuesday, 50-48 percent.

How did everyone get it so wrong?

The Sanders campaign invested heavily in Michigan, counting on a victory or close race there to prove that he could win big and diverse states. He outspent the Clinton campaign in Michigan in the last week before the primary but the polls barely budged. Even Sanders didn't think he would win Michigan....

Generally speaking, much of Michigan's polling leaves out cell phone users and thus huge numbers of young voters, who disproportionately back Sanders, and some minorities. Many of those pollsters used voters' history of participating in the Democratic primaries to determine how likely they were to turn out. But [Michigan State University's Matt] Grossman pointed out in an interview with VICE News on Tuesday [March 9th] that Michigan hasn't had a competitive Democratic presidential race in a while. In 2012, President Obama ran unopposed and in 2008, he failed to get on the ballot there. "So it was really hard to figure out who was going to vote," Grossman said.

So Bernie spent locally...and had any of the pollsters used insight instead of algorithm, my sense is there would have been fewer red faces...

The cell phone issue mentioned above is critical and raises many questions across many more areas than just politics:

Listen to this from NPR, "What You Need to Know About Early Polls and How to Read Them":

Polling, in general, is getting worse...Cellphones have made nearly everyone's lives easier - everyone except pollsters, that is. They can call your landline (if you have one) on an automatic dialer, but they have to dial your cellphone by hand. (In other words, and in polling terms - only "live caller" surveys are legally allowed to call cellphones.)

Given the fast-growing number of cellphone-only homes (and the demography of who uses them - younger voters), that makes accurate polling a much more labor-intensive and expensive process, as calling a representative sample of landlines just takes that much more work.

Now add people, a second issue to the cellphone issue:

What's more, response rates -- how many people agree to be polled -- is way down from 30 years ago. All of that has made polls -- early or not -- less accurate with every successive election in recent years, Zukin points out.

Here's a similar argument from The New York Times:

Two trends are driving the increasing unreliability of election and other polling in the United States: the growth of cellphones and the decline in people willing to answer surveys. Coupled, they have made high-quality research much more expensive to do, so there is less of it. This has opened the door for less scientifically based, less well-tested techniques. To top it off, a perennial election polling problem, how to identify "likely voters," has become even thornier.

The obvious question is what about the Internet? We hear so much about the accuracy of "targeting and predictive analytics."

The NPR article mentioned above admits that the Internet does not yet solve the problem:

The biggest question in polling right now is what to do about it. Online polls are the future, Zukin adds, but, for now, they're just not that good of an option. They tend to be less reliable than phone polls, because they can't get a random sample -- the people who take them are a self-selecting group.

And The New York Times piece shares a similar concern:

The new economics have driven many election pollsters to the Internet, where expenses are a fraction of what it costs to do a good telephone sample. However, there are major problems with Internet polls. First is what pollsters call "coverage error." Not everybody is reachable online; Pew estimates that 87 percent of American adults are Internet users. A much bigger issue is that we simply have not yet figured out how to draw a representative sample of Internet users.

HMMMMMM, I wonder if any of the Digibabblists have paid attention? Frankly, if anyone were really paying attention, I'd bet some wild valuations of certain companies would certainly drop... N'est-ce pas?

Meanwhile USA Today sees the issue as human based -- serendipity as I call it:

This is an extremely volatile political climate, driven by an angry electorate whose voting preferences are difficult to gauge;
Pollsters low-balled turnout among evangelical voters and underestimated Cruz's get-out-the-vote operation;
The Iowa caucuses are uniquely tough to predict, with a quirky process and lots of last-minute deciders.

And of course there is always just plain old survival.

Referring to the 2006 Hamas elections,

Palestinian pollsters were at a loss to explain the discrepancy between the exit polls. Many voters said they had been afraid to admit to pollsters they had supported Hamas, fearing retribution.

And there you have it -- a combination of technology limitations and human quirkiness that in my opinion all add up to the notion that we are a hard group to predict, which of course immediately raises the issue of that damned shirt...

All in all, I believe the message is PEOPLE FIRST -- a soapbox I will never get off -- but one that every day seems to be getting bigger -- understand the audience -- look for insight, not just big data trends -- learn from the past by studying it - appreciate our serendipity and recognize that there are many factors at work here, and in the quiet private of the voters booth, the truth will win out.

And I'd argue strongly that the issue is not limited to the election -- el contraire -- this is a serious business issue that effects all marketers -- all brands -- and frankly all of us..

Perhaps it's no simpler than this...listen:

People never lie so much as before an election, during a war, or after a hunt. Otto von Bismarck

Limitations, serendipity, survival...the human condition...four factors that make us who and what we are...and for that I am thankful.