Yea, I know, Spring should mean that a young man's fancy turns to thoughts of love and other romantic conceits, but here at the Peninsula Humane Society & SPCA we know its Spring when the first nestling hummingbirds show up -- soon to be followed, if this year follows pattern, by baby squirrels and then the months of newborn kittens without their moms. Spring, for us, is a very busy time of year. 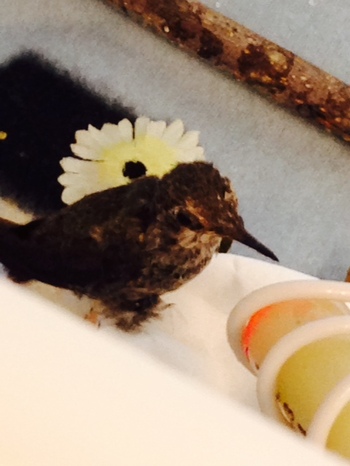 PHS/SPCA is the caregiver for orphaned and injured native wildlife from San Francisco, San Mateo and the northern half of Santa Clara counties. And the first Anna's Hummingbirds are now in.

Amazing birds, really, hummingbirds are not the passive, brightly colored little flashes of color we make of them. They are tenacious and pugnacious little creatures, which is a very good thing for the orphaned babies we try and nurse along until they're old enough and strong enough to return them to the wild. (Several Pueblo peoples of the American southwest, a part of the world with a large and varied population of hummers, liken these birds' behaviors to that of warriors.)

The little fellow in this photo is one of two currently in one of our incubators. He's well on his way, perching on a twig and feeding on his own, but others come to us much younger, much less independent, still caught in their nests. Let me explain that use of "caught" in this context.

Baby hummingbirds' toes instinctively wrap into the fabric of their nests upon hatching. They are in fact so tightly caught that if the nest (about the size of your thumb, usually with two hatchlings) gets blown off by a storm or a tree-trimmer, those babies stay in place even as it tumbles down to the ground away from the tree. As a general rule they do not fall out of their nests; rather, they fall with their nests.

As the babies grow, fed by both parents, their growing bodies stretch the fabric of the nest's material. Eventually, when they are ready to fly, they have stretched the nesting material to such a point that it is now more like a loose net than a dense fabric, allowing their toes to free up as they lift into the air. It's a remarkable adaptation for a remarkable animal.

In our care, of course, volunteers replace those parents. Volunteers tuned into kitchen timers respond to alarms, first every 15 minutes and eventually longer durations as the babies mature, bringing a yummy blend of insect slurry and nectar to feed the babies out of the ends of syringes. And they must do so pretty much from dawn to dusk.

Last year, PHS/SPCA made well and then returned to the natural habitat 1,311 hummingbirds, squirrels, goldfinches, robins, raccoons, opossums, red-tail hawks, screech owls, turkey vultures and other native wild animals. Want to be part of that? Go to our website (www.PHS-SPCA.org) and check out volunteer opportunities.