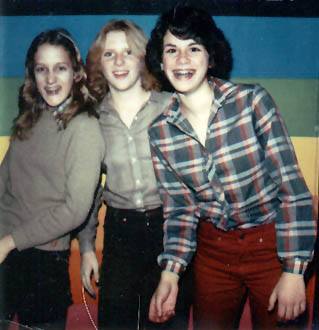 Sitting in my friend Megan's wood-paneled den watching "General Hospital" with my 12-year-old pals in the late 70s, a spontaneous poll broke out. Via anonymous crumpled pieces of notebook paper, Pam was voted the prettiest, Patty the funniest, Kate the best athlete, Stacey the smartest, Megan the toughest, Tina the best hair, and I won "the nicest."

It felt like a slap across my tin-filled mouth. That was the exact opposite of how and who I wanted to be. I felt weak, invisible, too nice to matter. The jig was up. Others knew my secret -- I was a pleaser, not a fighter.

I wanted Megan's votes -- the ability not to feel and notice everything so intensely, not to care what other people thought about every minutia of you, to accept without hesitation when another girl "called you out" for an after-school fight on the hill. That was freedom, and as alien to me as Tina's soft blonde, perfectly feathered hair.

Around that time I remember my mom saying that I treated my friends better than my family. Immediately, I knew it was true. My family was stuck with me, warts and all, or so I thought back then.

I wish I could say that with those early realizations came change, but that'd be a big, fat one. Fast forward 36 years from middle school to last night. My husband said he feels like he and our kids get the scraps of what's left over after I've given the best of myself to clients, co-workers, friends and strangers. Being thoughtful and kind takes energy, and my tank of nice is typically spent by the end of the day.

Case in point -- yesterday I picked up my seven-year-old at a friend's house across town at 5 p.m. when I knew my husband needed to get him somewhere by 6. I'd agreed to the date and time last week when I knew the timing would be tight. In my effort to please my son's friend's mom and my son, I'd set up an arrangement that'd add more stress to our family's already rushed evening time.

When I arrived to retrieve my son promptly at 5 p.m., he was in the midst of a critical part of his starburst Rainbow Loom bracelet and in no rush to leave. His friend's mom was warm and fun. She popped open a bottle of red wine, and guess what? I had a glass. I never fully enjoyed the wine because I knew that my husband would be incredibly ticked off when my son and I arrived home late and unfed. Yet I drank, and he loomed.

What's at the core of this strong compulsion to be liked? If I truly knew, I'd vow to care less.

This morning, I read a news report about 12-year-old Rebecca Sedwick who threw herself off a tower at a concrete plant in Lakeland, Florida last month after months of extreme cyber bullying. Her mother home-schooled Rebecca rather than send her to school alongside her 12- and 14-year old tormentors, but still allowed her to use her cell phone. "I just didn't want to have her not like me....," her mom said.

And that's likely how the 12-year-old bully felt about the older girl leading the charge against Rebecca. So strong was her need to be liked by this 14-year-old alpha dog that she beat up her former best friend simply because this broken but ultra-tough girl told her to.

Adolescence and its seeming unending cycle of pain makes things appear more vividly in my mind. I think back to that time and know that if we'd had cell phones and social media instead of Pac Man and General Hospital, there would have been bullies and the bullied. And it would have been brutal.

I would have been bullied.

But I have the luxury of guessing, which is something today's eager-to-fit-in pre-teens don't. If someone with power in their social circle posts something mean about them, they feel as though their world is crashing in. And others can be compelled to go against their nature and hurt former friends or do nothing rather than risk being cast out of what seems like the most important group that will ever be.

Are we so earth shatteringly afraid of others' judgment and looking at the dark places within that we neglect ourselves and those that care about us?

That desire to fit in may begin in adolescence and continue on for decades, but we can chose to end it whenever we want. I'm starting now.