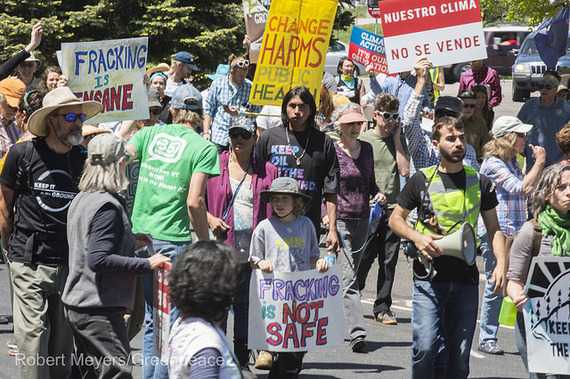 A Holiday Inn is not your typical front line in the battle against climate change.

But last week, that's where we both were, in Lakewood, Colorado. As the executive director of an organization campaigning for climate justice, and a founding member of groups battling fracking across this state, we joined hundreds of community activists in nonviolent direct action. The normally quiet hotel erupted into a storm of protest with over 100 people risking arrest because this is where the federal government chose to hold an auction for fossil fuel leases - exploiting more public lands for more climate chaos.

There were so many of us because people are fed up. Last week was an escalation of the people's movement to keep fossil fuels in the ground. It was a protest against the onslaught of fracking wells popping up across Colorado -- some near schools, playgrounds, and hospitals -- and the accompanying erosion of democracy. And it was an act of solidarity with Break Free protests around the world, where tens of thousands of people engaged in the largest coordinated resistance to the fossil fuel industry yet.

As the world's nations hammer out an agreement to stabilize the climate, American corporations continue to receive leases to public lands for pennies on the dollar to drill, mine and frack. These leases are long-term chains, locking our nation into a dirty deal with carbon that will drag us well past climate stability. The companies that hold these leases include multi-billion dollar corporations that have amassed vast wealth gaming this system for well over a century. The auction itself is an antiquated Wild West style fire sale, that evolved in the early 1900's, when the country was hungry for cheap, subsidized energy to fuel manufacturing. Though we knew fossil fuels were dirty even then, there was little understanding of how carbon would wreak havoc with our climate.

But today, we know better. Extracting, burning and transporting fossil fuels all carry significant risks to our health, the climate and to neighboring communities. And yet, the auctions have continued unabated -- until now. In the past few months, people have been showing up to these auctions to say no more, using the phrase Keep it in the Ground to underscore the wisdom and foresight needed to pivot to clean energy. More and more, this movement has succeeded in delaying or canceling auctions over the last few months. But we urgently need this process to end once and for all. 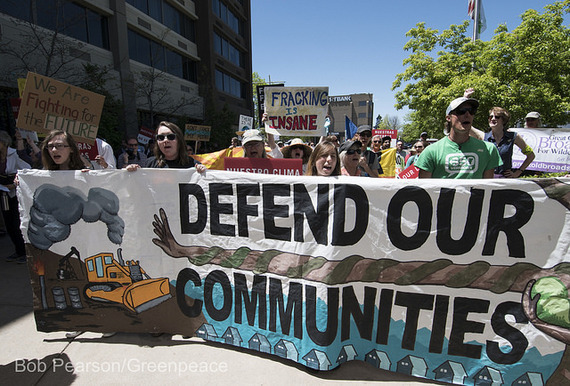 In Colorado, it's become clear that the wisdom to keep fossil fuels in the ground will be fought at every turn by industry. There is now a systematic dissolution of people's rights and the democratic process. In recent years Colorado has seen fights in six cities where ordinary citizens, mothers, teachers, nurses have been organizing their municipalities to reject the harmful practice of fracking. But these people-powered efforts have met steady opposition by well-funded industry front-groups, at times being outspent to the tune of 500 to 1 in an effort to sway the electoral process in favor of wealthy corporate interests. Yet most of the time, in these showdowns, the people have won.

Industry front-groups regrouped to challenge the right of local communities to stop fracking and drilling in court. Last week, the Colorado Supreme Court, another instrument of the fossil fuel status quo, ruled that local communities do not have authority to ban these dangerous activities. By overturning these local initiatives, the court has effectively said that the rights guaranteed to Coloradans, to defend their lives, to protect their property, to seek safety and happiness, are only inalienable when they don't cut into the profits of fossil fuel companies.

The level of greed in Colorado is now at a fever pitch, where a cozy network of CEO's shower politicians with donations, hire consultants to run counter-campaigns against citizen efforts, and flood TV channels with polished advertisements to turn the tide of public opinion. This influence has become so outsized as to sway the Colorado legislature to handicap the one process that people in Colorado have to bypass state government to make laws themselves: the ballot initiative. Not satisfied with just the legal ruling, corporations are tampering with this process, including new requirements that only wealthy interests could afford to meet. And thus another tool of democracy slips away from the people.

This leaves few avenues for ordinary citizens to engage in decisions affecting their safety, their air, water, and the climate. From preservation of public lands to defending their communities against dirty energy, people around the world are engaging in peaceful direct action to show that our lives are more important than profit.

Last week in Colorado was a pivotal moment where people stepped up to show how the fossil fuel auction process is failing the U.S. people, and to tell President Obama to intervene. Just days ago, at the Salt Lake City Library, community and climate activists interrupted yet another auction. Some staged a sit-in and were forcibly removed by police. Others sang over the auctioneer in two-part harmony, "People gonna rise like the water, we're gonna calm this crisis down." On the same day, it was revealed that Big Oil wants to exclude the public from public land auctions by pushing them online, eBay-style. Regardless of political rigging to benefit corporations, now or in the future, the will and the power of the people cannot be ignored.