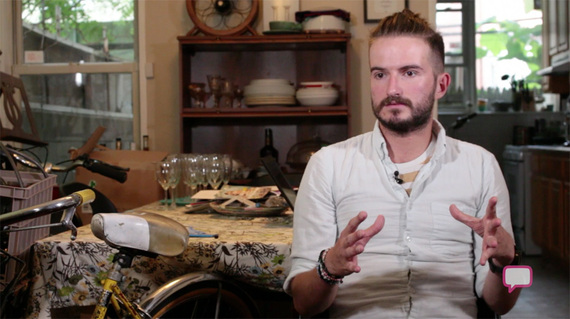 Like many people, Alexander Kacala started drinking in early adulthood. He drank when he went to the bars and used it as a social lubricant. It wasn't until people started commenting on his behavior while drinking that he realized he might have a problem. Alexander recalls:

And soon I really started getting in these ridiculous arguments and fights with people and people started referring to me as a monster, they would say to me, "Wow, I've never seen anyone do that and it was scary and the type of person you became was a monster."

After a long night out of drinking, Alexander decided to drive himself home. After falling asleep while driving, he ended up crashing into parked cars. The accident resulted not only in a trip to the hospital, but to jail, where he met a cellmate who became an unexpected source of sage advice:

And in that moment he was so inspirational and he really cared for me. And I don't even know who he was and I never will. But he was like, and it really makes me upset when I talk about it, but in that moment he said to me, "Oh, man, you are meant to be here. God cradled you in his arms last night and you are meant to be here for some reason. I don't really know why, but if i were you I wouldn't ever drink another drop of alcohol ever again."

But even that didn't convince Alexander to stop drinking. Finally growing tired of the endless cycle of drinking, making mistakes, resolving them, and repeating the process all over again, Alexander had a moment of clarity and wanted to stop once and for all. Realizing he might not be able to do it alone, he shared his decision on Facebook:

And once I put it out there like that, I can't go back to the bar the next week and have a drink. I woke up the next day, I fell asleep that night on the couch, and I looked at my phone and there were all these "likes" and comments and people commenting who didn't even know Adult Alex, who didn't even know about my drinking problem, people from elementary school, congratulating me and wishing me "good luck", and so that was really scary in that moment because I was really exposing myself to those people, but that day was October 15, 2013.