One of the first things we noticed when we moved from the U.S. 12 years ago was the vast difference in construction materials and methods in Latin American countries. 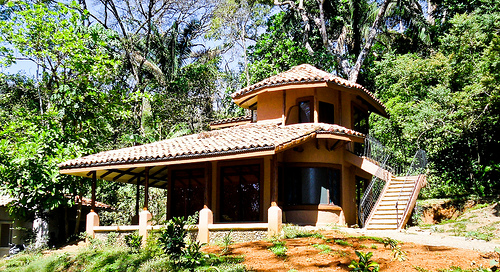 Back home, we'd been born and raised in houses made of wood or wood and brick with interior finishes of wood, drywall, plaster, and/or wallpaper over walls stuffed with insulation.

But ever since we've moved to Latin America, we've lived in a series of concrete boxes.

Some of these boxes have been incredibly ornate... you can make just about any shape you want out of concrete if you're good at it, and Latin American architects and builders are very good at working with concrete. Indeed, some of the architectural designs we've seen during our travels have made us think that just because you can do something doesn't mean you should. For example, just because you can create a house that looks like a cross between the Taj Mahal and the Kremlin doesn't mean you should.

But for the most part, the places we've lived have essentially been very comfortable and very sturdy homes made of concrete blocks stacked on concrete floors between rebar-reinforced concrete towers holding up concrete ceilings.

Plaster the inside and outside of the box, and you're done.

Well, that's except for the plumbing and electricity. In most of the new construction we've seen, after the basic structure is built, workers go in and chop out channels for the pipes and wires. The plumbing and wires are set in the channels, and everything is plastered over again.

It's one of the things expats marvel at... it seems like either extreme lack of planning or lots of extra work to do things this way. But it's one of the reasons you can change your mind about a building project at almost any time with one of these structures.

Change your mind about where the sink is? Chop it out and move it over 18 inches. Don't like the view from the bathroom window? Fill it in and chop out another one where you want it.

No one gets upset. No one complains. No one says, "Man, it took me three days to stack and plaster that wall there, and now you want it WHERE?!?"

The guys with the hammers and chisels just show up and change it. Work is work, and concrete is concrete.

We love that about Latin American construction and construction workers. We also love the fact that almost every concrete box we've lived in has been hurricane- and earthquake-proof. A properly built concrete house with properly placed and poured rebar-reinforced towers and roof is kind of like living in a blast-proof bunker. Add lots of windows, and you have a bunker with a view. Then paint it any color or design you want, fill it with your favorite tiles and flooring, and you have a bright, colorful, sun-filled bunker with a view.

It's actually a good feeling, and we've gotten used to it. We've also gotten used to the price of this kind of construction, which in many places in Latin America is still well below $100 per square foot, all in... materials, labor, finishes, and basic fixtures.

And every time we visit friends back in the U.S. we wonder why cheap, sturdy concrete construction isn't the standard... especially in places prone to things like tornadoes and hurricanes where people still live in house that are essentially made of sticks.

We know one reason, of course... concrete houses are hard to heat. A few days of the sub-zero temperatures of a typical Midwestern winter and a concrete house is just a large icebox. Concrete houses work best in places where the weather never gets too cold, which is another reason we like them so much... they're most common in places with great weather, which is where we want to live anyway.

And when you want to change them or expand them? Again, just call the guys with the hammers and chisels. Like we're doing now to our home in Ecuador.

But that's another story.