Two years ago, I asked Arthur Delaney, one of our gifted young reporters at The Huffington Post, to focus his coverage on one thing: putting flesh and blood on the data of our economic crisis, and bringing to our readers the real stories of the unemployed, of those facing foreclosure, of the "formerly middle class."

It was 2009, and the decline of the middle class was a subject I had become obsessed with, both in my own writing and in HuffPost's coverage of the economic crisis. From foreclosures to unemployment to household debt to bankruptcies, it was clear the American middle class -- the foundation of our democracy -- was under assault from all sides. And it was equally clear that we in the media were not doing nearly enough to spotlight the real-life day-to-day impact this was having on people's lives.

Arthur embraced his mission with a powerful combination of passion, empathy, and a healthy dose of anger. His poignant reporting has now been collected in A People's History of the Great Recession, an e-book that is being published today, in the shadow of Labor Day and in the wake of the worst jobs report in 11 months.

When Arthur first began looking at the struggles of those affected by the economic crisis, we considered calling him our "Economic Suffering Correspondent," but that seemed too dreary (though by no means inaccurate). So instead we called him our "Economic Impact Correspondent." His job was to find families and individuals dealing with the consequences of the economic devastation and tell their stories in ways that captured the public imagination and touched people's hearts.

"People work for justice when their hearts are stirred by specific lives and situations that develop our capacity to feel empathy, to imagine ourselves as someone else," says Paul Loeb, author of Soul of a Citizen. "New information -- the percentage of people out of work or children in poverty, the numbers behind America's record health-care costs, the annual increases in greenhouse gases -- can help us comprehend the magnitude of our shared problems and develop appropriate responses. But information alone can't provide the organic connection that binds one person to another, or that stirs our hearts to act. Powerful stories can break us beyond our isolated worlds."

And it was both our readers and those whose stories Arthur was telling day in and day out who were moved by his work. I remember arriving at Citi Field in Queens at 5 in the morning to greet the people arriving to board the 200 buses HuffPost had provided to get people to Washington for Jon Stewart's Rally to Restore Sanity. One of the buses was to be filled with 99ers -- those who had been unemployed for over 99 weeks (the point at which all unemployment benefits end). Dozens of them reached out to me to ask, "Where is Arthur?" Arthur had become part of their lives, not just an arms-length reporter, but someone who used his compassion, his empathy, and his considerable talents to make a difference in their lives by ensuring that their plights were known and their voices heard.

It was this same caring and dedication, sometimes tinged with outrage, that Arthur brought to his encounters with those entrusted with making public policy. I remember one morning in Nancy Pelosi's office when she was still the Speaker. She was meeting with a number of reporters from our DC bureau, and was describing her legislative plan. When she finished, Arthur cried out: "So what can we tell the unemployed? I get emails every hour, 'What's going on?'"

It's all too easy for far too many reporters to ignore the fact that what goes on in Washington is about more than political theater. But not for Arthur.

The gulf between the real concerns of the public and the circus that's been going on in Washington has seldom been so great. For Arthur, however, there's an irrefutable and palpable connection between policy and the day-to-day impact it has all across America. If all those in the media had Arthur's passion, and his talent for bringing these stories to life, our leaders would, in the memorable words of Richard Clarke, be running around with their hair on fire.

I hope that Arthur's A People's History of the Great Recession will help bring that much-needed sense of urgency to the public debate and our leaders' priorities.

If it's true we can do "whatever we set our mind to," as the president said upon announcing the killing of Osama bin Laden, then how about we set our mind to reigniting the American Dream for everybody, and not just those few for whom the recession is an out-of-sight-out-of-mind problem of the past? There is no more important thing we can do as a country right now. One place to start is with ourselves. Our politicians have chosen to narrow their imaginations, but they can't narrow ours. 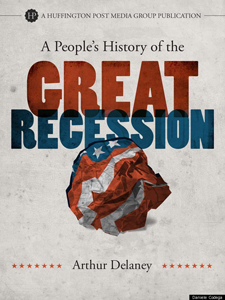 There is no question that the media also have a responsibility here, and I include everyone in the media -- mainstream, new media, all of us. Because bearing witness is ultimately the highest calling for journalists and indeed for all citizens -- especially at a time of multiple crises and so much struggle in the lives of millions.

So as Washington disconnects, the rest of us need -- more than ever -- to connect. In times of crisis and disruptive change, empathy is the most valuable quality we can nurture if we're going to reclaim our destinies -- and our nation's. Arthur's book is a testament to the power of bearing witness.

You can get A People's History of the Great Recession, which was created and distributed using BookBrewer, at Amazon, iTunes, Barnes & Noble, and Kobo.