Thursday, July 28, when Hillary Rodham Clinton took to the stage to accept the Democratic nomination to be the first female candidate of a major political party for president, was also the 101st anniversary of the U.S. military occupation of Haiti that lasted nineteen years.

Hundreds of people took to the streets and filled a gym named after president Stenio Vincent, who negotiated the departure of the U.S. Marines in 1934, to launch the People's Tribunal on U.S. Occupation/Domination. The march began at Fort National, of historic significance. Equally significant was the rapprochement of various segments of Haiti's progressive movements, often fragmented along political lines. 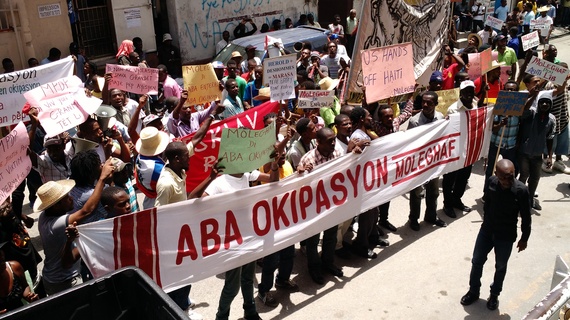 As the U.S. is gearing towards what will almost certainly be an expensive, combative, and highly charged general election, Haitian authorities have rescheduled elections for October 9. While some praised interim President Jocelerme Privert for declaring financial independence from the U.S., vowing to hold the elections without U.S. funding, this assertion of sovereignty was eroded as much of the $55 million budgeted for the elections will go to foreign firms to print the ballots. Privert's tightening of the state's belts has asphyxiated the already fragile public sector, notably education and health care. The State University of Haiti is in a prolonged crisis deepened Friday by the arrests of protestors occupying the administrative building, and doctors at the State Hospital have been on strike for months.

These contemporary struggles underscore the stakes in the efforts to re-unify the Haitian left. And they also underscore the need for a historical analysis and reparations. Without naming them all, here are six contemporary legacies of the first 1915-1934 U.S. Occupation:

1.Creating a new constitution that gave foreigners the rights to land in Haiti. Today, land rights - intimately linked with food sovereignty - remains one of the biggest struggles. International projects - free trade zones, export-oriented agriculture like Agritrans, high-end tourist development such as that at Île-à-Vache, or mining - threatens this right.
2.Creating an army - which had devastating consequences of human rights violations and massacres, not to mention setting the stage for the Duvalier dictatorship.
3.Appropriating wealth - the U.S. stole $500,000 in gold reserves on December 17, 1914, right before the Occupation. During the occupation, National City Bank took control of Haiti's central bank. Since this time, Haiti's financial management remains under international agencies' rule.
4.Centralizing political and economic power in Port-au-Prince. Regional economies were undermined as nearly all wealth and all industries were developed in the capital. Political power was also centralized. These factors contributed to the hyperurbanization, and certainly after the killing of the Haitian pig population in the early 1980s. The 2010 earthquake exposed the consequences of this centralization in the "Republic of Port-au-Prince."
5.Fanning the conflict with other neighboring countries, certainly the Dominican Republic - it is not coincidence that the Dominican state chose the date of 1929, wherein if someone was born after this date their citizenship status was revoked in 2013. The U.S. occupied both sides of the island for several years, triggering a migration of Haitian laborers to cut Dominican sugar cane. Since June 18 of last year - where tens of thousands were either expelled or left 'voluntary' fearing mob violence - this situation has become a crisis and massive human rights violation.
6.Submitting the country under international agencies' tutelage - many in Haiti argue that the Occupation that began 101 years ago has never stopped. The 1915 military occupation prepared the ground for foreign control of development and fiscal policies. Haitian sovereignty has been eroded ever since. The debt claimed by international agencies was the opening for what used to be called "Structural Adjustment" programs, where international agencies forced the country to be open to foreign products, especially U.S. rice. In effect, Haiti was turned into a dumping ground for the U.S. and neighboring countries. In addition to this direct control, the 1915 Occupation prepared the country for what Sauveur Pierre Etienne called an "invasion of NGOs." After the earthquake Haiti was often called a "republic of NGOs" undermining state capacity and authority. This "humanitarian occupation" is accompanied by a U.N. invasion. These troops, who have brought cholera to the country with several documented cases of rape and sexual assault, have immunity.

The march, several hundred people strong, gained strength as it wound its way through low-income neighborhoods where several onlookers, handed a cartoon 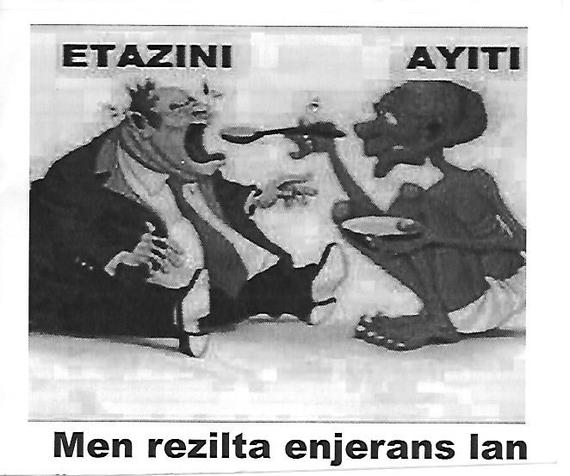 depicting an emaciated Haitian man feeding an already bloated Uncle Sam, joined. David Oxygène, of MOLEGHAF, spoke to the press across from the site of the demolished National Palace and barracks.

These may seem like lofty goals, raising questions of why now? And why would this be a priority given so many other urgent realities in the country, and indeed the region and world.

In his presentation at the launch of the People's Tribunal, Camille Chalmers pointed out the historical amnesia, as a result of the lack of investment in education. "When people hear about this process, they are thirsty for more information." Chalmers recounted the impact of the 1967-1968 International War Crimes Tribunal, organized in by philosophers Bertrand Russell and Jean-Paul Sartre, which turned the tide of public opinion, mobilizing support for the eventual U.S. withdrawal.

Specifically answering why now, history professor Jean Eddy Lucien pointed out the continuities and historical roots of many contemporary social problems in Haiti. In addition to several noted above, Lucien pointed out the roots of poverty and Haiti's role as provider of cheap labor that began with the U.S. Marines occupation. Lucien noted how 82% of Haitian college educated professionals live outside the country, a result of these processes of migration and underdevelopment.

MPDP coordinator Ernst Mathurin unveiled the list of the committee to investigate and bring forth the lawsuit, as well as the jury, available on the People's Tribunal Facebook page. Both teams include leaders of public opinion, seasoned NGO professionals, social movement participants, and university professors. Music of many styles and poetry also spoke to the importance of this encounter with history.

The People's Tribunal is moving ahead: the investigative committee is gathering facts to prepare its case. And it's already begun building bridges.

Especially in this volatile electoral season - in Haiti as in the U.S. - it is easy to lose sight of history and structural causes of today's social ills. The People's Tribunal allows for an imagination and articulation of solutions.