We've seen plenty of advertising fails. But this one is truly perplexing. 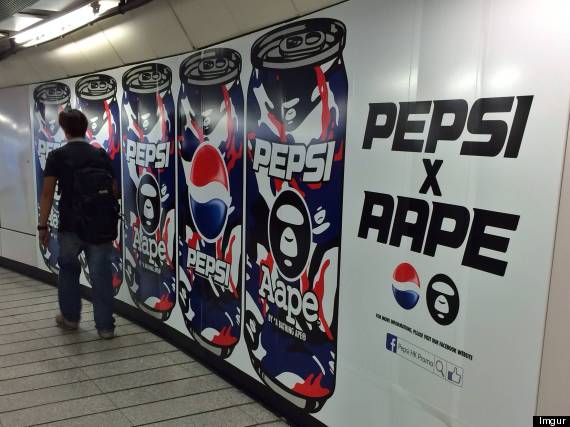 The photo, which was shared on Reddit early Monday, appears to be an ad for Pepsi's collaboration with Japanese clothing company A Bathing Ape's line AAPE. We reached out to both Pepsi and A Bathing Ape to ask them about their questionable font choice.

A Pepsi spokesperson confirmed in an email to The Huffington Post that the advertisement ran in Hong Kong. "We regret any misunderstanding caused by the font used and we apologize to anyone who was offended. We will not use this design in the future," the email said.

This Pepsi Ad Has Us Scratching Our Heads (PHOTO)
12 Ads Companies Don't Want You To See
1 / 12
Mountain Dew's Tyler The Creator Ad
After being roundly criticized for what many saw as a racist ad, <a href="https://www.huffpost.com/entry/tyler-the-creator-racist-mountain-dew-commercial-pepsico_n_3193650" target="_blank">PepsiCo pulled the Mountain Dew ad, developed by rapper Tyler the Creator</a>. The ad showed a battered woman attempting to identify a suspect from a lineup of black men.