PURCHASE, N.Y. (AP) -- Remember the Cola Wars? Get ready for the Bottle Wars.

PepsiCo Inc. on Tuesday unveiled a bottle made entirely of plant material, which it says bests the technology of competitor Coca-Cola and reduces its potential carbon footprint.

The bottle is made from switch grass, pine bark, corn husks and other materials. Ultimately, Pepsi plans to also use orange peels, oat hulls, potato scraps and other leftovers from its food business.

The new bottle looks, feels and protects the drink inside exactly the same as its current bottles, said Rocco Papalia, senior vice president of advanced research at PepsiCo. "It's indistinguishable." 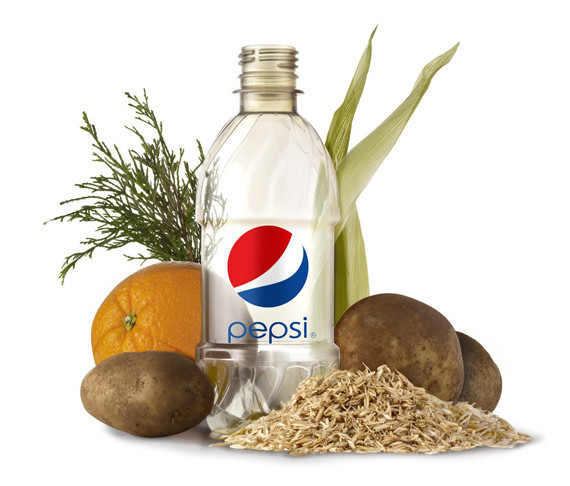 The plastic is the go-to because it's lightweight and shatter-resistant, its safety is well-researched and it doesn't affect flavors. It is not biodegradable or compostable. But it is fully recyclable, a characteristic both companies maintain in their new creations.

Traditional PET plastic is made using fossil fuels, like petroleum, a limited resource that's rising in price. By using plant material instead, companies reduce their environmental impact. Pepsi says the new plastic will cost about the same as traditional plastic.

The company, based in Purchase, N.Y., said it has had dozens of people working on the process for years. While PepsiCo wouldn't specify the cost to research and design the new bottle, Papalia said it is in the millions of dollars.

It's one of several steps PepsiCo has taken recently to reduce its environmental impact. The company created a fully compostable bag for its SunChips line. It cut the amount of plastic in its Aqua-Fina bottle in 2009. And its Naked Juice line is in the midst of switching to a bottle made entirely of recycled plastic bottles.

PepsiCo says of its 19 biggest brands, those that generate more than $1 billion in revenue, 11 are beverage brands that use PET. The company says the packaging will cost roughly the same as it does today.

PepsiCo plans to test the product in 2012 in a few hundred thousand bottles. Once the company is sure it can successfully produce the bottle at that scale, it will begin converting all its products over.