Kit Carson is described as a mountain man, an explorer, a scout, a soldier, a transcontinental courier and a general.

He is the hero of movies like 1933's Fighting with Kit Carson, and in the 1950s TV series The Adventures of Kit Carson, but California historian Kevin Starr calls him "bloodthirsty."

I visited the Kit Carson museum in Taos, New Mexico. The exhibits expose him as a gun fetishist.

One of his many victims was Rose Berryessa's ancestor, 75-year-old José de los Reyes Berryessa. He was on the way to visiting his son who was jailed along with other Berryessa brothers, and Mexican General Mariano Guadalupe Vallejo. They were taken prisoner by a group of white settlers called the "Bear Flaggers." Described as men capable of brutality by historian James David Hart, they challenged Mexican rule by establishing the independent Republic of California. It lasted for about a month.

The Californios, people descended from Spanish-speaking settlers from New Spain or Mexico, invited these men into their homes, graciously, only to be murdered. General Vallejo, who offered them breakfast and wine, was taken prisoner. While at it, the thugs stopped at Rancho Cabeza where Maria Cabrillio offered them hospitality. In return they attacked and killed Californios José Ramon's wife, Rosita. One of them boasted about having murdered one hundred Indians.

During a murderous rampage by the settlers, a total of eight Berryessa men were murdered. The invading 49ers, who gained control of the Californios' land by squatting on it, murdered both Californios and Indians.

Berryessa says that a few years ago she found herself, serendipitously, at the scene of the murder, which took place at San Rafael, while listening to a radio broadcast about Kit Carson. She drove her car to the side of the road, and wept, and though Rose Berryessa says she holds no grudges for what the white settlers and American invaders did to her ancestors, the Calfornios, spiritual wounds from this tragic history can still be stirred. Her late aunts were not as forgiving. They went to their graves angered by the theft of their lands that included parts of present day San Jose.

The Berryessas are descendants of Nicolas Antonio Berryessa and his sister María Isabel, who came to California in 1775-76 as members of the Juan Bautista de Anza expedition. As a result of Spanish land grants, families, who were members of the expedition, owned most of what is now Northern California. 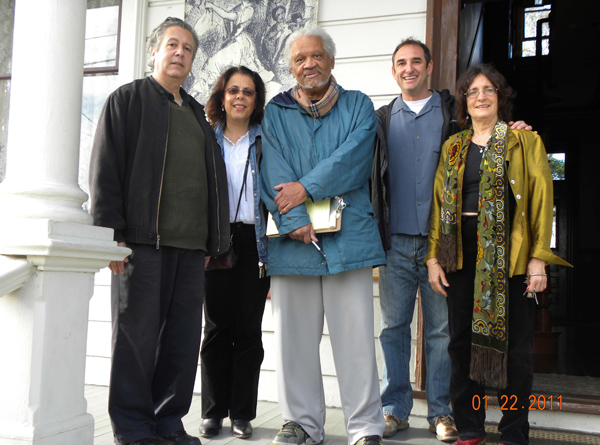 Rose, who was my student at the University of California at Berkeley, brought along her brother, David. Though they'd never met, intermarriage between the families has occurred on several occasions in the past including that between Juan José Peralta and Anna Isabel Berryessa in 1839.

Holly took us on a tour of the house which includes touchable exhibits, audios of oral histories, and a recreation of its original furnishings. Upon examining the genealogy chart on which the families were connected, Ken and Rose found that two of their relatives were Hollywood starlets during the 1930s. One performed in a two minute movie with Rudolph Valentino. But the biggest surprise was that Che Guevara was a mutual relative. 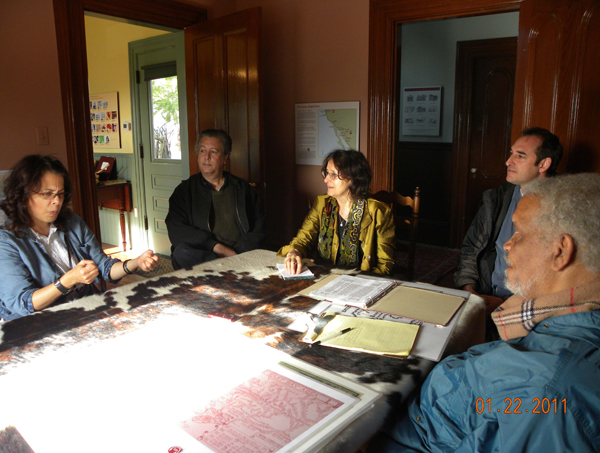 From Left to Right: Rose Berryessa, David Berryessa, Holly Alonso, Ken Talken and Ishmael Reed have a discussion in the living room of the Peralta Hacienda Home.

Not only is the home a reminder of Oakland's past, but it has become a community center where blacks, whites, Hispanics, and Native Americans gather to exchange stories and food, explore their shared history, create exhibits, and participate in picnics. A recent fund raiser called "Zorro By Night" drew a big crowd including Oakland's new mayor, Jean Quan, a good friend for the park to have in this time of budget cuts. Zorro, a fictional Californio character, takes the side of the poor against the landlords.

Though the Californios were wronged, Rose insists that Native Americans were here first and that the Californios occupied their land. Native Americans provided the labor that tended the Californios herds, picked their fruit and built their adobes. The Peraltas built adobes in 1821 and 1840. The 1840 adobe was destroyed by the earthquake of 1868. It was replaced by the current Victorian styled residence, the Antonio Peralta House, which was built in 1870, and is now the Museum of History and Community we were sitting in.

Yes, Carson murdered the De Haro twins, but there's no count of how many Indians, their father, Francisco De Haro, murdered as he put down a revolt of the Indians in 1824.

The reason families such as the Peraltas and the Berryessas were brought into what was then Alta California in the first place was to curb the outrages committed against Indian men and women. Junípero Serra, a priest, was eyewitness to Spanish soldiers lassoing, and then raping Indian women. When the Native men tried to stop it, they were shot.

It turned into a wonderful afternoon of reminiscences, some sadness, and lots of laughter, as they examined the family tree in which the histories of the Peraltas and Berryessas were entwined.

Before the squatters came, the Peraltas owned what is now Oakland and Berkeley. One of the squatters was a graduate of Columbia Law School named Horace Carpenter. Called a rogue and notorious by some historians, Carpentier (he changed his name) and his cronies set up the city of Oakland on Peralta land and he used some political shenanigans to get himself elected mayor.

Outraged, the Peraltas took the matter to court, but by the time they won, they were so indebted with legal bills and weakened by a family feud that they had to sell the land. Lake Merritt was once called Lake Peralta. The descendants of those early pioneers, who met that afternoon, agreed that restoring the name to Lake Peralta would be a modest gesture toward reconciliation and provide a forum that would be both healing and educational. A forum that would include Californios, Native Americans and perhaps descendants of the Bear Flaggers.

I'm all for the restoring the original name because Dr. Samuel Merritt, for whom the lake is named, didn't like writers. Called them "cranks."