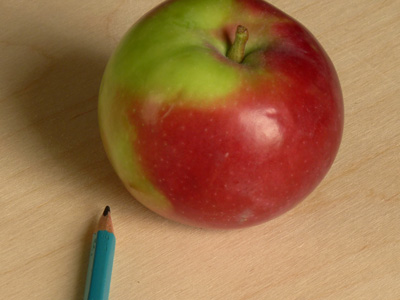 Painting from life relies on looking at things closely over a long period of time. At first the mind rebels: "Why are we staring at this apple? Surely we have better things to do." But once the mind relinquishes its shorthand version of the visual world, this first level is quickly past: "Oh, because we really know nothing about this apple." The mind becomes intrigued because it realizes it can learn. Trust that the process will bring results allows further levels to be explored with patience. Whether looking out or looking in, there are always more levels. No matter how accomplished, the painter who looks will always find more to see.

Let's imagine the simple process of drawing the outline of the apple from life with a pencil. It is sketched in lightly, then the process of correction begins. Why? Because it is not quite right! At first this is frustrating, but this frustration also creates the energy to correct the situation. The errors provide clues to their solution. Bit by bit, the outline gets better. Bit by bit, more is seen of the subtleties and intricacies of the form. It is essentially round, yes, but not like a circle is round, there's more. But is any place actually flat? No. Are there any concave places? Oh, yes. How can a single contour be so intensely articulated?

This is the beginning of nature's great lesson. We develop a shorthand version of the visual world in order to navigate through it, but what we see also contains tremendous detail and complexity. To the extent that we slow down, and look more closely, nature reveals more about its structure and meaning. This gentle, inherent profundity is not available when we are in a hurry. An apple, in this case, is just an apple, preferred as a snack or not. This attitude may be necessary in daily life, but is it useful for art? The answer depends on how art is defined: as an initial or spontaneous response, or one that is achieved through study over time. Matisse made apples that are flat, Cezanne made them out of planes, Chardin made them three dimensional without copying them pixel by pixel, Magritte made them real, but with an ironic perfection designed to question the concept of "real" itself. These approaches to the pictoral role of the apple are all different, yet succeed on their own terms as varieties of artistic transformation: as viewers we know the painted apple both is, and isn't, the actual apple. This suggests that, while reconciliation between the personal and the universal may never be achieved in global terms, it can occur -- is, in fact, necessary -- within the context of a given painter's style. Each painter approaches this puzzle individually. Yet, the created world is so profoundly detailed that to comprehend something even as conceptually basic as the outline of an apple, it is necessary to pay attention not only more closely, but in a different way.

Exploration of the seeing process leads to the interesting paradox of more being created from less. When we put a hold on temporal activity, our consciousness stops ranging around on the surface and begins to settle down. As it settles, it naturally goes deeper. How deep does it go? There are plateaus, but then, as in quantum mechanics, a sudden shift occurs and we are in a different orbital of awareness. The apple of an hour ago is not the apple we are seeing now. When the apple of the present is an hour old, it too has been superseded. How can this be?

A fascinating reciprocity comes into play through the simple act of looking more closely, suggesting the relativity or unreliability of perception itself. If we are constantly in a state of seeing more, then nothing can ever be quite as it seems. The object we look at changes, but so, necessarily, do we. Mundanely, the apple is an everyday fruit, but concentrating on it allows it to function as a portal or doorway into further levels of awareness, both of it, and of ourselves. In drawing or painting, what appears to be copying actually becomes a form of mutual transformation. As observers, we are taken beyond the confines of imitation or symbology into a realm where microcosm and macrocosm, personal and universal, are interacting in the present moment. Once this is experienced, nothing can ever be perceived of as "the same" again, because the concept of identity itself has been shown to exist in flux. In this situation -- the foundation of the realistic painting process -- there is no such thing as plain sight: seeing becomes analogous to evolving.