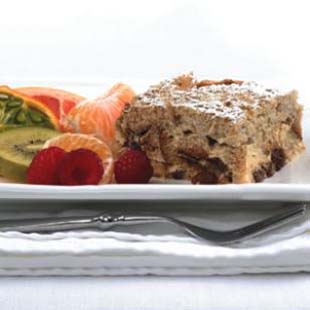 There is a small café called 3 Squares a few miles from the EatingWell offices that makes what I consider to be the world’s best French toast. It’s nothing fancy -- made with challah bread and served with cinnamon whipped cream, sliced berries and bananas. It is the kind of breakfast that I crave, and I have made it my mission to figure out how to make it (and make it healthier) at home. Here are my secrets to perfect, healthier French toast:

Get the Right Bread: You want bread that does not have too chewy or tough a crust or too many holes. This means steer clear of your beloved French baguette and fancy artisan breads. And while bread made from white all-purpose flour may taste good, it won’t do much for you nutritionally. But you don’t have to sacrifice taste to get the benefits of fiber from a whole-grain bread. To make a tasty, whole-grain French toast, I like to use a medium-density, semi-soft bread like thick-sliced whole-wheat, multi-grain or oatmeal sandwich bread, which is soft without being too delicate.

Use a Sturdy Pan: I like to make my French toast in a cast-iron pan, which gets nice and hot and maintains its heat evenly. I heat my pan slowly over medium-high heat and use just enough melted butter to barely coat the inside. This gives the toast a delicate, crispy exterior without drying out the interior. Think crème brulee—crackly, sugary shell on top of silky pudding.

Use Low-Fat Dairy: Traditional French toast recipes call for heavy cream, eggs and vanilla extract to make the custard. To make a healthier version with less fat and fewer calories I use reduced-fat or nonfat milk in place of the cream and a combination of whole eggs and egg whites. Replace one egg with two egg whites. No one will know the difference. Vanilla or almond extract and a sprinkle of cinnamon will add flavor without any added fat or calories.

Be Creative with Your Toppings: The French toast I get at 3 Squares Café is decadently topped with a generous dollop of cinnamon whipped cream and sliced fresh fruit. At home, I prefer something lighter. So, I whip just a tiny bit of heavy cream and fold it into nonfat Greek-style yogurt. I promise, it is delicious, and you save saturated fat and calories by cutting some of the whipped cream with thick and rich Greek-style yogurt. Just be careful not to eat the whole bowlful by yourself.

Other easy, healthy toppings include fresh fruit, a spoonful of fruit jam or preserves or even a smear of peanut or almond butter. Finally, a tablespoonful or two of genuine Vermont maple syrup is always a good choice—there’s nothing to beat it and a little goes a long way.

Emily Kennedy tests and develops recipes in the EatingWell Test Kitchen. Emily recently moved to Vermont from New York City, where she worked at Food & Wine, food52.com and Real Simple. She is a recent convert to the glories of kale and has a weakness for doughnuts, strawberry licorice and anything her Italian-American grandmother makes, especially pizza.