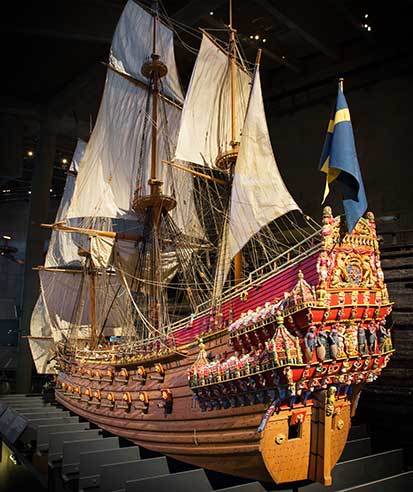 If you are ever in Stockholm, you must visit the Vasa Museum. It contains a complete warship launched in 1628 that sank 30 minutes later. Other than the ship itself, the museum contains objects and bones found in the wreck, and carefully analyzed by scientists.

The basic story of the sinking of the Vasa has important analogies to what often happens in education reform.

After the Vasa sank, the king, who commissioned it, Gustav II Adolphe, called together a commission to find out whose fault it was, to punish the guilty.

Yet the commission, after many interviews with survivors, found that no one did anything wrong. 3 ½ centuries later, modern researchers came to the same conclusion. Everything was in order. The skeleton of the helmsman was found still gripping the steering pole, trying heroically to turn the ship's bow into the wind to keep it from leaning over.

So what went wrong? The ship could never have sailed. It was built too top-heavy, with too much heavy wood and too many heavy guns on the top decks and too little ballast on the bottom. The Vasa was doomed, no matter what the captain and crew did.

In education reform, there is a constant debate about how much is contributed to effectiveness by a program as opposed to quality of implementation. In implementation science, there are occasionally claims that it does not matter what programs schools adopt, as long as they implement them well. But most researchers, developers, and educators agree that success only results from a combination of good programs and good implementation. Think of the relationship as multiplicative:

In the case of the Vasa, P=0, so no matter how good implementation was, the Vasa was doomed. In many educational programs, the same is true. For example, programs that are not well worked out, not well integrated into teachers' schedules and skill sets, or are too difficult to implement, are unlikely to work. One might argue that in order to have positive effects, a program must be very clear about what teachers are expected to do, so that professional development and coaching can be efficiently targeted to helping teachers do those things. Then we have to have evidence that links teachers' doing certain things to improving student learning. For example, providing teachers with professional development to enhance their content knowledge may not be helpful if teachers are not clear how to put this new knowledge into their daily teaching.

Rigorous research, especially under funding from IES and i3 in the U.S. and from EEF in England, is increasingly identifying proven programs as well as programs that consistently fail to improve student outcomes. The patterns are not perfectly clear, but in general those programs that do make a significant difference are ones that are well-designed, practical, and coherent.

If you think implementation alone will carry the day, keep in mind the skeleton of the heroic helmsman of the Vasa, spending 333 years on the seafloor trying to push the Vasa's bow into the wind. He did everything right, except for signing on to the wrong ship.