Marijuana users really enjoy strong weed, but would prefer that it came without paranoia, memory loss and impaired ability to function. That's according to a new report from the Global Drug Survey in partnership with The Huffington Post, which anonymously surveyed more than 38,000 users around the globe.

All marijuana is not created equal. Effects can vary depending on the plant variety, cultivation, processing and blending. Cannabis has two major plant types -- indica and sativa -- and hundreds of hybrid strains with different characteristics. It's produced in forms that include dried flowers, oil and wax.

The survey asked users what they'd like in a "perfect cannabis." The results show that the "global dominance of high potency [marijuana] leaves many users far from satisfied," the researchers say.

So what would the effects be of perfect pot -- or "balanced bud" as the Global Drug Survey calls it?

Users want their cannabis to be strong and pure. And they want it to have a distinct flavor, and to impart a high marked by greater sensory perception, allowing them to "comfortably" speak to others with more giggles and laughs, while giving them the "ability to function when stoned," according to the Global Drug Survey report.

Users report they don't like some side effects of strong marijuana, including hangover feelings, paranoia, harmful effects on the lungs, feelings of becoming forgetful, an urge to use more, and feelings of being distracted or preoccupied, according to the survey.

Responses to the Global Drug Survey: 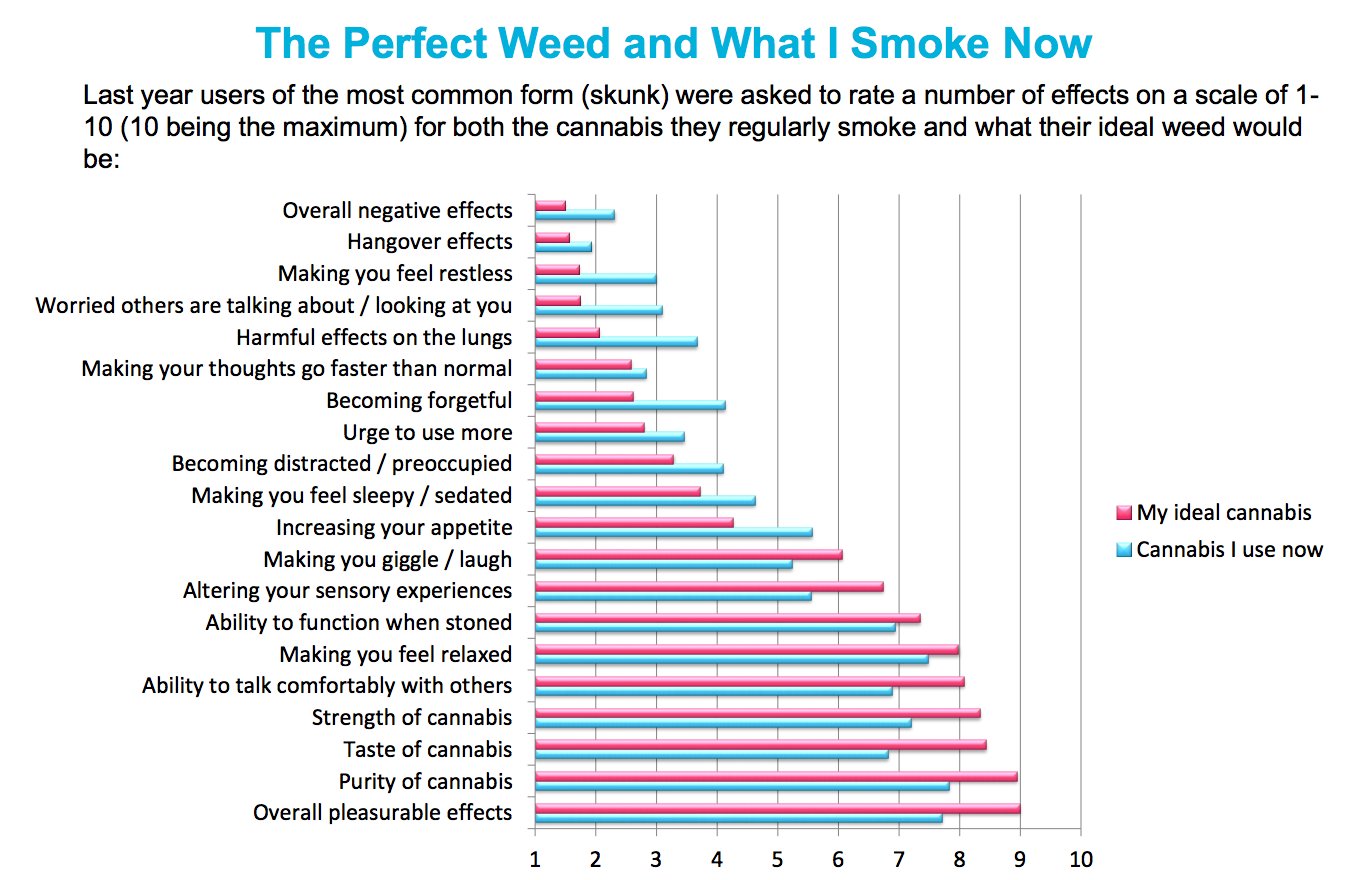 "There appears to be a paradox in the way people describe their perfect cannabis," the Global Drug Survey report says. "This is because most the effects of being ‘high’ are due to THC, but higher doses of this drug are associated with more negative psychological effects. So while they want a preparation with overall more pleasurable effects, they also describe wanting less of the negative effects that are also due to THC such as sedation, munchies, memory impairment, restlessness. It might well be what they are describing is a high potency THC containing preparation balanced by CBD which is missing from many current strains."

Currently, 21 states have legalized medical marijuana. Colorado and Washington have legalized marijuana for recreational use and more than a dozen other states are considering legalization in some form. With all that interest and all those regulated marketplaces, growers and sellers can tap into users' preferences with the Global Drug Survey data and help design a better plant.

The Global Drug Survey bills itself as the world's biggest annual survey of drug users. This year, 79,322 people from more than a dozen countries participated in the anonymous online questionnaire.

Because the Global Drug Survey does not involve a random sample of participants, its results cannot be considered representative of any larger population. "Ultimately, the only people that this study (like so many others) can definitively tell you about are those who have participated," the researchers say.