The other day, a friend and fellow mother shared an article that was written by a father of a dozen adult children, outlining how he raised fully-adjusted, well-mannered, college-educated, successful kids, and indicating that not paying their college tuitions (even though he could have) was just one indicator of his parenting prowess.

She was frustrated after reading it, because the author's list of parenting tactics seemed impossible for a mother at home raising two young boys while her husband worked long hours, sometimes out of town. Are their children destined to suffer a squandered future filled with social woes and overlooked opportunities because she doesn't hold them to the same standards as this Super Dad? Does she have a pair of potential criminals on her hands because they are mischievous spilling machines who show no promise of ceasing to make messes on the kitchen floor? Is she a failure because she can't get two children to eat the same foods, let alone 12 children?

After reading the article, part of me agreed with the author about certain things that make for ease of life with kids (sharing chores and limiting snacks, for instance), but a larger part of me was irritated with the preachy way this father presented how he (and his oft-pregnant wife) managed to produce such fine, upstanding citizens of the world.

And instead of driving me to adopt his pragmatic parenting advice to avoid having to pay my own children's college tuition, this blustery oratory on parenting perfectionism made me feel completely marginalized. I felt as if he was implying that any efforts that fall short of his list of parental responsibilities will inevitably lead to failed parenting.

And then I got a little indignant.

We already have the Mommy Wars, where Working Mothers and At-Home Mothers are at each other's throats, both vying for the title of World's Best Parent. This battle has only served to separate us into identifiable and competitive groups, instead of letting us support each other in the hardest job that anyone will ever bear.

Now we have a new player: Super Dad, a.k.a. Privileged Grandfather. He chimes in from his lofty perch on the far side of child-rearing, waving at moms in the trenches covered in diaper cream, smashed peas and Goldfish crumbs, no matter if they're dressed in yoga pants or business casual. He waxes nostalgic about his own parenting past that is blurred in all the right places. He lectures us about the good old days when he and his wife managed the children according to rules they came up with together, and he tells us that this is the key to raising perfect children. I will just briefly add his admission of holding a "prosperous job" while his wife presumably stayed home.

I realize in that large a family, rules and regulations are needed to avoid chaos. If it's important in our family of four that everyone clean up his or her own mess, how much more important should it be in a houseful of 14? If it takes me half a day to do all the laundry that my family creates in a week, how much longer would it take one person to tackle washing clothes for 14? A large family needs to share the load, so to speak. In our measly family, constant adherence to the rules is unnecessary to get the job done. Sometimes my son leaves a dirty shirt on the floor of his room, and I put it in the hamper for him. 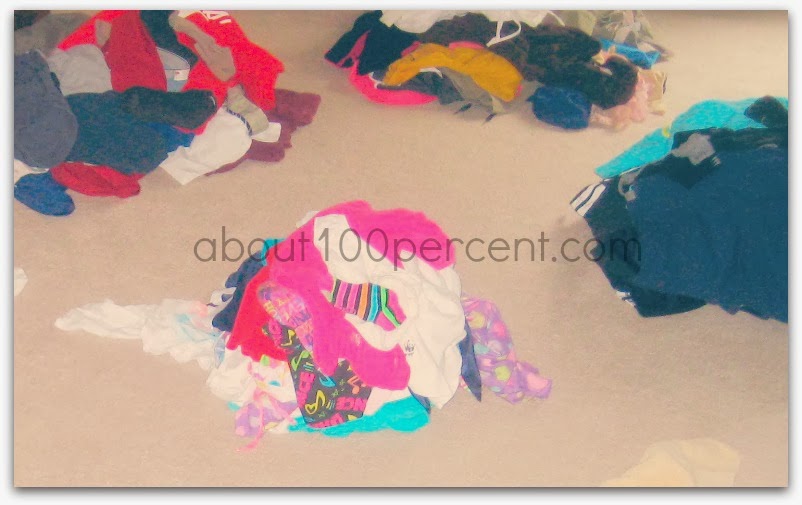 In a large family, certain things aren't realistic. If my husband and I struggle to save money in order to help our two children with college, how much more difficult would it be to save for ten more kids at any level of prosperity? Similarly, if one of 12 children grows out of his shoes, not all 12 children should get a new pair of shoes. In our family the situation is different. I don't think it means that I'm producing spoiled brats just because once in a while my children get a pair of shoes that they don't need.

Should parents be disciplined and have patience in teaching their children basic life skills? Sure. It only takes me four hours to clean my house from top to bottom. Believe me: I have the time. But if I do it myself every week, how do my children get a chance to learn how to clean, or even that it needs to be done? They don't. So we all share the task. I think Super Dad would agree with me. But I will mention that our shared chore time is not without arguments, and whining about who does what, and, occasionally, tears. And sometimes, cleaning just isn't worth the emotions, and the chores are forgotten. We're not perfect, but we try. I get the feeling that Super Dad would never admit that his children executed tasks with anything but perfect agreeableness, nor would he admit that he might have been inconsistent with rules or discipline once or twice. 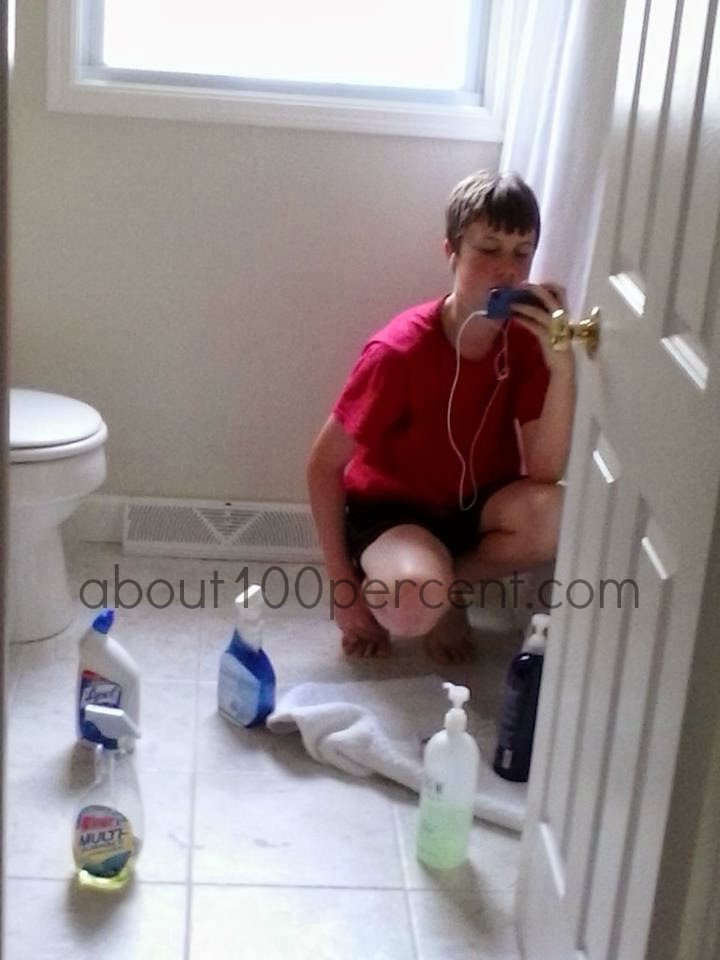 Not much cleaning got done that day.

He forgot to mention that it takes several attempts to enforce rules in a household; his blithe mention that "boys and girls had to learn to sew" fails to specify that he or his wife probably spent hours teaching again and again the mechanics of sewing on buttons. He fails to acknowledge that children don't learn by being told, nor by seeing or doing something once. It probably took several frustrating confrontations before the kids caught on that they had to do it themselves. Then again, maybe his kids were perfect from the womb and were born with a natural tendency to thread a needle. But probably not.

To be fair, Super Dad never said "Everyone should parent like I did to produce perfect kids." At no point did he profess to be perfect, or all-knowing, or even great. He merely presented how he did things. But his declarations filled in the blanks, the empty spots where today's mothers already feel lacking. This article added to the guilt mothers already feel about not giving our kids every single benefit we can. It makes us feel bad about our worth in a world where our worth is already under attack.

I hate that this kind of article makes mothers question our own qualifications, and forces us to compare ourselves against unattainable goals. Parenting is hard enough without being faced with all the things I'm not doing for my children's future well-being. This article demoralizes parents who deal with food allergies, developmental delays, learning challenges, sensory issues and a myriad of other things that we face today, things that weren't common when Super Dad was in charge.

Raising flawed kids has tested my mettle, given me patience and grown me in places I never thought I'd needed to grow. It has humbled me like nothing else ever could. Never again will I feel as if I am Master of the Universe after dealing with a strong-willed child who uses arguing as a preferred mode of communication or one who is firmly against eating fruit of any kind. Raising flawed kids as a flawed parent has tested and stretched me in ways that I don't think I would have been stretched if I had just drawn up a set of rules to enforce upon an army of offspring. I have learned that father (and often mother) doesn't always know best, and my children, individuals who are so like us and so unlike us in all the ways you can think, have taught me that.

My children will not be gifted a junkyard car and a how-to manual so that they learn how an engine works and to feel the accomplishment of building their own vehicle. I will not be asking teachers to put my children into advanced placement classes when they did not earn a spot on their own. They will not be taken camping in order to be taught how to survive in the wild, and we did not send them across oceans to visit relatives when they were 5 years old.

They will most likely reach adulthood in an imperfect state, full of questions about things they did not learn at home. I am not a perfect parent. They are not perfect kids. The truth is I'd rather have my two imperfect kids any day than Super Dad's 12 perfect ones. I'm sure he feels the same way.

And I'm OK with that. 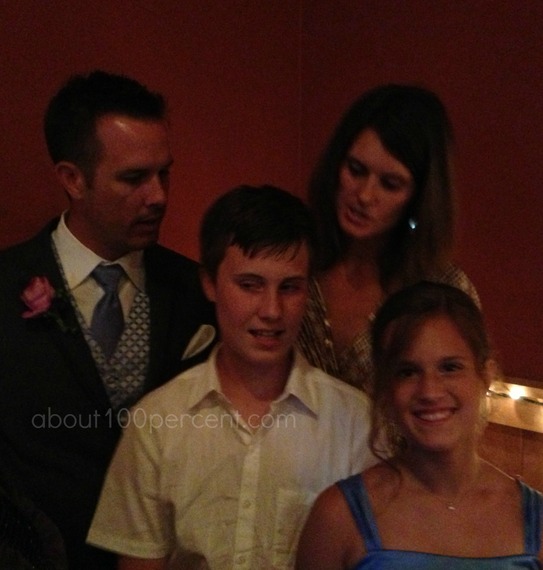 More:
Parenting parenting adviceperfect parentingParentsChildren
Newsletter Sign Up
Raise the kind of person you'd like to know
Subscribe to our parenting newsletter.
Successfully Subscribed!
Realness delivered to your inbox

If You're Even A Little Bit Into Fall, You Need These 49 Things