The history of performance art stretches much further than one might think. Scholars, such as Miriam Griffin, fellow of Somerville College, Oxford, point to performative actions in ancient Greece, such as Diogenes repeatedly acting as a dog ("cynic") in his performances.

In the 16th century, poets throughout the Iberian Peninsula and in the newly discovered colonies in the Americas found live art a new way of presenting their work. In a cross between visual arts, music and literature, they would draw each paragraph of their poems, hang them in lines in public spaces (such as market fairs, public squares and churches' front yards) and sing their poetry to an audience of passers-by.

There were also the romantics whom, in the 19th century, invaded cemeteries to desecrate corpses and recite their poetry to dead bodies. 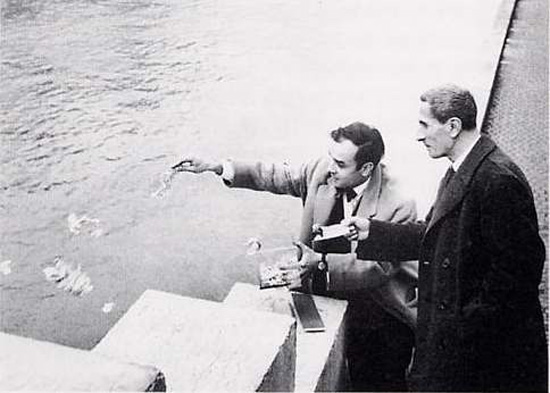 It is also impossible not to mention Yves Klein's Zone de Sensibilité Picturale et Immatérielle (Zone of Immaterial Pictorial Sensibility). The selling of empty space, the so-called immaterial zone, which took the form of a check in exchange for gold, was, in itself, perhaps the start of contemporary performance -- given the blurring distinctions between real life and art. The action went further, with the burning of the checks, if the buyers so wished, and the throwing of half the gold in the Seine. This ritual would have the presence of two witnesses, an arts critic and a museum director. The use of ritual in the artists' work was a constant. 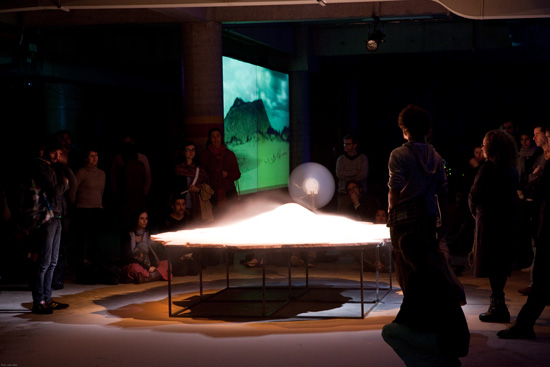 Marta Soares is a Brazilian choreographer and dancer who ventured into performance art after extensive research into human subjectivities and rituals. She used the ancient burying rituals of native Brazilian inhabitants from a pre-colonial time to recreate a field of forces in which the choreographic movement passes through the movement of sand and her own inability to move under 450 kg of it. While the audiences bear testimony to the remains of the fields, that were once used by these peoples to stage their ritual burials, on video screens behind her own mountain of sand. The piece was presented in Zagreb, Croatia, in 2012, during the Queer Zagreb Festival, and has also found wonderful reception throughout Europe. It is one of the very clear examples of transgressive art, of art that challenges not only its format (dance) but also the audience, which patiently waits for the body of the performer to be uncovered during the performance.

By definition, a ritual is a gathering with a common and shared purpose, a sort of contract or common agreement between the audience and the artist. "Ordinary objects or acts acquire symbolic significance through incorporation into a shared belief system." (But Is it Art?, Cynthia Freeland, 2001). Many performance artists use this premise as the start of their work, both by creating from the start the shared belief system, such as Klein, or by utilizing another's to recreate another reality, like Marta Soares with her enormous sand-installation-as-a-burial-site.

In our times, genres are blurred. Performance art, itself, went through a transformation from what it originally was in the '60s -- which is often referred to as the golden age of performance art, perhaps, simply, because it is when it entered into the mainstream picture using media as its ally. It also may be quite peculiar, given the common understanding that performance art cannot be repeated, and that its documentation is very questionable. Artists may no more perform acts in galleries for an audience, they may make you feel like an actor in an "immersive installation," something as performative as Klein's burning of checks or arts recreation of burial realities.

But what is performativity? There are many answers, and the interdisciplinarity of it is what makes it so interesting. It could be said that it is the capacity of speech, or a production of a "speaking body" (Felman). It could be said, as well, that it is other forms of non-verbal communication, in which the audience actively participates and constructs an identity or shared belief. But, it might not be enough to perform oneself, the audience conditions and channels that perform and give it meaning.

Performance art as a medium

- Thierry de Duve, "When Form Has Become Attitude and Beyond," 2007

Stating the obvious, it is safe to say that language is a collection of signs. So is performance art. Thierry de Duve, from the University of Lille 3, points to the failing of arts teaching in contemporary art through the failure of both the tradition and, what he calls, the Bauhaus system, "From Rimbaud to Beuys: Everyone is an artist." According to him, practically all art teachers know that talent exists and that only a few of their students will succeed. Why? Isn't creativity that innate capacity of symbolization inherent to all human beings (that specific fantasy of reparation), learned in the infancy and carried on to complex systems through adulthood (Melanie Klein)? Were the romantic and democratic ideals of egalitarianism irreparably lost in a world of terrific wars and terror?

Performance art, itself, may offer not only a beacon of hope, but be one of the answers to these questions. As a medium itself, as a collection of signs that in themselves speak of symbolic relationships between the artist and his work, his audience and his space, performance art demonstrates that while creativity does play a role, talent, that ineffable quality of the relationships of meanings that cannot be touched but that can be felt and most certainly discussed.

When Vlasta Delimar and Milan Božić re-enacted Gotovac's performances in London, Paris, Venice and other towns, they remind us that a performance cannot be repeated, and even when it is, of the powerful symbolic significance of an homage, and of the actuality and immediacy and novelty of performance art as political.

The medium by definition comes neither from creativity nor talent. Yet the place of origin upon which the performance bases itself is real and concrete, such as Marta Soares' ancient burial sites remains or Klein's checks, gold and spaces -- even empty. 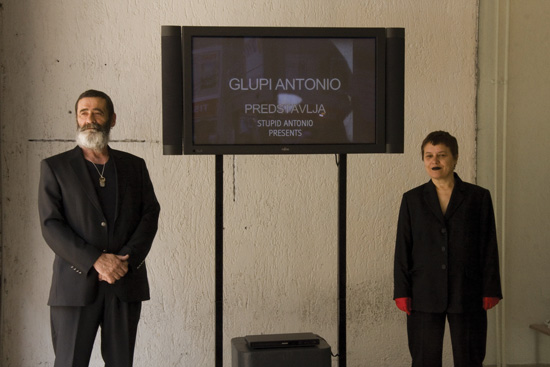 Vlasta Delimar and Milan Božić's re-enacting of Gotovac's performances highlight also that performance is immediate and its political aspect mutable. It can never be repeated, though it may acquire new meanings. Such as in language, when linguistic changes bring forward the coining of new or mutated meanings to old words.

The use of the word "action" to define an act of performance art, as preferred by Joseph Beuys, for example, was chosen to set it apart from the more entertaining forms of art, such as traditional theater.

A fast dictionary to performance art (modified from theartstory.org)

Action
The term "action" constitutes one of the earliest styles within modern performance art. In part, it serves to distinguish the performance from traditional forms of entertainment, but it also highlights an aspect of the way performers viewed their activities. Some saw their performances as related to the kind of dramatic encounter between painter and painting that critic Harold Rosenberg talked of in his essay "The American Action Painters" (1952). Others liked the word action for its open-endedness, its suggestion than any kind of activity could constitute a performance. For example, early conceptual actions by Yoko Ono consisted of a set of proposals that the participant could undertake, such as, "draw an imaginary map... go walking on an actual street according to the map..."

Body Art
Body art was central to the performance art of the 1960s, and the terms are sometimes used interchangeably in this context. It encompasses artists who position themselves as living sculpture, as well as those who use their bodies as a canvas. However, the definition of whether an act is body art or not is often up to the artist. For example, as a performance artist that uses cosmetic surgery, Orlan is deeply involved in the expression of the body, yet she describes her work as "carnal art": she does not use her body to make art, her body is art.

Happenings
Happenings were a popular mode of performance that arose in the 1960s, and which took place in all kinds of unconventional venues. Heavily influenced by Dada, they required a more active participation from viewers/spectators, and were often characterized by an improvisational attitude. While certain aspects of the performance were generally planned, the transitory and improvisational nature of the event attempted to stimulate a critical consciousness in the viewer, and to challenge the notion that art must reside in a static object.

Endurance
A number of prominent performance artists have made endurance an important part of their practice. They may involve themselves in rituals that border on torture or abuse, yet the purpose is less to test what the artist can survive than to explore such issues as human tenacity, determination and patience. Taiwanese artist Tehching Hsieh has been one important exponent of this approach; Marina Abramovic offers other examples. Allan Kaprow was perhaps the most influential figure in the happenings movement, though others who were involved include Claes Oldenburg, who would later be associated with Pop Art.

Ritual
Ritual has often been an important part of some performance artists' work. For example, Marina Abramović has used ritual in much of her work, making her performances seem quasi-religious. This demonstrates that while some aspects of the performance art movement have been aimed at demystifying art, bringing it closer to the realms of everyday life, some elements in the movement have sought to use it as a vehicle for re-mystifying art, returning to it some sense of the sacred that art has lost in modern times.

Manifesto
Manifestos have been helping artists define their own position and ideas, and they have helped us understand a certain aspect of art. There is a whole separate text that should be written about manifestos in art, but one of my favorite quotes from any manifesto comes from the one done by Marina Abramović where she states: "An artist should never be in a relationship with another artist." Well, she is the first one that could say that this rule went out the window for her, obviously. But then again, why I like it so much is because it is such a simple rule -- and yet one that is even simpler to brake -- putting in place what a manifesto often is, a frozen moment in time, a performance art in itself.