Mireille Suzanne Francette Porte has been making a name for herself in the art world since she became ORLAN in the early 1970s. The French performance artist and feminist icon is best known for transforming herself into a living work of art through plastic surgery. While Botox, facelifts and other techniques are routinely used to bring subjects closer to the established ideals of beauty, ORLAN uses these tools to question beauty norms.

In the 1990s, ORLAN had her forehead altered to mirror the protruding brow of Leonardo's "Mona Lisa," and her chin made to resemble Botticelli's "Venus." She used the materials normally reserved for cheek implants and had them placed on her forehead, creating horn-like protrusions. "If you were to describe me without anyone being able to see me, they would think I am a monster, that I am not fuckable," ORLAN told the Guardian in 2009. "But if they see me, that could perhaps change."

We asked ORLAN questions about her ongoing relationship with technology, art and feminism. Scroll down for a slideshow of her work. 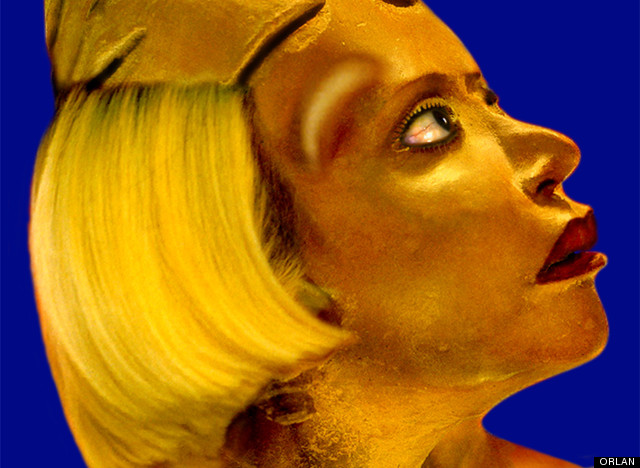 HP: For your first surgery you insisted you remain conscious throughout. How much physical sensation could you feel? What was the experience like?

HP: Why do you think women are repeatedly aligned with the idea of nature, as in the image of Mother Nature?


O: Because women can be pregnant if they wish it. It is a lot easier then to see the link between women and nature than between men and nature. Women are natural. The interview continues after the slideshow.

HP: Have you ever put yourself in real danger for your artwork?

O: I wanted to jeopardize my own image. With my image I had already produced art pieces such as videos of photographs. I liked my image a lot but you know, as soon as you do something, you are in danger. If one leaves home one might get a flower pot on his head and die. What's more, there are a lot of people who do crazy things without necessarily being crazy, for example crossing the Atlantic solo. Some crazy things which requires you not to be crazy to achieve them.

HP: You once had an interaction with Madonna where you offered her leftovers from your surgery. As another woman who constantly transforms her image and identity yet remains attached to the male gaze, what do you think is her contribution to art?

O: I gave her a resin spindle which preserves a few milligrams of my fat. A majority of the successful women on the pop scene conform to what a woman is supposed to be. Some have tried to get things moving, for example Nina Hagen, to some extent Madonna herself, or in France Catherine Ringer. They have tried to modify the image. But sometimes the image has a hard time changing the eye -- to change the relationship between the image and the eye takes longer.

HP: How long has it been since your last surgery? Why did you decide to stop?

O: My job is to be an artist and thus I use different media to deal with the status of the body in our society. I have organized surgery only between 1990 and 1993. These surgeries are a hinge in my work.

I have always questioned the status of the body in our society. I have always been working on social, political, cultural and religious pressures, which prints them in the flesh and in particular in women's flesh. The first part of my work before the surgery questioned my Occidental culture and my identity. My current work is about non-Occidental cultures. I use the new image of myself that I have coined in order to produce new images and new pieces of art.

Surgery is not my job. I have been the first artist to use aesthetic surgery in another context -- not to appear younger or better according to the designated pattern. I wanted to disrupt the standarts of beauty. 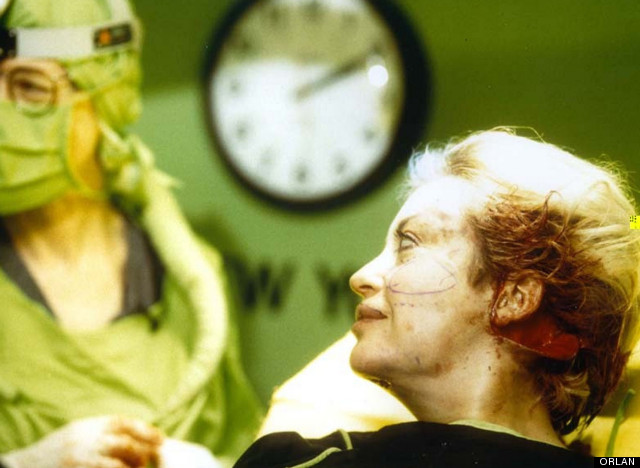 HP: NYT Critic Ken Johnson recently received criticism for using the phrase "the type of art that women tend to make." Are you ever frustrated that men don't have to grapple with issues of sexuality, beauty and identity as much as women do?

O: I don't know who are the men and who are the women. In French I used to say "je suis un femme et une homme." That is to say a feminine male and a masculine female. A she man and a he woman. What I am interested in is developing a singularity, which would be my own.

Some men develop their own singularity. Football makes men conform to stereotypes: the warrior or the hunter. Football produces a certain kind of masculinity — the drunk kind, the king who will yell the worst nationalist's ideas. In front of those, it is very difficult to be a dignified woman.

HP: Over the course of your career, would you say you've seen the relationship between women and beauty progress?

O: Beauty is the product of the dominant ideology. (Thus when ideology changes, the ideal body follows.) We can see that in the history of art. Bodies by Cranach or Rubens or Hamilton do not look alike. This is very relevant also in all the beauty standarts out of occident that I am interested in and that I question in my work. Beauty in pre-Columbian art or in Africa is very different from our criteria of beauty. Our time hates flesh and urges us towards anorexia, while we have all eternity to be skeletal.