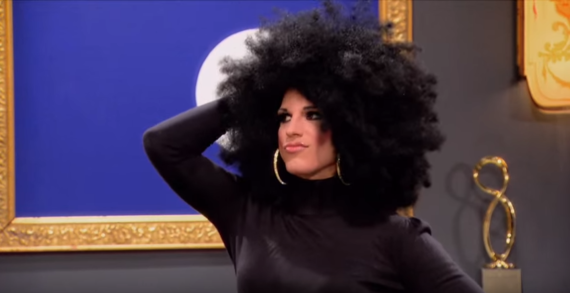 I've been watching RuPaul's Drag Race since the very beginning of the show. In many ways, as the show has grown, so have I and that's lead me to having this complicated relationship with not only Drag Race, but also with RuPaul and especially his fanbase. As I move into a stage in my life where I am more aware of things, I cannot look at even some of my favorite shows and feel like they are without criticism. That is part of the burden that comes with being socially aware. You start to recognize how oppression is packaged, watered down and sold in mainstream entertainment under the guise of comedy. While Drag Race is a show about an art form that is supposedly subversive and counter culture, it is effectively part of the mainstream and is bound to be problematic, and therefore isn't immune to criticism.

I have a segment on my YouTube channel where I answer questions sent to me from viewers called True Tea. One week, someone asked me what I thought about Drag Race's treatment of black queens and how they were edited. I answered the question and uploaded the video with the title "Is RuPaul's Drag Race Racist?" I give my videos clickbait titles from time to time because I've learned that regardless of the actual content, some people are determined to not understand. I'll be transparent and say that I don't mind controversy, but this video was filmed, uploaded and scheduled long before the scheduling of the RuVeal. Coincidentally, it was uploaded a few days after. In the video, I go on several tangents, but the one that I went on that got a lot of feathers ruffled was my argument that RuPaul felt, to me like a "white man in blackface." A lot of his, mostly white gay, audience took a lot of offense to this part of the video and there's a part of me that understands why. It sounds bad, it's not flattering and it sounds almost like I'm arguing that RuPaul is a racist (something I wouldn't do, because of my stance on racism). However, here's what I actually meant: RuPaul presents a black narrative that is acceptable by the white mainstream. He selects a handful of caricatures, mostly of black women, and presents them to what is usually a white audience and invites them to laugh at said caricatures. Now, I could certainly draw parallels between these caricatures and actual black face characterizations, but mostly what I was arguing is that he presents a very contrived idea of blackness and it's one that's usually seen as favorable, entertaining and expected by the mainstream gay community, that happens to be white. I expanded my criticisms here.

Recently, I was in New York shooting for MTV and speaking at a college. It was my first time in New York, and I wanted to go to a drag show. So my sister Dakota invited me out to a drag show at one of their favorite little bars in Brooklyn where season 8's Thorgy Thor was performing. I'd never seen a drag show in New York and this was a lot more down to earth than I had anticipated, but I loved it. I watched Thorgy perform a News show that slayed my soul and a Whitney Houston lip-sync that was both busted and beautiful. I loved it. Then there were was a competition where audience members were invited onto the stage to get up in drags in under 5 minutes. Two cute white guys were picked out of the audience and the clock was set. We watched them struggle to put on a wig, a dress and slather their faces with party city make up. One of them managed to fold up the large dress into a nicer, smaller more form fitting one. The other just put a belt on it -- a person after my own heart. I thought it was a cute little challenge... and then it hit me. That wig was a massive 4c textured afro and those dresses had distinctly African print all over them. Now, in these situations, I find myself saying "It's not that big of a deal." I'm not someone who is easily offended and I'm not someone who particularly likes to engage in conversations about racism when enjoying a cocktail. However, I couldn't walk away from this night without thinking about the fact that, in this context, there was nothing special or even funny about these two white men getting dressed up. Sure, they looked busted, but the funniest thing about them was that they were white men wearing Afros and Kente Cloth. I also couldn't ignore that while the bar was certainly diverse, I was one of maybe three other black faces in the room.

Last week on RuPaul's Drag Race, they did a skit fashioned after the FOX TV show, Empire. Seeing that this was what was to come from last week's preview made me very very nervous and unfortunately I had every right to be. Empire is a show about siblings who are fighting to take over the Hip Hop empire of their terminally ill father, Lucious Lyon. Cookie Lyon is Lucious' ex wife who, upon her release from prison seeks to get back at Lucious for betraying her. One of the ways she does this is by supporting her gay son, Jamal who Luscious has rejected because of his homosexuality. RuCo's Empire is essentially the same story, but with a little bit of ableism and very uncomfortable performative blackness. To be fair, there were only four black queens on this year's show and by the time of this episode, one of them had been eliminated. So there was bound to be awkwardness because we have these non-black drag queens playing characters that are supposed to be black. The question then becomes: what does that mean? Well, to RuPaul, it means popping tongues, switching your neck, bobbing your head and imitating AAVE while snapping in the air. While the queens were performing their scene, they were directed by Ru and the first lady of Hip Hop, Faith Evans to do even more of this.

Watching Derick Berry, a man who performs (very well) as Britney Spears for a living, in a 4c wig, trying so hard to give them more "ghetto" was cringe-worthy, to say the least. I found myself absolutely baffled at how two black people were sitting there directing non-black queens on how to act more black. RuPaul's anti-blackness does not surprise me at this point, but this was almost too obvious that I found myself in complete and utter disbelief. Often times I feel that my criticisms are reaching, but this was so textbook, i'm confused by how other people don't entirely see it. When we got to see the final versions of the skits, I found myself cringing, but also being extremely underwhelmed. Let's take away the bad acting and the awkwardness of these non-black queens doing their best blackcent, the skit was terribly written and without the performances of Thorgy Thor and Bob the Drag Queen, it would have been an utter waste of time. I found myself thinking "why did this need to happen?" and the only reason I could come up with was that Empire is a hot and trending show. This skit didn't need to happen. It wasn't memorable and it wasn't really that entertaining, but it happened anyway. When Michelle Visage critiqued Derick Berry, she said that he needed more "soul." What does that even mean?

What I'd like people to understand is that RuPaul's Drag Race is mainstream and by proxy problematic. The problem with RuCo's Empire is that it wasn't necessary nor funny, but they thought that it would be. I don't know who writes the skits for Drag Race, but i can tell that they aren't terribly creative and have a very shallow view of blackness. RuPaul is black and let's just pretend that the writer of the skit was also black, that doesn't mean that this situation wasn't anti-black. In the mainstream, when black people are anti-black, they are rewarded. They're one of the good ones who understands and "gets" it. The exceptional negro who's willing to operate in the name of white power and supremacy with a black face. That black friend who you can refer to every time you've been racist because you know they agree with you. To me, this is how RuPaul feels. His response to criticism can be summarized by his poignant words "get over it, bitch." He is dismissive and believes that people just take things way too seriously.

As someone who isn't easily offended and deals with a ton of racism because of work, I'll tell you right now, this isn't really about me being offended, it's about how certain ideas play into biases that maintain the status quo of white supremacy. As a black woman, I have to deal with the "angry sassy black girl who don't take no shit from nobody" stereotype all the time. I can sit here and speak "properly," politely and calmly, but I'm always loud, angry, irrational and unintelligent. In my video about RuPaul, I was pretty pleasant and joking even, but I had to read so many comments about how angry and hateful I was even after stating that I like RuPaul and respect him for his contribution to culture. While, sure, these are jokes and not meant to be taken seriously, they are a reflection of where our society is. Someone sat down and thought that this skit would be funny. Someone sat down and thought it was going to be a hit because we see caricatures of blackness naturally funny or entertaining. Any tired queen can put on an Afro and call themselves a ghetto hoe and people will laugh. It's easy, it's simple and it's not creative. That's why I believe they even attempted this skit.

Do I still watch the show? Yes. Will I continue to watch the show? Absolutely. Do I still like the show? Completely. I like the show because it gives a platform to so many queens who need a big break. I like it because it's mainstreamed many aspects of gay culture and as an unapologetic gay rights advocate, I love that. However, the show is problematic and it often relies on oppressive tropes that for some reason seem to be excused because RuPaul is black and gay. There are so many more aspects of the show to criticize, especially with how race is handled on the show, but I don't have all day to critique everything. It's very telling to me that the general response to my videos and posts about RuPaul from black people have been agreement, but non-black fans of the show have attacked me for my criticisms. I will never devalue the accomplishments of RuPaul and I will never minimize the amazing things that he's done, but like most people, he is not perfect or above reproach. He is a gay icon, but I struggle to say he is a Black icon in light of his anti-blackness.