Judah Low is one of the heroes of China Miéville's novel Iron Council. Low makes golems. Traditionally, a golem is a clay man animated by magic. 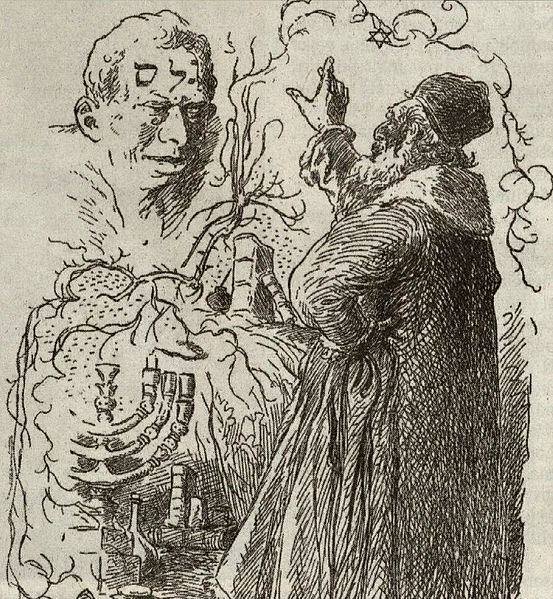 In the fantastical world of Iron Council, golem-making is well established, complete with university courses and theory:

What we do is an intervention, Pennyhaugh lectures Judah from his notes, -- a reorganization. The living cannot be made a golem -- because with the vitality of orgone, flesh and vegetable is matter interacting with its own mechanisms. The unalive, though, is inert because it happens to lie just so. We make it meaningful. We do not order it but point out the order that inheres unseen, always already there. This act of pointing is at least as much assertion and persuasion as observation. We see structure, and in pointing it out we see mechanisms and grasp them, and we twist. Because patterns are asserted not in stasis but in change. Golemetry is an interruption. It is a subordinating of the static IS to the active AM. -- p. 205

Judah Low ultimately outdoes all other golem-makers. They know the theory, but they intuitively think in terms of the clay-man model. Low is radical: He deeply understands "unalive" as the only limit on his medium. He makes golems out of heaps of corpses, shattered railroad tracks, air, light, sound...

One real-world equivalent of the golem is the puppet: matter persuaded into meaningful motion by human interruption. And the puppet, like the golem, is prone to the clay-man restriction on its nature: 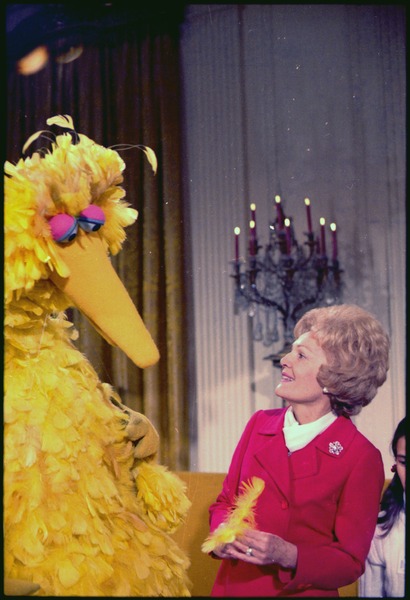 When we think about puppets today, we mostly think about Muppets. Muppets, like all other anthropomorphic puppets, are capable of the most startling and delightful resemblances to living things. They can move like them, express emotions like them, display little tics which we overlook in everyday life, but which become precious and beautiful when meticulously repeated by a puppet. People love this quality of puppets. Just ask the producers of War Horse.

As great as all that is, it is not the only mode in which puppetry can take place. New York puppeteer Kate Brehm is a lot like Judah Low. Ask Brehm, "What should be puppetized?" and she will tell you, "Everything."

Brehm has coined the term "performing design" to describe the work she does. A few years ago, she created the Poofs, human-sized tunicate-like puppets capable of a surprising amount of humor and poignancy: 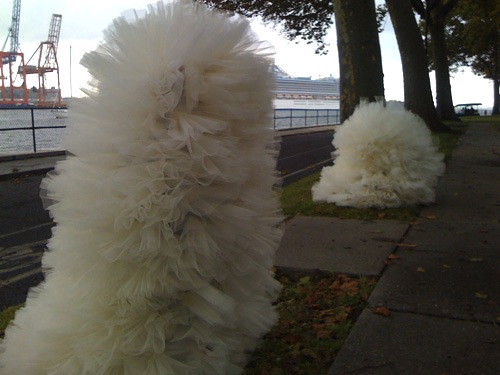 Think about it. You and I are sitting in a cafe, having a cup of coffee, and I say to you, "All things are puppets." You consider it, and you say, "Okaaaay -- this coffee cup is a puppet. These little packs of sugar are puppets. This spoon is a puppet."

That's an intermediate step. It's broad, but it's not broader than, for instance, Disney's Beauty and the Beast.

This is how Kate Brehm thinks when she thinks about puppets.

I recently had the good fortune to see her work-in-progress The Eye Which We Do Not Have. It is Brehm's most complete effort at total puppetization yet. With lingering traces of Hitchcock and du Maurier, it is ostensibly the story of a woman losing her mind over an unhappy affair. But the story is nearly submerged in a universe come shuddering to life.

The "stage" is composed of two doors. In each door, there are three windows, through which we see into the space of the play. The windows have flat shades. The shades are on rails. And the first several minutes of the play are a dance of the shades:

This serves as a kind of introduction to the range of animation we can expect. It is not meaningless kinetic activity. Accompanied by the theme music from Vertigo, it is a menacing bit of performance: unexplained, mysterious, and somehow threatening, as if our eyes were blinking by external command.

From there, it's off to the races. Brehm frequently references cinema, which has implicitly recognized point-of-view, edits, and the frame as puppets since Sergei Eisenstein, Orson Welles and Gregg Toland swaggered onto the scene. Brehm appropriates this grammar by occasionally converting her six windows into a kind of moving storyboard, as in a sequence of the heroine running up a flight of stairs: 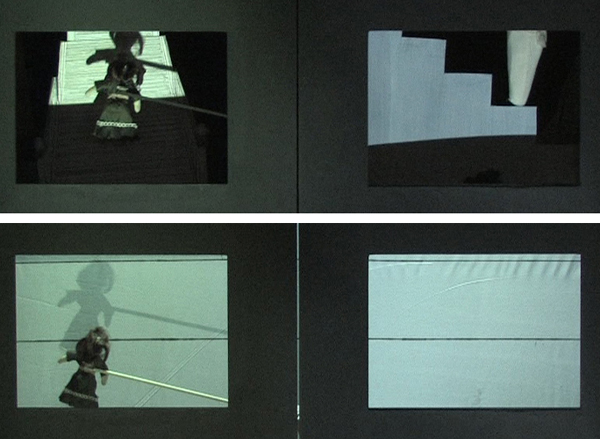 This is puppetry-as-montage. She also performs puppetry-as-mise-en-scene by, for instance, rotating a set mid-scene, from a level perspective to a bird's-eye-view:

"Look," you might be inclined to say, "rotating the set is a long-standing trope of theatrical machinery. What makes this special?" I think that what makes it special is the purpose for which the set is rotated. Ordinarily, it's a purely functional act. It changes the imaginary location visible to the audience. In Brehm's world, it is, like every single other thing, a means of expression. It corresponds with a sudden sense of terror in the narrative. That is very special indeed.

This sense of the expressiveness of all things covers not only point of view, but scale. In a hallucination scene, the heroine struggles with a group of amusingly be-penised paper cutout men: 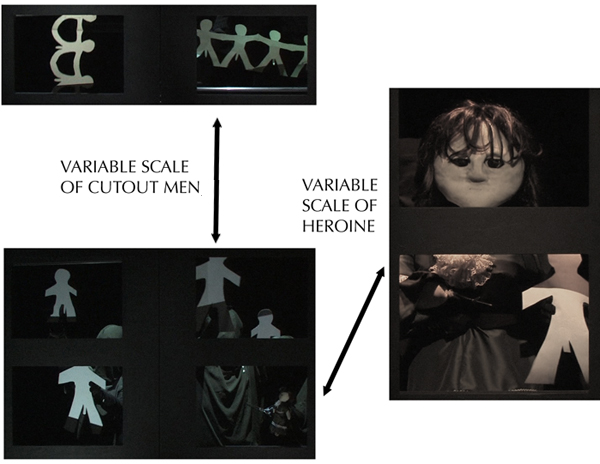 Examine this group of frames. The heroine is represented by multiple puppets, of different sizes. And the cutouts change size as well. The many figures in the scene maintain continuous identities, but their sizes relative to one another keep changing. Size has become Brehm's puppet.

Perspective and size are both qualities of things, and not things themselves. It is difficult to advance the claim that a quality is a puppet. In all plays, things move closer and farther away, changing our perspective and their apparent sizes. True. I would propose that such qualities become puppets when their progressions throughout the play assume independent, thematically coherent narratives of their own. In this regard, Brehm's affinity for Vertigo makes sense. In many ways, the vertical distance between objects is a puppet in the movie Vertigo: It steadily declines from the start of the movie to its middle, and expands from the middle of the movie to its tragic close. Hitchcock tells the story of the movie purely on the formal level of organization of space. Brehm does the same.

I could go on, but I think you get the idea: Everything that crosses the boundary from ordinary life to the universe of Brehm's stage is examined and animated. Animate things on her stage are not characters alone, or objects alone, but the qualities of things as well: space, perspective, light, size, rate.

I have seen and heard tell of people making puppets out of unusual items. But I have neither seen nor heard tell of anyone recognizing quite as Brehm does that the totality of the stage phenomenon is a puppet, that every instant and dram of the stage's innards is a puppet. This approach takes a staggering amount of work, of filling multiple information transmission channels. And inevitably, Brehm's enormous creativity runs far ahead of her technical capabilities. The images in her mind are fully formed; matter lags behind. The production is rough around the edges, even for a work in progress. All great things are.

Why am I so fired up about this puppet show, The Eye Which We Do Not Have? I've considered that a bit. I think it's because I'm excited about how Brehm thinks, about how she allows me to think when I'm in the company of her work. Her universal animation represents a kind of awakening: a sudden sense, after much struggle, of the entire world as active, of all things and qualities as fluid, as engaged in a process of meaningful becoming. We are capable of many transformative insights in life. Some equal this one, but none exceeds it.

Poofs and Stills from The Eye Which We Do Not Have: courtesy of Kate Brehm