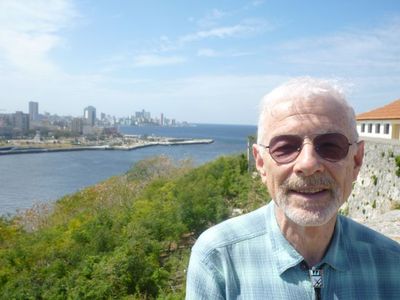 Author Perry Brass in Cuba, Feb. 2016, at the Morro Fortress, during the Havana International Book Fair.

My Facebook page is "no longer available." This means my 2,200 former Facebook friends cannot find out about my books, or what I am doing as a writer, since I use my Facebook page almost entirely for professional reasons. Since February I have been "blocked." Why, I have no idea but it has to do with the books I write being banned "forever" from being advertised or promoted because of their titles and possibly covers--The Manly Art of Seduction and later The Manly Pursuit of Desire and Love, both available on Amazon. The Manly Art of Seduction was an Amazon bestseller, received a Gold Medal IPPY award, is on Audible.com, and in Portuguese, and soon Spanish.

I was told by the faceless "Facebook Team" that The Manly Art of Seduction violated FB's code because of the word "Seduction." I can "never advertise this product" on Facebook (it's a "product," like a condom, not a book) and there is no appeal. Still, hope springs eternal. My follow-up book The Manly Pursuit of Desire and Love, without "Seduction" in its title, might be permissible. It wasn't. I was informed that Desire itself was not allowed in any advertisement of any product on Facebook. Therefore both books were categorized as "banned" products, like vibrators.
This was done by people who hadn't read or researched the books--like Salmon Rushdie's fatwa. Or maybe by computer robots, or in some backroom in India that decided it was not going to allow books of this sort anyplace.

I was in Cuba for 10 days, from Feb 9 - 19, and from there, Facebook is off limits. When I got back, I came down with bronchitis which put me away from Facebook even longer. At the end of February, after receiving "reminders" directing me to log onto friends' updates, I started hitting links that sent me into Mark Zuckerberg's empire.
And got this message.

We removed the content that was posted.
We restrict the display of nudity. Some descriptions of sexual acts may also be removed. These restrictions on the display of both nudity and sexual activity also apply to digitally created content unless the content is posted for educational, humorous or satirical purposes.

So, why were some of my 2,400 Facebook friends' posts being removed? After I tried my own page, I realized I had now been completely blocked from Facebook.

I started Googling what to do and learned that Facebook has recently instituted a policy that it can block anyone without warning. It is enforcing a new series of "global community standards," meaning anyone in any country can complain about your content. So if in Timbuktu someone is offended, you can be blocked by the "Facebook Team."
Also, that A), only Facebook can remove the block, so it's futile to appeal. B) If they do decide to remove it, they will in their own time with no communication with you. And C) the cause of the block will never be known to you.

At this moment Facebook is the world's largest social media organization. For many people it is a major route to "discoverability" for books and other important kinds of arts information.
There is a history of homophobia here--I have seen heterosexual "dating" books openly advertised on Facebook that guarantee success with the opposite sex (meaning women), and that are plainly exploitative. And ads for underwear that make anything I've posted look like stuff from the Daughters of the American Revolution. I know Facebook has a history of harassing gay men, a good example being the Australian magazine DNA which has received numerous warnings for showing barechested guys in Speedos on their covers. Many of my friends have also received warnings from Facebook without showing genitals at all.
I never received any warning, making me feel this might have been pre-emptive. In other words, Facebook simply blocked me before I could do anything.
I've heard that my Facebook page could have been hacked--someone sticking "porn" there when I was in Cuba and unable to do anything. However, again No Warning. So if my page was hacked, then blocked, there was no way for me to know.
People from across the globe have come to me as an openly gay writer in the US through Facebook. Some have read my books on Kindle or other media. I am not a "pornographer," although my work is sexually frank--but not any more frank than any number of commercially available books. The covers of my books often feature barechested men, but thousands of book covers, especially of women's romances, do.
The problem is homophobia on a corporate level, book censorship, and people applying "community standards" that have no place in an open society. But there's something else to understand: Facebook is not a free service.
It is a multi-national corporation making billions off advertising, and the reason for this is the content you provide as a Facebook member. (They can use this content in any way they wish.) You are using your time to provide this content and attention. Facebook is selling that attention. (Or, as Mark Zuckerberg says: "We're going to keep you on the site.")
Even today, blocked, I still get regular "reminders" from Facebook telling me what my friends are doing, and that I need to log in--something I can't do.
Therefore the argument that as a "free" service they have the right to do what they did is spurious, and for them to "pull the plug" on my investment of time with no warning or explanation is reprehensible. It is something you'd expect from a dictatorship.
If you are a Facebook member, please feel free to post the link to this piece on your page. And remember, not only is Big Brother and his employees watching you and judging you, but at any moment he can do to you what he did to me.

Long time poet, playwright, author and activist Perry Brass has published 19 books, and is the author of the bestseller The Manly Art of Seduction, How to Meet, Talk to, and Become Intimate with Anyone and King of Angels, a gay Southern Jewish coming-of-age novel set in Savannah, GA, that was a finalist for a Ferro-Grumley Award. His newest book is The Manly Pursuit of Desire and Love, Your Guide to Life, Happiness, and Emotional and Sexual Fulfillment In a Closed-Down World, recently named an IPPY Silver Medal winner.