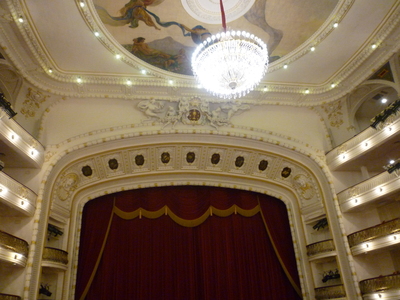 I spent ten days in Havana, Cuba, from February 9, 2016 to February 19, 2016--roughly a month before President Obama made his historic trip. It was my first trip to Cuba, and I kept a close journal of my time there. I also wrote poetry there and I will include some of it in journal entries.

Regarding the Cuban National Ballet at the Gran Teatro Alicia Alonzo:
Our friends Jon and Avril, from the night before, met us, and we met some more visiting Americans, including Toby Horowitz, a Jewish woman from Providence on a Jewish tour of Cuba. She'd "heard of King of Angels. My reading group thought about reading it."

The ballet, a mishmash of excerpts from the Ballet Nacional de Cuba's "Greatest Hits" was disappointing if you judge it by New York, London, or even Chicago, or Miami standards. Often the dancing and corp work was on a student level. But if you realize that the Ballet belongs to the Cuban people, and the highest priced tickets, which foreigners buy, are $40, then it takes on another color. Often the highlights were technical: that the principal dancers could do a difficult routine, or series of steps. The choreography, by Alicia Alonzo, was pedestrian, and that sense of electric energy that I look for in ballet was usually missing, except in a few pieces like a "Grand Polonaise" from "Coppelia," that just shot out of the box, and two fabulous kids doing a pas de deux from "Don Quixote."
Afterwards we went to a nearby, very nice hotel for hot chocolate with Jon and Avril and talked until a little past midnight. We were able to find a "cooperative taxi" very quickly that got us back to Vedado for 5 CUCS, music blaring Cuban music, through an almost deserted Havana except for an area near the Malacon where 1000's of kids were milling about, by the sea wall, or going into nearby clubs that were invisible by daylight. 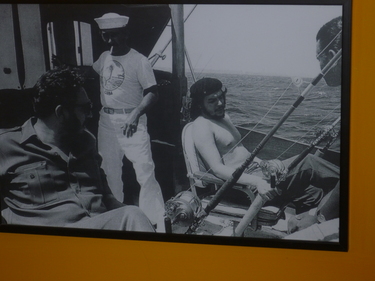 One of the numerous images you see of Che Guevara--often barechested and sexy; I started to refer to him as the "Marilyn Monroe of Cuba."

After a lot of deliberations--and going over our cash finances [necessary, since credit cards are not used in Cuba] we opted for an expensive restaurant in the Plaza San Francisco called the Café Oriental, which on the outside looked extremely old-school Cuban elegant. We made reservations for 3 PM. When we got there, the place was half-empty: it's too expensive for most Cubans [even on this very popular day when most restaurants are totally booked]. Dinner can easily run to $100 for two. We chose carefully from the menu. I had a cup of gazpacho and a gorgeous lamb ragout; Hugh had a "salat verde" and pollo con tarragon, which I thought was not that good. The bread was heavenly--the best we've had in Cuba; they served water from a bottle, gratis. The table had 3 visible layers of table clothing, each place setting had 3 forks and 3 knives in heavy silver plate; plates had a heavy pewter under-plate, or trencher (something basically unknown in the U.S.), and we had two waiters. The bill, with one cocktail each, came to 55 CUCS [basically $55 USD], without dessert.

Afterwards, we went to a concert of Early Music, part of the Havana Early Music Festival, at a very old church that is now on a traffic island near the Malecon, so the noise and pollution around it was awful. Very Cubano, they did not open the church until 6:05 for a 6 o' clock concert; we stayed in line for 30 minutes. The church was small, and quickly packed. A German woman played the recorder, with a harpsichordist from Uruguay who had flaming-red dyed hair. Both women were given huge ovations. They then moved up to the organ loft and did organ duets, further destroying the order of the printed program which the concert had stopped following after the first piece. There were no further announcements, or way of knowing what piece was actually being played.

A note about colors in Cuba: Cuban men like to wear red. It's an emphatic color. And dark, very vivid blue. Gray and black are not worn, except in suits. Those omnipresent yuppies in great, gym shape wearing intimidatingly expensive black casual clothes--so New York--well, you don't see them here.

I am sitting on the balcony of our room, wearing gym shorts, barechested, and barefoot in February. On the street, people are in long sleeved T-shirts or sweaters. It's about 75 F. Ah, Cuba! Sunlight from the East pouring in.

A large group of elementary school kids, with a young male teacher carrying a soccer ball, have just come into view, on their way to school. They are wonderfully behaved, quiet for kids, not bouncing out of line, hitting each other, or bullying--things you see constantly in New York. Cubans love their children and spoil them without indulging them: you see this constant display of affection toward them. Education here is free; there is no hierarchy of competitive private schools, and, I gather, little resentment among kids regarding who doesn't have what. I have rarely felt so safe in a place. 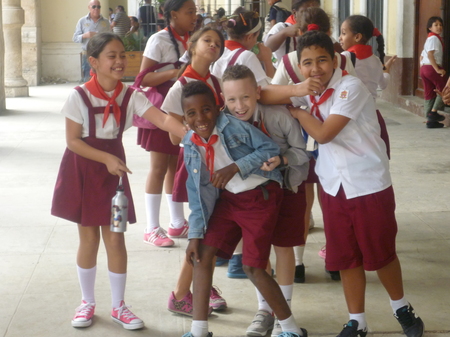 Kids wear a uniform to school, and no one is refused one for lack of funds.

The only incident of hostility I've had here was on the way to the ballet I was elbowed off the sidewalk--it was intentionally done. I knew it. Then the man, a dark, tall guy, hurried on, and didn't elbow anyone else on a crowded way. Maybe he didn't like Americans: an obvious answer. I have tried to let that incident go; there is too much positive here to hold onto.

Multiple award-winning author Perry Brass has published 19 books. His newest is The Manly Pursuit of Desire and Love, Your Guide to Life, Happiness, and Emotional and Sexual Fulfillment in a Closed-Down World which just won a Silver Ippy Medal for Best LGBT Non-Fiction. His thriller novel Carnal Sacraments, A Historical Novel of the Future Set in the Last Quarter of the 21st Century, has just been translated into Italian. He can be reached through his website, www.perrybrass.com.