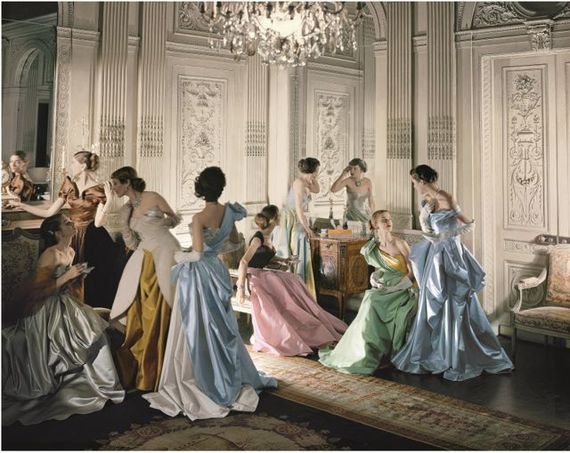 One word immediately came to my mind looking at the head-turning displays of haute couture by the legendary Charles James at the Metropolitan Museum on a recent gorgeous summer Sunday in June: Sick! Not sick as in unwell, miserable, liverish, screwed up, and faint of heart. But Sick! as in something that rams so much effort into such an unexpected end that you are either appalled, disgusted, or impressed to the point of heart palpitations by it.

This show did that to me: it was like being there during the opening season of George Balanchine's silvery, crystalline "Vienna Waltzes," when you are suddenly transported to a world that is so much bigger than you expected it to be, and yet so much more refined, exquisitely felt and proportioned, that you stop being yourself and become something else. This is what art is really all about -- it is, at this dizzying height, a close-to painful experience that delivers everything.

You asked for it. You got it. You couldn't quite believe it, and there it is.

Charles James was born into perfect Anglo-American snobbery in 1906 in Surrey, England, an extremely presentable part of the English countryside; his mother came from a socially prominent Chicago family, his father a British military officer. He was raised by nannies "over there" and brought up to be among the "right sort of people." He ended up in design at the age of 19, when he set himself up in Chicago as a milliner using the name "Boucheron."

Two years later, he set up a fledgling dressmaking business in New York, where one of his first commissions was to design sporting togs for Gertrude Lawrence, the British actress who defined "star" for a generation of PYP's (the Smart Set's "Pretty Young People"), and who was Noel Coward's partner in the original "Private Lives." The high point of his career was in the 1940s and 1950s when he dressed high society and café society, as well as forming alliances with major department stores. James died in 1978, living alone in rooms at the Chelsea Hotel on W. 23rd Street in New York, after several dramatic reversals of fortune -- having in several decades been on the top of the fashion world and then becoming "undiscovered," rejected, and kicked out as fashion grew more commercial, production oriented, and mass-marketed.

The show at the Met is beautifully fleshed out with typed transcripts of some of James's journals, letters, and notes to himself. You get the kind of punch-drunk feeling from these that his part in any movie should have been played by Clifton Webb.

"Cut in dressmaking is like grammar in a language. A good design should be like a well-made sentence, and it should only express one idea."

"In fashion, even what seems most fragile must be built on cement."

"My designs are not luxuries. They represent fashion research."

"Part of what could be called eccentric is my deep involvement in the SHAPE of clothes in movement . . . and conviction that what is distinguished is often a high form of eroticism."
There is a video clip of James at a retrospective showing of his work at the New York nightclub The Electric Circus in 1969: the one thing you get from his presence is that James was not at all effete -- he did not drape himself all over a room like Halston did, and although he was a perfectionist -- driving all that queer testosterone into whiplashing levels of discipline -- he did not suffer from the kind of periodic, drug-infused breakdowns that tormented Yves St. Laurent.

I got the feeling he was very much a man's man who worked in the nose-bleed-high world of very rich, powerful women: his clients. I could go through a real class-laden list of them, but it wouldn't make a difference. Most people would have no idea who they are now, but these women lived in that period, which came to a crash by the end of the 1960s, when simply being a wealthy, socially prominent woman (meaning: being married to a very wealthy powerful man) was a complete job in itself. Just the act of getting dressed in a Charles James "creation" with its acres of fabric, seaming, boning, stitching, scalloping, smocking, faggoting (yes, there is such a word: it's a form of gathered and stitched embroidery), pillowing, and shaping was genuine work. You did not go to college, but to a Finishing School where you learned (goddamn it!) to be charming. The idea you would learn how to balance a checkbook: Never. This was a world best described by Somerset Maugham and later Truman Capote, not Jackie Collins. The only work advisable for such women was charity, which meant learning how to stay beautiful for photographers as you gracefully raised money for the less fortunate.

During his period of being in fashion bloom, James was an exquisite master of this world. One of the things that floored me looking at his work was the way the zippers were set in, always in the back of his dresses (so you needed help getting into and out of them), following all the curves of the body but always deftly concealed. There is a level of craftsmanship here that makes our modern vision of "luxury" look envious. Strangely enough, during James's heyday in the 1940s and 1950s, there was less money among the Gold Coast rich than now -- but it went a lot further. So although James's dresses and coats were not cheap, he enjoyed dressing women like Gypsy Rose Lee, described by the Met as an "entertainer," who came from backstage poverty but could aspire to class.

James jotted down a list of people "I would have liked to have dressed." It's quite formidable. He starts with Gertrude Stein, goes to Princess Margaret Rose (the British Queen's now dead younger sister), and includes Virginia Woolf, Greta Garbo ("Need I say?"), Ava Gardner, Maria Callas, Katherine and Audrey Hepburn, several other of the great opera singers of his day (opera singers -- real divas -- smoked of glamour), and ended up with the boys: Mick Jagger, David Bowie, and Lou Reed. He said about Reed: "Perverse, charming, sings and moves like a poem." About Jagger: "Sexy bastard, can wear and/or make everything and everybody."

Strangely enough, in this list he did not include Jacqueline Kennedy Onassis, or her sister Lee Radziwell; or the English ballerina Margot Fonteyn, one of the most beautiful and elegant women of the 20th century. I wondered, did he ever actually dress them, or did he simply feel that with their own far more subtle mystiques, they would make his fashions look overdone?
It would be easy to compare this show to the Met's spectacularly successful Alexander McQueen show -- and frankly difficult not to. The James show is actually in two galleries in two separate locations (and floors) of the Met. The Met has done a beautiful job using robotic lighting arms and computer monitors that highlight parts of the dresses on display, providing a commentary on these specific parts and how each part either relates to the whole creation or has a separate or purely structural purpose. James was very much a sculptor in fabric. I also felt that the level of architecture he used to make these "machines of elegance" work, to make them actually float with the body, made something like the Verrazano-Narrows Bridge look easy. James did not have the wit, and, simply put, genius of McQueen, which is probably the reason why James lasted longer than McQueen did, who tragically took his own life at the age of 41.

When I went to the McQueen show I had the feeling that McQueen had it in him to be an artist in a much larger field than fashion; he was ruthlessly trapped in the world of style. But I felt about James that he had actually found his real self in fashion and then expanded to fit the larger world that he either discovered through it -- a place filled with artists like Jean Cocteau and Salvador Dali who became his friends -- or he was prepared to take part in because of it. What I think drives people through the James show with a feeling of constant wonder is that there is something unknowable in his work. Mysterious. Enchanting. It is that place where perfect artifice and reality get along beautifully.

Charles James: Beyond Fashion will be at the Metropolitan Museum at 5th Avenue and 82nd Street in New York until August 10, 2014. Hurry. Don't let this one get away.

Perry Brass's latest book is Carnal Sacraments, A Historical Novel of the Future, Second Edition. He has published 17 books, including the ever-popular The Manly Art of Seduction, and can be reached through his website www.perrybrass.com and followed on social media.