This is the weekend of the peak of the annual Perseid meteor shower and most meteor forecasts predict the annual "shooting star" display will be at its best during the overnight hours of late Saturday (Aug. 11) into the early Sunday.

French astronomer, Jérémie Vaubaillon of the The Institut de Mecanique Celeste et de Calcul des Ephemerides (IMCCE) has generated a plot of Earth’s passage through this year’s Perseid meteor swarm. It shows that our planet will be passing through the greatest concentration of dusty material between approximately 0400 hours and 1300 hours UT on Aug 11.

This is perfect timing for North America, as it means that the best viewing for the meteor shower will come during the predawn hours on Sunday. [Spectacular Perseid Meteor Shower Photos]

Over the years I’ve grown accustomed to receiving e-mails from SPACE.com readers who said that they were disappointed with how the Perseid meteor shower performed for them. After all, didn’t most online websites and the mainstream media promise that at their peak the Perseids would produce up to 100 meteors per hour? In most cases, people tend to see far fewer numbers. So why is that?

The number of meteors that you will see will depend on two factors: the time of night observed and sky conditions. An experienced observer in a perfectly clear and dark sky (one in which you can see the faintest stars visible to the unaided eye) with the radiant directly overhead, might theoretically see as many as 100 Perseids per hour. This oft-advertised number is called the shower’s Zenithal Hourly Rate or ZHR.

Such ideal conditions, however, rarely occur in reality. 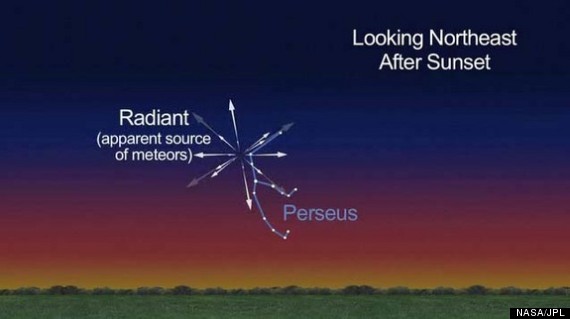 First, let’s take into account the altitude of Perseid radiant (where the meteors will appear to dart from). During the evening hours, the radiant in the Perseus constellation will start off low in the east-northeast sky, but gradually it will climb higher during the night. As a result, the number meteors will correspondingly increase. [Take the Meteor Shower Quiz]

In the table included with this guide, the altitude of the radiant at a particular time (for viewers at latitude 40 degrees north) is given, along with the corrected percentage amount that you’re likely to see.Based on the table, after about 2:30 a.m. you should be seeing at least 80 percent of the predicted ZHR. But there’s another, more important factor to also take into account.

This chart depicts the position (in degrees above the horizon) that the Perseid meteor shower radiant will appear in the northeastern sky in August 2012. Your closed fist held out at arm's length covers 10 degrees of the night sky.

That other factor is light pollution. Unfortunately, very few of us are blessed with perfectly dark, pristine skies. One way to judge how dark your skies are would be to check out the bowl of the Little Dipper.

The brightest star in the bowl is Kochab, which is a second magnitude star on the scale used by astronomers to denote brightness (higher numbers mean dimmer objects, negative number objects are extra bright). The other three stars are 3rd, 4th and 5th magnitude. 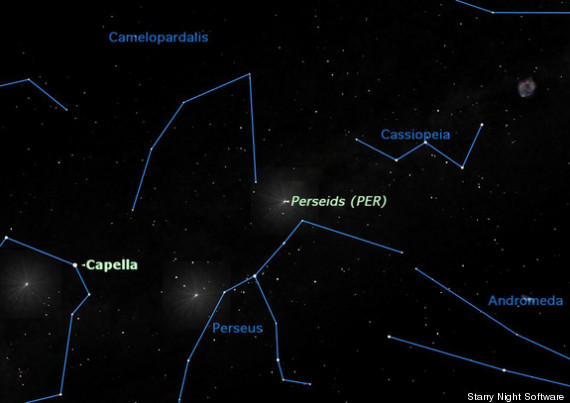 The Perseid meteors appear to radiate from a point between the constellations Perseus and Cassiopeia, in the northeastern section of the sky. The 2012 Perseid meteor shower display peaks on Aug. 12.

For example, let's say you are out looking for the Perseid meteor shower at 4 a.m. on Aug. 12. You can just about make out all four stars in the bowl of the Little Dipper, so you have a 5th magnitude sky; that’s not too bad.

The Perseid radiant stands 60 degrees above the horizon, so you’re expecting to see 100 Perseids per hour, but here’s the reality check: 90 percent of 100 is 90 meteors an hour. But then, factoring in sky conditions based on light pollution, 25 percent of 90 give you just 23.

Many of the Perseids tend to be quite bright, so probably 23 per hour for these specific conditions is a bit conservative, but unless you can get yourself to a truly dark and remote location, your hourly rates are likely to be closer to 23 than 100.

During your meteor watch you might catch sight of a few outstandingly bright meteors. You may even see a fireball that leaves a long enduring vapor trail lasting for many seconds, or a bolide, which is an exploding meteor whose flight across the sky ends with a silent, strobe-like flash capable of casting a shadow.

Just seeing one of these kinds of meteors can make your whole night worthwhile.

So remember this if you’re out late Saturday night or early Sunday morning looking for Perseids: It’s quality, not necessarily quantity.

Editor's note: If you snap an amazing photo of the 2012 Perseid meteor shower that you'd like to share for a possible story or image gallery, send images and comments (including name and location) to managing editor Tariq Malik at tmalik@space.com.

Advertisement
Copyright 2012 SPACE.com, a TechMediaNetwork company. All rights reserved. This material may not be published, broadcast, rewritten or redistributed.