I buried my mother today. She had reached the end of her long and productive life, and while her last act was not as she would have chosen to play it, the scenes were, in perspective, relatively brief if emotionally difficult. She is now at peace, lying with my father, and the world goes on. As does the work of the world. 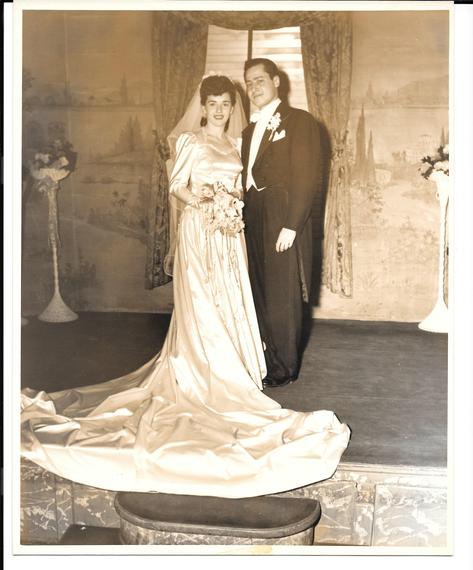 I've been listening to '40s music -- swing and jazz and wartime favorites -- to commune with my parents. They were the oldies of my youth, which I memorized while piously publicly rejecting them for folk and rock. Those were the years of intergenerational conflict, the combatants on either side of the chasm that was age 30. Strange as it may seem today when the postwar parents and their children get along pretty well (they'd better, since a very sizable plurality are being forced by economic reality to once again reside together), but those years of conflict, from which sprang forth the great social justice movements of the 20th century, left buried lessons we were too proud to learn. The music reminds me that there's still time.

I find the wartime ballads heart wrenching, never having known such fear of losing so many loved ones in war, or even the real possibility of losing one's country. Watching The Man in the High Castle, I'm reminded how close we came to losing it all. Yet my family, with my father a marksman in the army and his older brother in Patton's Third Army, dropped everything to fight for their country. My father and uncle, despite being Jewish, and their fellow GIs, despite being African or Native American, or Italian or Irish or Slavic, joined together in spite of their oppression in America, because there was a more important battle being fought. It was against a greater form of evil, a mechanized, institutionalized, aggressive bigotry the likes most of them never knew in this country. And because of their willingness to fight, we have the freedom to pursue the fight against bigotry in this country.

There is much work to do. Trump, Cruz and Carson are fascist clowns, but it was a group of such fascist clowns in Weimar Germany with the charisma and followers for the movement they needed to grow that nearly converted the entire world into one giant slave state. We have Christian terrorists in this country attacking churches and clinics to go along with Islamic terrorists in Paris, Mali and Kenya, and Jewish terrorists in the occupied territories. We have persistent institutionalized racism and sexism here at home, bigotry that is finally being called out. Now that my parents are gone I'm especially happy to see that the social idealism of my generation is finally resurfacing with our children.

My mother did what was expected of her as a woman born in 1928. She, however, exceeded those expectations. She attended the best schools, including college and grad school, in spite of coming from a culture which generally denied its girls the opportunity. She raised a family because it was important and expected, but she also did the superwoman thing and had a very successful career. Whenever I see the Notorious RBG, I think of my mother, both grown from the same fertile soil, and willing to force change when needed.

In spite of the conventional wisdom that older folks cannot evolve and adapt, I've learned that they can. I demanded great effort over the past fifteen years from my parents, who had denied my reality for the previous forty. I'm writing this by the pool of the hotel in Delray Beach where I encamped the night before I first presented their daughter to them. I stayed at the hotel out of fear of rejection and the need for a place of refuge. Turns out I didn't need it. I was able to care for my mother in her dying days without ever being misgendered, a remarkable fact given the depth of her dementia. And now I lie here reading a review of The Danish Girl in The New Yorker just 13 years later. Remarkable!

Anything is possible. It just takes time. Let's take less offense for the micro insults, accept that changing people takes longer than changing laws, and be grateful we have the opportunity and tools to fight today's bigots because of the efforts of those who came before us.