What helps us mark an event or transition to a new place? Graduations, wedding ceremonies, and promotions come to mind. But personal rituals such as lighting candles, reciting prayers, spreading ashes out into the ocean, planting a tree -- these can be just as moving. In fact, the rituals that involve planning and actively doing something are often more meaningful, and a symbolic act can serve as a vehicle of transcendence. I'd like to share one such act that I consider to have been instrumental in my own personal growth. Before I do that, you would need to know my dad.

You can't meet him now because he died of alcohol abuse at the age of 51. Having surpassed this age myself, I think about how much of life he still had to live. He missed seeing all of his children's marriages and holding his grandchildren. He missed retiring from work, traveling, and playing cribbage with his friends on Saturday nights. He missed his beloved Red Sox breaking the Curse of the Bambino. Sometimes when I read about developments in the treatment of alcoholism, I feel a deep sadness that those treatments were not available in his lifetime. Someday there will be a cure, and like so many people who have lost loved ones to an incurable illness, there will be a bittersweet response to this news. If only ... 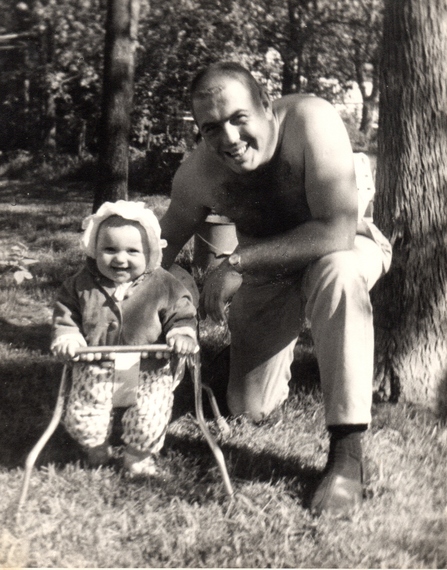 Me and my dad in happier times

Despite his alcohol problem, my dad had many wonderful qualities. He was proud of his children, attending award banquets and cheering at my brother's basketball games -- oftentimes drunk. He was proud of his country and wore his Marine Corps uniform in town parades, became misty-eyed singing the National Anthem at ballgames, and saluted all veterans.

He drove a truck for a sanitation company for his entire career -- simply put, he was a garbage man. He started with emptying garbage cans into the back of the truck, later worked his way up to being a driver, and ended his career demoted back to "being on the back of the truck" given his advancing alcoholism and inability to drive sober. In the 30 years he did this work, he often came home from work with darkened, dirty hands, and I shuddered at the thought of what composed that matter under his fingernails.

I deeply loved my father. He was a man of few words. I can picture him sitting on our back porch reading the Boston Herald. A transistor radio would've been propped up against the window screen next to him, the tinny sounds of the Red Sox games being broadcast. An ashtray heaped with rubbed-out Pall Malls within reach, along with his beloved Schlitz. I have no doubt that if he were alive today, he would be sporting the "Make America Great Again" cap. He was a good man; I knew that deep down in my soul. But we couldn't have been any more different.

His final years were hard on him, and all of us too. He was hospitalized a couple of times, each time being given the warning that if he continued to drink, he wouldn't live much longer. I knew that was really a warning to us that the end was near because at that point, my father did not have the ability to overcome his odds.

My best memory of that time period was when I went to visit him in the hospital and brought with me a basket of items that I was going to use to clean his fingers. Amazing as it may seem, even in the hospital, having been cleaned and sanitized as much as possible, my father's fingers were still stained yellow from his Pall Malls, and under his fingernails there was still a layer of blackness that defied classification.

"Hey dad, let me clean those fingernails for you. Doesn't look like the staff here got to them."

He smiled blankly at me. He knew who I was, but his ability to form coherent thoughts was impaired, a manifestation of Korsakoff's syndrome which is a common form of dementia in late-stage alcohol abuse.

I sat down next to him and arranged my tools -- a bowl, some bleach, a toothbrush, a nail clipper, towel, and lotion. He watched me in silence with an almost childlike bewilderment. I filled a small bowl with water, added a splash of bleach, and slowly lowered his hand into the warm water. I worked quietly, kneading his fingers in the water, then drying gently. I used a pick to scrape out the dirt and accumulated humus, alternating between soaks and scrapes. When I was finished with cleaning both hands, I used lotion to moisturize the calloused remains of them.

When I left his hospital room that day, watching him look at his clean hands, I felt something very powerful. The symbolic act of cleansing my father's hands was, in a very significant way, my final gift to him -- a way of absolving him of his many transgressions. It continues to be a powerful memory to me, and when I am missing him, I think about his hands that day and feel comforted. Not only were we cleansing, but we were holding hands. Human touch is one of the most powerful forces of nature.

I share this with you because if you have someone or something that you need to bring to closure, then consider a symbolic act that has meaning for you. Think of ways to complete an act that helps you put something in its proper place, whether it be an apology, a forgiveness, a letting go, or a change. Let your imagination be your guide in what may feel right -- the more personal, the better. Rituals do not have to be grand ceremonies or public acts; many times a personal gesture is the most meaningful. The results can move obstacles in your path to resolution and freedom.

If you have a personal ritual you'd like to share, I would love to hear about it! You can reach me at drpatblumenthal@gmail.com