LONDON -- A Japanese robot maker says he's designed a personal robot that could be the "next smartphone."

“You will put him in your pocket and talk to him like your own Jiminy Cricket,” Tomotaka Takahashi, CEO of robot design company Robo Garage and research associate professor at the University of Tokyo, told The WorldPost recently at The WorldPost Future of Work Conference. He said he's aiming to have the pocket robot, which is still just a prototype, hit the market in a year. He has not shown the prototype to anyone publicly.

Takahashi says the pocket robot has a head and limbs, is able to walk and dance, and expresses “emotions” through gestures and color-changing eyes. In these ways, the pocket robot is similar to "Robi," a larger robot also created by Takahashi that's been on sale since 2012. (You can see Robi in the video above.)

The biggest difference is that the pocket robot, which doesn’t have a name yet, would be connected to the Internet. By collecting data about your online and offline behavior, your pocket robot would "get to know you." In fact, its personality would change based on your personality, Takahashi said.

“Smartphones are hitting a wall,” he said. There’s only so much a person can do while looking at a screen, he went on, and smartphone voice recognition is not widely used. “We can talk to pets -- even fish or turtles -- but not to square boxes or screens."

Takahashi believes that it won't be enough for our next device to be intelligent -- it will also need to be lifelike. It’s why he thinks “wearable tech,” like Google Glass or the much-vaunted Apple Watch, won’t catch on.

“We can talk to pets -- even fish or turtles -- but not to square boxes or screens.”

Before creating Robi, Takahashi built a small robot that climbed a cliff of the Grand Canyon. But he said that because physical tasks are the most difficult for robots to perform, he's now focused on improving human-to-robot communication. In this vein, one of his robots, Kirobo, was sent to the International Space Station in 2013 as a part of an experiment to see if the robot could adequately keep a human astronaut company. Kirobo flew back to Earth in February, and an assessment of its performance will take place later this month.

Takahashi predicts that in 10 years, most people will be carrying around a small robot instead of a smartphone. As evidence, he points to the widespread use of social media. People are social creatures, and we like to share our experiences and thoughts. It’s why we tweet and post photos on Facebook. The next step, Takahashi believes, will be socializing directly with your robot.

For example, instead of sharing a stunning photo on Instagram or your thoughts on an interesting movie on Twitter, you could talk about it with your robot in the moment. Not only that, but your robot would remember the shared experience, years later. Your relationship with your robot would be strengthened over time by the memories that you share together, Takahashi said.

“It’s similar to men and women,” he said. “First you have an interest in each other. Then communication goes well. Then there’s reliability, and then you’re sharing many experiences in the same time and same place. It’s what old couples have together.”

Your relationship with your robot would be strengthened over time by the memories that you share together, Takahashi said.

But he doesn’t think humans will try to make small robots into their romantic partners -- “just close friends.” And like an old friend who’s irreplaceable, you won’t have to replace your pocket robot when a newer model comes out -- you’ll simply have the option of moving his “identity symbol parts” into new hardware, Takahashi said.

In addition to experiences, you could also share thoughts and feelings with your robot. “Right now, we can talk to our phone to ask for our schedule or send an email, but that’s more of a direction,” said Takahashi. “When we have small robots, we’ll say things to it like ‘Today’s cold’ or ‘I’m sad’ -- things more related to our fundamental emotions. He doesn’t have to say something very useful back. Just respond like a human would.”

You could use your pocket robot for lots of other things too. If you tell your robot you’re hungry, it could remind you when you last ate, or tell you that around the corner, there’s a sushi place (which your robot would know is your favorite type of food). Your robot could also help you better connect with humans, Takahashi said. For example, if you're about to meet a new co-worker, your robot could -- after scanning the Internet or that person’s robot -- tell you that the new co-worker shares a hobby with you.

And there’s great commercial potential. The more information a device collects, the more lucrative it is. Your shopping recommendations on Amazon would be spot on, Takahashi said.

It's unclear whether Takahashi can actually perfect a pocket robot capable of everything he describes. Past robots touted as lifelike and emotionally intelligent haven't quite pulled it off. And while there's a market for personal robots in Japan, it's far from certain whether the demand exists elsewhere. Also, of course, privacy concerns are inevitable. (Takahashi says the security on the pocket robot will be similar to that of a smartphone.)

Julie Ask, principal analyst at the technology research firm Forrester, said she doesn't think Takahashi’s pocket robot will replace the smartphone. However, she said, a robot could serve as an appealing extension of someone's phone. That’s the thinking behind the Apple Watch, which relays data about its user’s behavior to the user’s iPhone. Ask told The WorldPost that she thinks there may not be a large demand for pocket robots outside of Asia, but she added that certain niche markets might want one, like people who struggle to connect with others. Most people, she said, will probably continue to focus on communicating with other humans rather than with a robot.

"Much of what most of us do on our phone is communicate with others, often on social media, which is very different than a one-on-one relationship," Ask said. "It’s very much about sharing with the world.”

Your robot’s personality will change based on your personality, Takahashi said.

Still, Takahashi believes that personal robots are going to play an increasing role in people's day-to-day lives. He argues that people are growing tired of virtual communication and are now missing real communication and physicality. That’s why, he said, we’re now seeing lots of hardware startups, including 3-D printing applications. He said that he’s working with a "well-known company" to mass-produce his pocket robot, but he's not saying which one until their joint public announcement. The pocket robot will be the size of an iPhone 6, have a similar battery life and cost about $2,000, he said.

Unsurprisingly, Takahashi is not alone in his race to release a personal robot. Other products that are either currently available or slated for release in 2015 or 2016 include Pepper, Jibo, Robotbase, Furo and Romo. However, none of these are pocket-sized, none appear to be intended for round-the-clock, always-with-you use and none seem likely to replace the smartphone.

And as Takahashi sees it, a large part of a personal robot's value would come from being with you all the time.

“We will rely on our personal robot in the future,” Takahashi said, “because he will know you better than anyone.”

Takahashi’s comments have been edited for clarity. 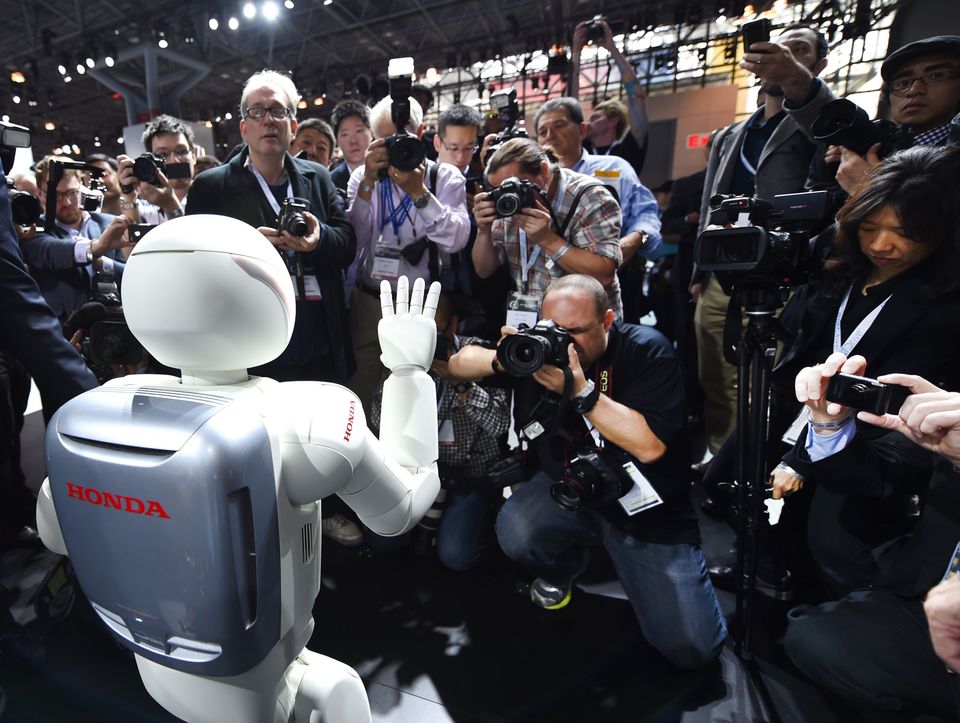 1 / 14
ASIMO The Robot
Revealed in 2000, ASIMO was designed to be a mobile assistant and to eventually help people who lack full mobility. Honda North America shows off their new Asimo Robot to the media during the second press preview day at the 2014 New York International Auto Show April 17, 2014 in New York at the Jacob Javits Center. AFP PHOTO / Timothy A. CLARY (Photo credit should read TIMOTHY A. CLARY/AFP/Getty Images)
TIMOTHY A. CLARY via Getty Images