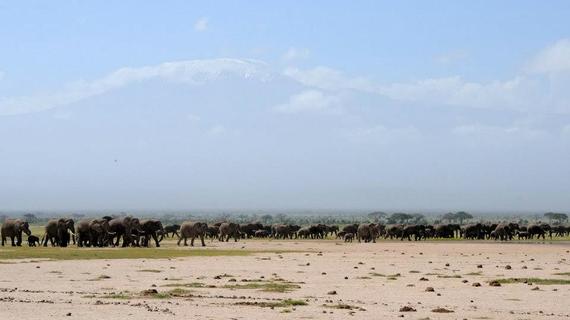 We are watching "elephants," true enough. But I realize, embarrassed, that I know nothing of how these beings live, of who they are. I scarcely know what it means to be "watching elephants."
Cynthia Moss knows, because she's been here, watching, for forty years--more time than any other human has ever watched elephants. "When you look any animals around here--lions, zebras, elephants," Cynthia offers, "you're seeing just two flat dimensions. But once you know them individually--their personalities, who their mother was, who their kids are--you see added dimensions."

One elephant in a family, she explains, might seem regal, dignified. Another will seem shy, perhaps gentle. Another a bully who will be pushy to get food in sparse times. Another as "flamboyantly playful."

I watch the elephants. Their rumbles roll through the air like approaching thunder, rallying families and friends from the hills and rivers, sending among themselves greetings and recognitions and news of where they have been.

"The realization of how complex they are took me about twenty years," Cynthia continues. "While we were following Echo's family--she was about forty-five years old at the time--I saw that Enid was incredibly loyal to her, Eliot was the playful one, Eudora was flaky, Edwina was unpopular, and so on. And slowly I realized that I'd begun knowing what would happen next. I was taking my cues from Echo herself. I was understanding her leadership--as her family was understanding it! It made me realize how totally super aware they are of what we're doing."

Super aware? They seem oblivious to our presence. 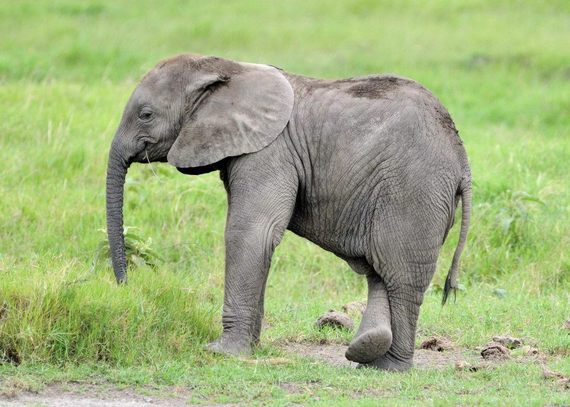 Does this baby elephant notice us? Credit: Carl Safina

"Elephants don't seem aware of details," Cynthia explains, "until something familiar changes."
One day a cameraman decided that he'd position himself underneath the vehicle for a different angle. The oncoming elephants, who usually just passed that familiar research vehicle, immediately stopped and stared. Why was a human under the car? A male named Mr. Nick snaked his sniffing trunk under there to investigate. He was not aggressive, just curious. Another day, when the vehicle appeared with a special door for filming, elephants touched the new door with their trunks.

In the late 1960s, a few years before Cynthia Moss arrived in Kenya, another pioneer, Iain Douglas-Hamilton, first realized that the basic unit of elephant society is a family composed of an older female, her sisters, their adult daughters, and all their children. The family is the foundation for shared infant care and child rearing. Usually the oldest, the "matriarch," decides where the family will go, and when. She's the family's main holder of living history and knowledge. And her personality--whether calm, nervous, indecisive, or bold--sets the whole family's tone.

Forty years later, Iain recalled the extraordinary impression this made on him--at a time when everyone had assumed that males led everything in the world. "When I first realized that elephants were organized by families headed by a matriarch," Iain told me, "I saw in them an undaunted female intelligence." 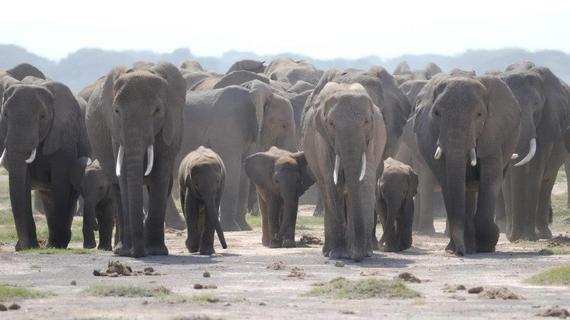 In droughts when food gets scarce, a family's size can affect its dominance, thus access to food and water and how well its members survive. Again personality matters. The matriarch Slit Ear was so aggressive toward other families on behalf of her own that Cynthia Moss remembers her as, "a real bitch. But--spirited!"

We usually see "elephants"--or "wolves" or "killer whales" or "chimps" or "ravens" and so on--as interchangeable representatives of their kind. But the instant we focus on individuals, we see an elephant named Echo with exceptional leadership qualities; we see wolf 755 struggling to survive the death of his mate and exile from his family; we see a lost and lonely killer whale named Luna who is humorous and stunningly gentle. We see individuality. It's a fact of life. And it runs deep. Very deep.

Individuality is the frontier of understanding non-human animals. But for decades, the idea was forbidden territory. Scientists who stepped out of bounds faced withering scorn from colleagues. Jane Goodall experienced just that. After her first studies of chimpanzees, she enrolled as a doctoral student at Cambridge. There, as she later recalled in National Geographic, "It was a bit shocking to be told I'd done everything wrong. Everything. I shouldn't have given them names. I couldn't talk about their personalities, their minds or their feelings." The orthodoxy was: those qualities are unique to humans.

But these decades later we are realizing that Goodall was right; humans are not unique in having personalities, minds and feelings. And if she'd given the chimpanzees numbers instead of names?--their individual personalities would still have shined.

"If ever there was a perfect wolf," says Yellowstone biologist Rick McIntyre, "It was Twenty-one. He was like a fictional character. But real." Like Cynthia Moss watching elephants, McIntyre has watched free-living wolves for more hours than anyone, ever. 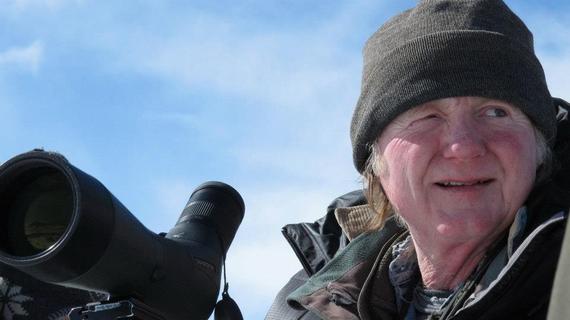 Even from a distance Twenty-one's big-shouldered profile was recognizable. Utterly fearless in defense of his family, Twenty-one had the size, strength, and agility to win against overwhelming odds. "On two occasions, I saw Twenty-one take on six attacking wolves--and rout them all," Rick says. "Watching him felt like seeing something that looked supernatural. Like watching a Bruce Lee movie. I'd be thinking, 'A wolf can't do what I am watching this wolf do.'" Watching Twenty-one, Rick elaborates, "was like watching Muhammad Ali or Michael Jordan--a one-of-a-kind talent outside of 'normal.'"

Twenty-one was a superwolf. Uniquely, he never lost a fight and he never killed any defeated opponent. And yet Twenty-one was "remarkably gentle" with the members of his pack. Immediately after making a kill he would often walk away and nap, allowing family members who'd had nothing to do with the hunt eat their fill.

One of Twenty-one's favorite things was to wrestle little pups. "And what he really loved to do," Rick adds, "was pretend to lose. He just got a huge kick out of it." Here was this great big male wolf. And he'd let some little wolf jump on him and bite his fur. "He'd just fall on his back with his paws in the air," Rick half-mimes. "And the triumphant-looking little one would be standing over him with his tail wagging.

"The ability to pretend," Rick adds, "shows that you understand how your actions are perceived by others. I'm sure the pups knew what was going on, but it was a way for them to learn how it feels to conquer something much bigger than you. And that kind of confidence is what wolves need every day of their hunting lives."

In Twenty-one's life, there was a particular male, a sort of roving Casanova, a continual annoyance. He was strikingly good-looking, had a big personality, and was always doing something interesting. "The best single word is 'charisma,'" says Rick. "Female wolves were happy to mate with him. People absolutely loved him. Women would take one look at him--they didn't want you to say anything bad about him. His irresponsibility and infidelity; it didn't matter." 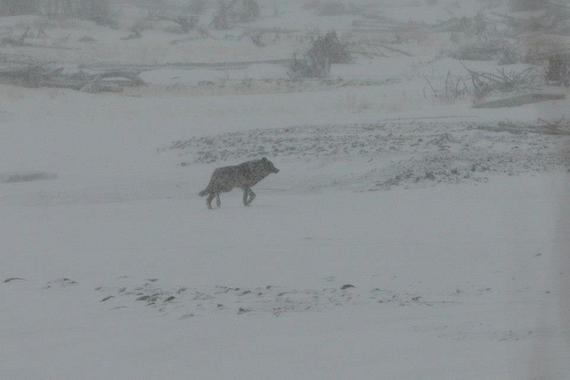 One day, Twenty-one discovered this Casanova among his daughters. Twenty-one ran in, caught him, biting and pinning him to the ground. Other pack members piled in, beating Casanova up. "Casanova was also big," Rick says, "but he was a bad fighter." Now he was totally overwhelmed; the pack was finally killing him.

"Suddenly Twenty-one steps back. Everything stops. The pack members are looking at Twenty-one as if saying, 'Why has Dad stopped?'" The Casanova wolf jumped up and--as always--ran away.

After Twenty-one's death, Casanova briefly became the Druid pack's alpha male. But, Rick recalled: "He doesn't know what to do, just not a leader personality." And although it's very rare, his year-younger brother deposed him. "His brother had a much more natural alpha personality." Casanova didn't mind; it meant he was free to wander and meet other females. Eventually Casanova and several young Druid males met some females and they all formed the Blacktail pack. "With them," Rick remembers, "he finally became the model of a responsible alpha male and a great father."

Similar to elephants, the personality of a wolf 'matriarch' also helps shape the whole pack. Wolf Seven was the dominant female in her pack. But you could watch Seven for days and say, 'I think she's in charge,' because she led subtly, by example. Wolf Forty, totally different; she led with an iron fist. Exceptionally aggressive, Forty had done something unheard of: actually deposed her own mother.

For three years, Forty ruled the Druid pack tyrannically. A pack member who stared a moment too long would find herself slammed to the ground, Forty's bared canines poised above her neck. Yellowstone research director Doug Smith recalls, "Throughout her life she was fiercely committed to always having the upper hand, far more so than any other wolf we've observed."
Forty heaped her worst abuse on her same-age sister. Because this sister lived under Forty's brutal oppression, she earned the name Cinderella.

One year Cinderella split from the main pack and dug a den to give birth. Shortly after she finished the den, her sister arrived and delivered one of her infamous beatings. Cinderella just took it, as always. No one ever saw any pups at that den.

The next year, Cinderella, Forty, and a low-ranking sister all gave birth in dens dug several miles apart. New wolf mothers nurse and guard constantly; they rely on pack members for food. That year, few pack members visited the bad-tempered alpha. Cinderella, though, found herself well assisted at her den by several sisters.

Six weeks after giving birth, Cinderella and several attending pack members headed out, away from her den--and stumbled into the queen herself. Forty immediately attacked Cinderella with was, even for her, exceptional ferocity. She then turned her fury onto another of her sisters who'd been accompanying Cinderella, giving her a beating too. Then as dusk settled in, Forty headed toward Cinderella's den. Only the wolves saw what happened next, but Doug Smith and Rick McIntyre pieced together what went down.

Unlike the previous year, this time Cinderella wasn't about to remain passive or let her sister reach her den and her six-week-old pups. Near the den a fight erupted. There were at least four wolves, and Forty had earned no allies among them. 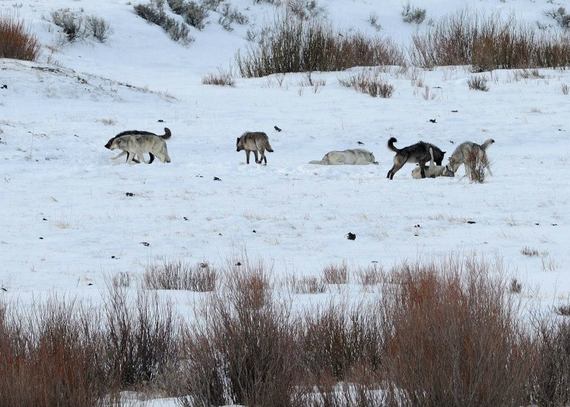 At dawn, Forty was down by the road covered in blood, and her wounds included a neck bite so bad that her spine was visible. Her long-suffering sisters had, in effect, cut her throat. She died. It was the only time researchers have ever known a pack to kill its own alpha. Forty was an extraordinarily abusive individual. The sisters' decision, outside the box of wolf norms, was: mutiny. Remarkable.

But Cinderella was just getting started. She adopted her dead sister's entire brood. And she also welcomed her low-ranking sister and her pups. And so that was the summer that the Druid Peak pack raised an unheard-of twenty-one wolf pups together in a single den.
Out from under Forty's brutal reign, Cinderella developed into the pack's finest hunter. She later went on to become the benevolent matriarch of the Geode Creek pack. Goes to show: a wolf, as many a human, may have talents and abilities that wither or flower depending on which way their luck breaks.

"Cinderella was the finest kind of alpha female," Rick McIntyre says. "Cooperative, returning favors by sharing with the other adult females, inviting her sister to bring her pups together with her own while also raising her vanquished sister's pups--. She set a policy of acceptance and cohesion." She was, Rick says, "perfect for helping everyone get along really well."

This piece is adapted from Carl Safina's most recent book, Beyond Words; What Animals Think and Feel, which will is newly out in paperback.