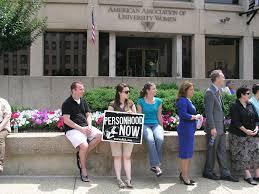 A recent report by the Guttmacher Institute took a new look at an old game being played -- anew -- by anti-abortion, anti-women forces. It is called the Personhood Game. If anti-women forces win, a fertilized egg becomes accepted as a person. Which means that every fertilized egg is accorded rights above those of the woman in whose body it is housed -- fine for eggs, but pretty dismal for women.

Not a lot of rational people, including rational people who vote, think it makes sense for eggs to be deemed persons. This was made clear last year by the failure of such bills in several state legislatures. Not to be dismayed, players of the Personhood Game have simply switched their energies to fighting contraception. The more contraception bans succeed, the stronger the eventual case for declaring fertilized eggs sacrosanct. Why? Because contraception bans are based on religious doctrines that hold such a view. Though keeping their distance on personhood politics for now, anti-abortion groups including Americans United for Life, the Heritage Foundation, Susan B. Anthony List and the U.S. Conference of Catholic Bishops are among those working hard and widely to ban access to contraception.

Is there a disconnect here? Since effective contraception lessens the number of unwanted pregnancies, and thus the number of abortions? Well, yes. But the people playing the Personhood Game simply have their eye on the prize: Fertilized egg wins, woman loses.

Writer/blogger Joanne Valentine Simson, who is credentialed in both science and poetry, has posted a number of thoughtful and informative essays on contraception. Simson points out three critical factors seldom considered in all the arguments for and against contraception: women's physical wellbeing, women's social wellbeing and overall environmental impact. "These are larger issues about long-term human survival," Simson writes, "(than) the false debate about whether a cell (or cluster of cells with 46 chromosomes) is a human being." To conflate contraception with abortion simply bypasses every one of them.

But the Personhood Game players are as adept at bypassing reality as they are at steering the debate.

have compartmentalized the debate, which allows them to pick and choose when contraception should be viewed as abortion and when it should not. They are essentially able to pursue a 'personhood' argument in areas where doing so is politically feasible, but at the same time feign moderation by keeping the full-fledged, politically toxic 'personhood' agenda at arm's length. This deception is part of a deliberate, long-term strategy to limit women's access not only to safe and legal abortion, but to common methods of contraception as well.

If this seems devious, and underhanded -- well, it is. But it's the way the game is being played.

For women -- who are both pawns and victims -- it is a dangerous game.