Secretary Clinton has a great deal of interest in technology and how it can drive engagement around the world. Kicking off 2010 with a two-hour discussion with technology leaders about 21st-century statecraft shows that she is serious about this. 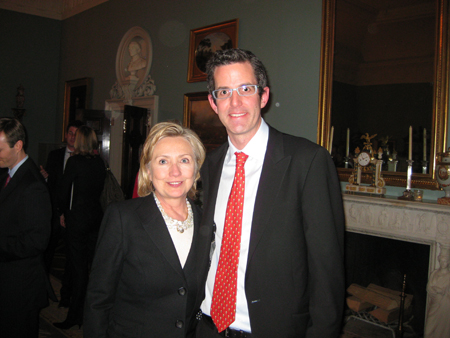 She realizes that if U.S. diplomatic policy is going to encourage civil society development, and fight violence and oppression, 21st-century tools like Twitter, Google, and YouTube are going to be key. It's all part of her 21st-century statecraft strategy: harnessing the power of technology tools to promote diplomacy around the globe. Yesterday, Senator Lugar wrote a great piece on these efforts.

At dinner, we discussed how to harness technology for diplomatic and development goals. She went around the room asking everyone for concrete ideas. This brainstorming session with active participation from the group resulted in some great ideas, which included:

1. Finding ways to incent global citizens to build applications that can advance these goals

3. Building better public-private partnerships and making it easier for start-ups that have great ideas to be able to present them more effectively to the U.S. government

5. Discovering ways to train people -- especially those who are new to the online world -- how to use all these tools effectively

Jack Dorsey, James Eberhard, and I told her first hand about our experience on our recent tech delegation trips to Iraq and Mexico, which she was very excited about. We also spoke about the success and momentum of the Alliance of Youth Movements, a nonprofit organization I helped start which is looking to advance grassroots movements seeking positive social change using the tools of 21st-century technology.

As a result of the dinner, Secretary Clinton declared in an e-mail to her staff: "We are using all tools at our disposal to practice 21st-Century Statecraft...harnessing the power of technology."

I was impressed with Secretary Clinton's engagement in the discussion and her genuine excitement to not only learn, but also make sure we act. From organizing a technology delegation to Iraq last April to sending Google CEO Eric Schmidt to Baghdad last month and hosting this dinner discussion, it's clear that the U.S. State Department is strongly supporting and encouraging digital diplomacy. By working with government and private-sector leaders, we're all banding together to figure out the most effective means to leverage digital technology tools to promote diplomacy around the world.

CEO and co-founder <a href="http://www.howcast.com/">Howcast</a>, co-founder of Alliance of Youth Movements