Yes, millennials are moving to the urban cores. No, not in significant numbers in the context of larger city (metropolitan area) trends. This is according to the latest data from the American Community Survey 2009 to 2013 file, which approximates the situation in the average year, 2011.

Small area trends are important to understanding developments in the urban cores, because conventional municipal jurisdiction-based analysis is clouded by the effect of large suburban areas that constitute most of the core municipality population. In 2010, nearly 60 percent of the population in historical core municipalities in major metropolitan areas (over 1,000,0000 population) lived in small areas that were functionally suburban or exurban.

This analysis uses my City Sector Model, which classifies small areas (ZIP codes, or more formally, ZIP Code Tabulation Areas, or ZCTAs) in metropolitan area using employment densities, population densities and commute modes (Figure 1). All small areas are classified as urban core, suburban or exurban. The purpose of the urban core sectors is to replicate, to the best extent possible, the urban form as it existed before World War II, when urban densities were much higher and when a far larger percentage of urban travel was on transit. The replication of urban cores is a especially appropriate because the objective of much urban planning is to re-establish patterns similar to those of the pre-War era. The suburban and exurban sectors replicate the automobile oriented suburbanization that began in the 1920s, was slowed by the Great Depression and resumed unabated after World War II. 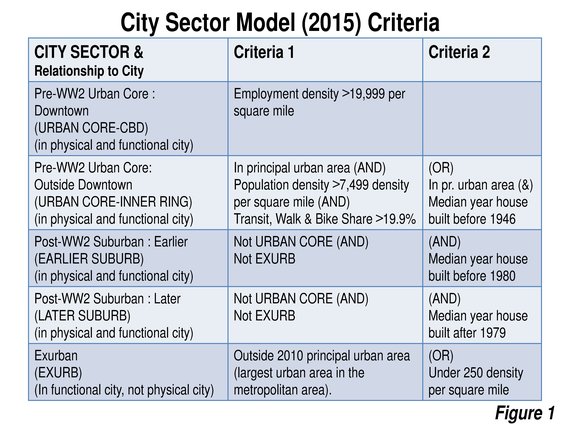 The new data reinforces the reality that there are two sides to the story of millennials in the urban core. This analysis compares population data for younger adults in the age range of 20 to 29 years old, which represented much of the millennial population in 2011.

There are many reports about how younger adults have been attracted to the urban core. For example, media organizations like The New York Times and the Los Angeles Times can readily send their reporters to nearby downtown establishments like Starbuck's for to collect the anecdotes. But most people are not downtown and, indeed, the average Starbucks may be as likely to be in a suburban strip mall.

However, anecdotes are unreliable for accurately discerning trends, whether from self selected groups or from one's own circle of friends. Genuine trend analysis requires representative data, which is what censuses and census surveys provide.

Millennials are a larger share of the total population in the downtown or Central Business District (CBD) than elsewhere in the city. In 2011, millennials represented 24.4% of the CBD population. By comparison, millennials are a much smaller 14.1% of the overall metropolitan population. Millennials have their smallest share in the exurbs, at 12.1%, less than one half that of the CBD. The balance of the urban core, the inner ring, has the second highest millennial component, at 18.1% (Figure 1). 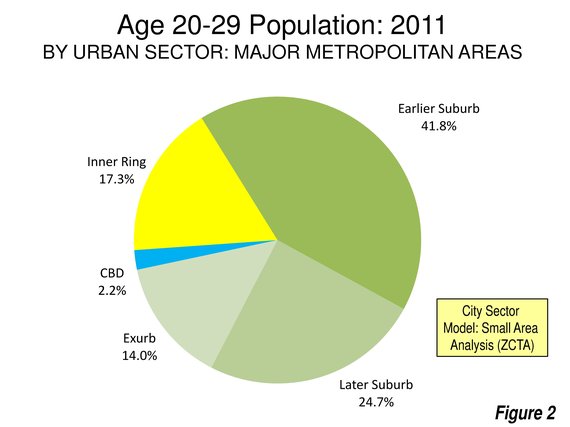 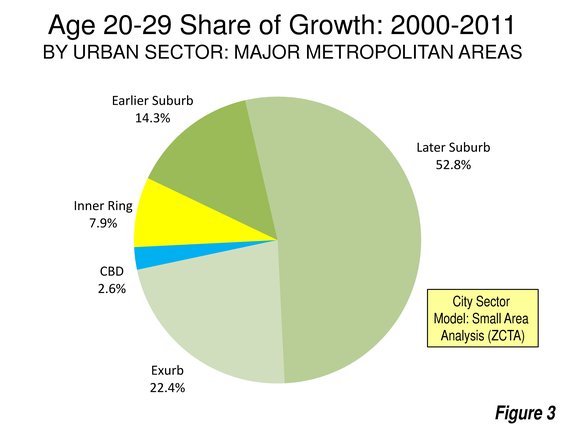 A Matter of Perspective

There is a silver lining to both sides of the debate. For those who judge cities by their cores, the millennial presence is encouraging and playing an important role in the resurgence of areas that had been in decline for so long. For those who evaluate cities by their overall trends, the numbers and the growth rate among 20-29 year olds are dominant and offer similar encouragement.

The reality is that urban cores, the suburbs and exurbs can all prosper at the same time. It is not a zero-sum game.

Note: Adapted from an article by the author in newgeography.com.