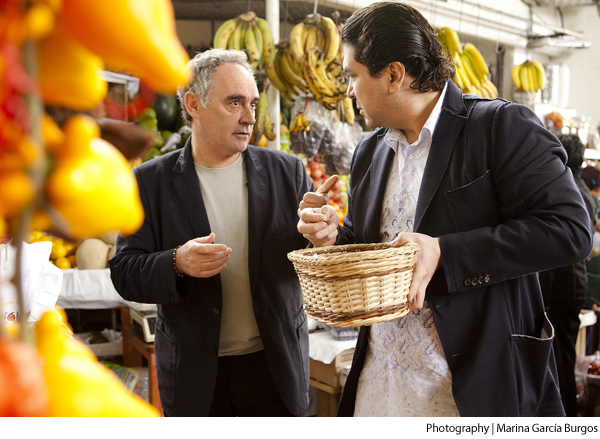 Remember the proverb about giving a man a fish versus teaching a man to fish? That ancient bit of wisdom was well at work in an inspiring documentary I saw last week about three of my favorite topics: Peru, food, and Peruvian food. I even got to meet its stars, both world famous chefs, and in the process was pleasantly surprised to learn something new about how a little creativity and imaginative thinking outside the proverbial box (another example would be micro-lending) can have implications for world economics and foreign policy, helping developing countries bootstrap themselves up rather than getting further caught up in the demoralizing foreign-aid dependence trap.

The occasion was the kickoff of a new marketing campaign from "Brand Peru," designed to drum up tourism and investment (even though both are already in pretty good shape at the moment), held at the Inter-American Development Bank in Washington, D.C. We were shown a snappy little video which of course included the obligatory ogling of the heights of Machu Picchu, but the main theme of the evening was the food in Peru, including plenty of tangy, tasty dollops of cebiche (aka ceviche, though the trade/tourism promotion board Promperu prefers the former spelling), and frothy little pisco sours, the national tipple made with the grappa-like brandy pisco -- especially as it relates to a campaign spearheaded by Latin America's top celebrity chef, Gastón Acurio (above, right) teamed up with Catalan Spanish superstar Ferran Adrià (above, left), who made "molecular gastronomy" and his restaurant El Bullì household terms among foodies. 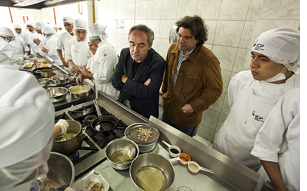 That effort, in fact, is the subject of the evening's main event, a 70-minute documentary (pictured at top and left) called Perú Sabe -- a play on words meaning both "Peru knows" and "Peru tastes" -- which follows Acurio and Adrià on a culinary tour of the country's main regions, including Lima, the Amazon, and the Andes. It's a colorful, sometimes emotional ride indeed.

You see, Acurio, a former punk rocker who at age 45 oversees a gastro-archipelago of more than 30 restaurants and various side projects in nine countries (including branches of his Lima original La Mar Cebichería in New York City and San Francisco), is on a mission. Peru's economic boom during the last decade has managed to cut national poverty pretty impressively, but even so, there are still millions of poor Peruvians with few prospects in life. So Acurio has set about enlisting the food arts in training kids to be chefs (or at least cooks) by founding the Pachacútec Culinary School in the desert north of Lima (arguably one of the more unusually sited cooking schools on earth), then providing graduates with paid internships at his various eateries. At last count, some 80,000 young people are being given hope -- and what's more, an actual leg up -- with valuable skills and experience that make them employable in good jobs for the first time in their lives. As Adrià pointed out at the Washington event, "This is unprecedented in history. And it's especially a lodestar for all of Latin America -- what's happening in Peru is being replicated throughout Latin America." And left unsaid is that there's no reason it couldn't also become a model for the entire developing world.

Separately, Acurio has also been actively working to promote la cocina peruana abroad, not just through his own restaurants but more broadly. Peru once gave the rest of us raw materials we couldn't imagine living without, including tomatoes, corn, peanuts, and potatoes. And now, having sampled it aplenty both in Peru and here in the States (here in Miami, Mistura and El Chalán are two of my favorite dining spots), I have to agree with The Wall Street Journal and quite a few other cognoscenti that Peruvian cuisine may be poised to sweep the world -- well, the Western world, at the very least. It's actually the original fusion cuisine, creatively using vibrant ingredients and fed by a cultural heritage that includes not only the obvious (Spanish and indigenous) but also immigration from China, Japan, Africa, the Middle East, Italy and other European countries. Ceviche is just the tip of another sea-spawned phenomenon -- the iceberg.

Finally, Perú Sabe highlights another little heralded but extremely promising development in recent years: a real degree of success in finally weaning Peruvian farmers away from coca destined for the illegal drug trade in favor of lucrative cash crops for high-end foodies, such as cacao and coffee. This, too, is unprecedented and needless to say has game-changing potential throughout Latin America and for the so-called war on drugs in the U.S.

No word yet on when and how Perú Sabe can be seen in its entirety by the general public, but you can check out the English-subtitled trailer below, or on the Perú Sabe website. Also below, you'll find the video of the event held at the Inter-American Development Bank in Washington, D.C. in October 2012. For more info about the country, log on to Peru.info.

The trailer from "Peru Sabe: Cuisine as an Agent of Social Change," a documentary starring celebrity chefs Ferran Adrià and Gastón Acurio that shows the remarkable social and culinary phenomenon that is happening in Peru.

Chefs Gastón Acurio and Ferran Adrià showcase Peruvian cuisine as an agent for social change at a "Cebiche & Pisco Party" held at the Inter-American Development Bank on October 23, 2012 in Washington, DC, marking the launch of the Brand Peru Campaign in the U.S.

David Paul Appell is CEO of social-media-management and online-content company EnLinea Media, as well as the travel/food social network Tripatini.com.