An ancient astronomical alignment in southern Peru has been discovered by researchers between a pyramid, two stone lines and the setting sun during the winter solstice. During the solstice, hundreds of years ago, the three would have lined up to frame the pyramid in light.

The two stone lines, called geoglyphs, are located about 1.2 miles (2 kilometers) east-southeast from the pyramid. They run for about 1,640 feet (500 meters), and researchers say the lines were "positioned in such a way as to frame the pyramid as one descended down the valley from the highlands."

Using astronomical software and 3D modeling, the researchers determined that a remarkable event would have occurred during the time of the winter solstice. [See Images of the Pyramid and Solstice Alignment]

"When viewed in 3D models, these lines appear to converge at a point beyond the horizon and frame not only the site of Cerro del Gentil [where the pyramid is], but also the setting sun during the time of the winter solstice," the research team wrote in a poster presentation given recently at the Society for American Archaeology annual meeting in Honolulu. 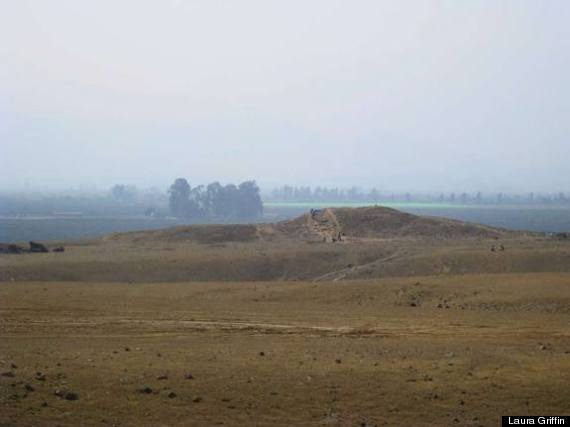 The flat-topped pyramid at Cerro del Gentil stands 16 feet (5 meters) tall and is made out of adobe. Pyramid artifacts found nearby the pyramid include textiles, shells and ceramics. A settlement nearby contained around 1,000 people.

"Thus someone viewing the sunset from these lines during the winter solstice would have seen the sun setting directly behind, or sinking into, the adobe pyramid," they write. "Thus the pyramid and the linear geoglyph constitute part of a single architectural complex, with potential cosmological significance, that ritualized the entire pampa landscape." (The word "pampa" stands for plain.)

The flattop pyramid is 16 feet (5 m) high and was built sometime between 600 B.C. and 50 B.C., being reoccupied somewhere between A.D. 200 and 400. Finds near the pyramid include textiles, shells and ceramics. The stone lines were constructed at some point between 500 B.C. and A.D. 400.

But this discovery is just the tip of the proverbial iceberg. Researchers have found about 50 of these stone lines so far in a flat, dry area near the pyramid. The longest of the lines runs for nearly a mile (about 1,500 m). These lines are straight and made out of rock, unlike the Nazca Lines in southern Peru which were etched into the earth by removing the topsoil and include depictions of animals and plants. [Image Gallery: The Nazca Lines of Russia]

Interspersed with these lines, researchers have also found more than 200 cairns (rock piles). The biggest of these cairns is about 50 feet (15 m) in diameter. Cairns can be found throughout the world and sometimes contain human burials, the examples found here, however, do not. 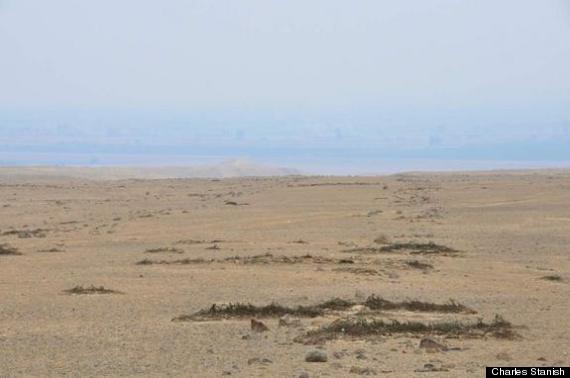 Researchers have found about 50 of these stone lines, the longest of which runs close to nearly 1 mile (1,500 meters). Many of these lines point to nearby settlements and their pyramids. The lines date to somewhere between 500 B.C. and A.D. 400.

The stone lines and cairns appear to be connected with nearby settlements and their pyramids. There are four ancient settlements close to them, two of which have large pyramids and one that has a mound. The settlements would have supported populations in the high hundreds or just over 1,000.

"Many of the lines do lead to the pyramids; most lead to within the area of the pyramid," said Charles Stanish, a professor at UCLA's Cotsen Institute of Archaeology, in an interview with LiveScience. "We did a statistical analysis, and it is statistically significant— it couldn't have been by random chance that they do cluster on these settlements," he said, noting that there are a few lines that don't lead to settlements.

Stanish said that the discovery of ancient lines leading to pyramids in Peru is important. "We have lines that run to pyramid complexes, and that's significant, because in the big Nazca pampa and in the Palpa pampa, we don't find that pattern as obvious." These two areas, Nazca and Palpa, contain lines, etched in earth, that depict various motifs, including animals and plants.

The team has only completed one field season at the site and will be heading back this summer to continue their work. They plan to excavate at the Cerro del Gentil pyramid and search for more stone lines.

"We're also going to do a systematic survey of a fairly large area to find all the other lines and all the other settlements and features," Stanish said. They also plan to dig test pits in structures associated with the lines to try to determine precisely when they were built.

One problem the team faces is that time is against them. "A lot of them [the stone lines] are being destroyed by construction," said Stanish, explaining that modern-day power and gas lines are being built in the area, jeopardizing the ancient stone lines that have stood for well over a millennia.