Massachusetts boasted a 60 percent kill rate. Vermont claimed up to 69 percent. And, in Texas, a preliminary report suggested that aerial spraying of pesticides eliminated 93 percent of disease-carrying mosquitoes in some neighborhoods.

Over the last couple months, officials from across the country have engaged airplanes armed with pesticides in an attempt to battle mosquitoes that carry the West Nile virus, on track to infect more people this year than ever before in the U.S., and eastern equine encephalitis, a less common but generally more dangerous disease. The decisions to spray have often been made under heated opposition from residents and some scientists concerned about what they say is an ineffective and unsafe strategy. Nevertheless, in at least a few cases, officials subsequently reported high success rates and few health complaints.

"This is what we hoped to see. It's a meaningful reduction," said Roger Nasci, chief of the arboviral diseases branch of the U.S. Centers for Disease Control and Prevention, referring to very preliminary data from Dallas that suggested mosquito kills as high as 93 percent from aerial sprays in late August. "All things together, no one is going to say it is 100 percent positively safe. But the level of concern for risks to human health is low and certainly outweighed by the risk of West Nile."

Some remain skeptical, going as far as to threaten legal action.

"I don't believe those figures. Frankly, I don't think they're real," said David Pimentel, an emeritus professor at Cornell University, when shown the reported kill numbers from Massachusetts, Vermont and Texas. "I've done enough to know that it's not easy to kill those little devils. And measuring the kill of mosquitoes is not easy to do."

Kyla Bennett, director of the non-profit New England Public Employees for Environmental Responsibility, acted on her doubts. On Aug. 8, after reading a press release that reported July aerial sprays across nearly 500,000 acres of southeastern Massachusetts had killed approximately 60 percent of eastern equine encephalitis-carrying mosquitoes, she filed a public records request for the supporting data. Two weeks later, on Aug. 22, she appealed to the state, noting that she had not yet received any records backing up the kill claim. A response from the state supervisor of records arrived in her mailbox Monday, saying the Department of Public Health is "identifying records responsive" to her request.

"How hard could it be to search for that data? It should be at their fingertips if they issued this press release," said Bennett, a former U.S. Environmental Protection Agency worker who lives in southeastern Massachusetts. "This makes me even more suspicious that the 60 percent number isn't accurate.

"We are thinking of taking legal action at this point," Bennett added.

The Huffington Post also filed a formal public records request for the data on Monday, after being repeatedly told by the state Department of Public Health they had no one available to speak.

"It is important to know how these numbers were generated," said Jay Feldman, executive director of the non-profit Beyond Pesticides. "The burden is on the regulator to show that there is efficacy. The data that is available calls that into question."

Some of the data questioning aerial spraying's effectiveness comes from the research of Cornell's Pimentel, who has found that up to 90 percent of an aerial spray misses the target and drifts away into the environment, poisoning beneficial insects such as bees.

Under ideal conditions -- with few trees to block the chemicals' descent and calm weather -- Pimentel suggested it might be possible to kill 60 percent of the mosquitoes. Southeastern Massachusetts is heavily wooded and Pimentel added that any success may be short-lived given the short life cycle of the mosquito. Post-spray mosquito counts around Dallas, for example, were generally completed within a day or two and compared with counts from the weeks prior to the spray.

Further, Pimentel said he is concerned that spraying contributes to the development of pesticide resistance in mosquitoes, which may lead to less successful efforts against mosquito-borne diseases in the future. As HuffPost previously reported, this issue is being addressed by California officials, who added more toxic pesticides to their aerial spray cocktail this year.

Charles Apperson, a public health entomologist at North Carolina State University, said he is less concerned. "If you make repeated sprays over years, there is potential for resistant populations to develop," he said, referencing the well-known resistance resulting from the ongoing use of pesticides in Africa to combat malaria. "But in a place like Dallas, where they hardly ever spray, there is not much danger of resistance."

Some individuals who oppose spraying have also raised concerns that exposure to even minute doses of the EPA-approved pesticides used in aerial spraying could pose risks to human health, from asthma attacks to hormone problems. At particular risk, they say, are children.

"I am worried," said Vanessa Van Gilder of Dallas, who launched a Change.org petition opposing the aerial spraying that, as of Tuesday, had accumulated 2,127 signatures. "How many times have they told us something was safe and then 10 years later it comes out that it's not safe?"

While Nasci and Apperson said they doubt any meaningful health risks are posed by the tiny pesticide droplets -- often less than one ounce per acre is used -- everyone interviewed agreed that the most important component of mosquito control is addressing the pests before they take to the air as adults. That means applying larvacides to mosquito breeding grounds, including standing water. It also means educating residents on how to eliminate standing water and of the importance of personal protection such as bug sprays and clothing that fully covers the skin.

"I'm not terribly in favor of spraying, but during times when people are getting sick and dying, we have to take action," said Apperson. "When you have a disease outbreak, the quickest way to bring down and stop transmission is by aerial spraying." 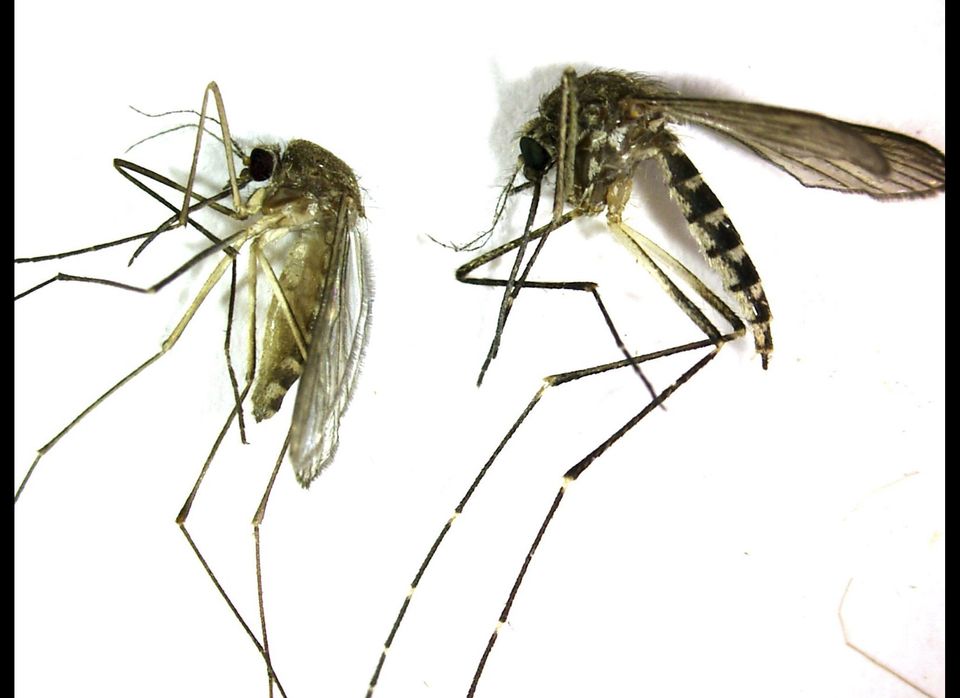 1 / 26
This undated photo provided by the Northwest Mosquito Abatement District shows a Culex pipiens, left, the primary mosquito that can transmit West Nile virus to humans, birds and other animals. It is produced from stagnant water. The bite of this mosquito is very gentle and usually unnoticed by people. At right is an Aedes vexans, primarily a nuisance mosquito produced from freshwater. It is a very aggressive biting mosquito but not an important transmitter of disease. (AP Photo/courtesy the Northwestern Mosquito Abatement District)
AP