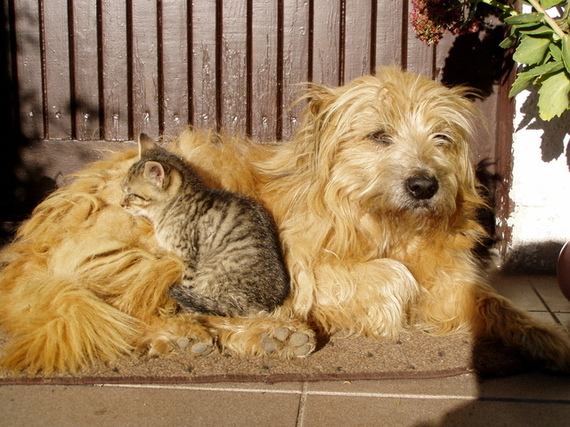 We used to have a terrible pet overpopulation problem in the United States. Intake at the Los Angeles city shelter in 1970 was 144,000 animals. Today it's less than 18,000 per year. In New York City, the number of animals taken in by the city shelter fell from 136,035 cats and dogs in 1974 to about 30,000 today. Similar falls in shelter intake happened all over the country starting in the 1970s.

There were also lots of animals in the environment in the 1970s who never came to the shelter. It was very common in those days to encounter homeless or stray animals in the street, or to hear from friends and neighbors that they had found a stray animal or that they had a litter of puppies or kittens they needed to place. Today in most cities it is rare to see strays living in the street, and the number of puppies brought to shelters is small. "Kitten season" still occurs, but at a lower volume in many places.

The reason most commonly cited for the drop in the number of homeless pets is that around 1970 private veterinarians began to recommend spaying and neutering for their clients' pets as a routine part of veterinary care. The first low-cost spay-neuter clinics started opening up in the 1970s, and that may have spurred the veterinary profession to take action to avoid losing that business. Another factor may have been that it was not until the 1970s that spay and neuter surgeries were safe enough for private veterinarians to feel comfortable recommending them. In any event, the spay-neuter rate for owned pets went from perhaps 10% in 1970 to 85% or more today.

There might have been other factors that contributed to the drop in shelter intake. Attitudes toward pets were evolving in the 1970s, and people began to view their pets as family members. And in the 1970s and 1980s many communities passed leash laws, which helped reduce the number of free-roaming dogs.

It seems doubtful that today's No Kill communities could have evolved without the huge drop in shelter intake since 1970. Comprehensive nationwide statistics on shelter intake are not available, but from the data we have on individual shelters and from various surveys that were made, it appears as though shelter intake per person was about five times higher in 1970 than it is today. It is hard to imagine today's No Kill communities being able to maintain 90% and above live release rates if their intake was five times as high.

People often think that the reason animal shelters killed some 90% of their intake in the 1970s was because shelters in those days were run by workers who did not care about animal lives. That's a misperception. Given the overwhelming number of homeless animals, shelter workers back then were faced with the reality that there were not enough homes. Adoptions were like a game of musical chairs. An adoption from a shelter simply meant one less home for a stray living in the street or for a puppy or kitten from someone's "oops" litter. That did not make the killing acceptable, but shelters were in a situation with no good choices.

Starting in the 1990s there were several innovations that were critical to No Kill. The fall in shelter intake was boosted by trap-neuter-return (TNR) and return-to-field (RTF) programs, which have been game-changing for cats. TNR was largely unknown until the 1990s and RTF is a recent practice. Petfinder, which started up in the mid-1990s, was very important in boosting shelter adoption rates and encouraging the formation of all-breed rescues. Also in the mid-1990s Richard Avanzino started to attend national conferences to publicize the techniques for increasing live releases that he had perfected at the San Francisco SPCA from 1976 to 1989. And the first course in shelter medicine was taught in 1999.

By the year 2000, the basics for No Kill to succeed were in place and it was a matter of spreading the word, continuing to develop techniques, and building the infrastructure. The traditional shelter industry was slow to catch on because it was collectively suffering from a type of learned helplessness due to its decades of dealing with overwhelming shelter intake. It needed to be pushed by the No Kill movement to realize that times had changed and it was possible to save more and more shelter animals.

Today there are still quite a few regressive shelters, but the shelter industry as a whole has gotten the message and is solidly behind No Kill. Things are rapidly improving, and at this rate we could very well have a majority of No Kill communities in the country by 2020.

Blogger on animal shelter issues at Out the Front Door